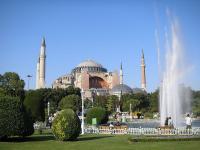 Turkish Prime Minister Recep Tayyip Erdogan Sunday at a meeting with his visiting Macedonian counterpart Nikola Gruevski in Istanbul reiterated his support for Macedonia’s Euro-Atlantic integration and backed the country in its “name” dispute with Greece.

At the meeting Erdogan underlined that he felt Macedonia should be a fully-fledged NATO member and called on Greece not to make problems and to “let Macedonia to be called Macedonia”.

He called Athens to let go of “unimportant affairs” such as the Macedonian name issue in the interest of the region’s stability.

Last year Athes blocked Skopje from entering NATO due to the unresolved name spat. Greece insists that Macedonia must change its constitutional name as it implies Skopje’s territorial claims towards its own northern province which is also called Macedonia.

Greece is also set to prevent the EU from extending a start date for Macedonia’s acession talks at the EU Council meeting that kicks off on Monday in Brussels. Observers say that a last minute breaktrough in the name talks is unlikely to happen.

“Turkey is our great supporter and friend, as it was demonstrated today as well,” Gruevski said at the end of his visit.

The meeting also focused on boosting economic cooperation. Representatives of some 200 Turkish and 100 Macedonian companies attended the Macedonian Business Forum in Istanbul along with Gruevski’s visit.

Turkey is seen as one of the most important regional political and economic partners of Macedonia. Turkish goods and enterprises already play a significant role in Macedonia.

Iraq announces redeployment of troops to borders with Iran and Turkey