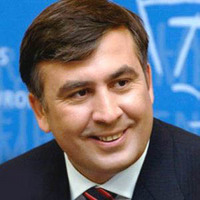 The Nagorno-Karabakh conflict must be resolved with respect for state sovereignty of Azerbaijan, Georgian President Mikheil Saakashvili said.

“There is only one way for solving all problems. These are the direct negotiations of these countries and taking into account the international law, including the right of people to return to their place of residence, and respect for state sovereignty,” Saakashvili said.

The conflict between the two South Caucasus countries began in 1988 when Armenia made territorial claims against Azerbaijan. Armenian armed forces have occupied 20 percent of Azerbaijan since 1992, including the Nagorno-Karabakh region and 7 surrounding districts. Azerbaijan and Armenia signed a ceasefire agreement in 1994. The co-chairs of the OSCE Minsk Group – Russia, France, and the U.S. – are currently holding the peace negotiations.

Armenia has not yet implemented the U.N. General Assembly’s resolutions on the liberation of the Nagorno-Karabakh region and the occupied territories.

He said the Nagorno-Karabakh problem is complicated. A main key to this problem is Russia.

” I think that countries must talk, people must communicate to achieve good results. As to the negotiations held between Turkey and Armenia, everything, of course, should be coordinated with Azerbaijan, ” Saakashvili said.

He said the talks are always good. Any progress is always a positive trend.

“I do not want to call this situation as the status quo. As our situation has shown, the status quo does not exist. Whenever there is such a situation, one must always be careful to avoid complications and deterioration”, Saakashvili said.