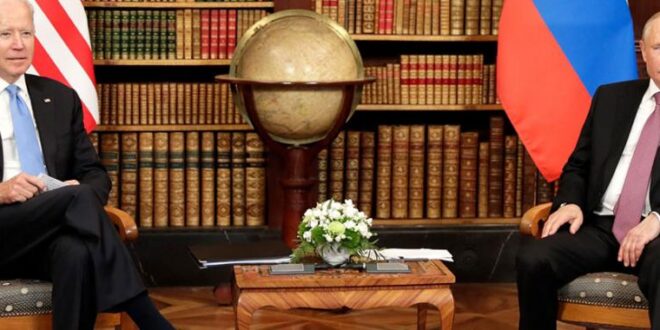 Russia and the US: The ‘Red Lines’ Summit

US President Biden skilfully managed the summit with his Russian counterpart, and succeeded in passing on to Moscow some key messages. But that won’t make US–Russia relations more predictable.

After a week of hugs and back-patting from the US’s closest allies in the G7, NATO and the EU, US President Joe Biden has just concluded the trickiest part of his European tour: a summit with Russian President Vladimir Putin.

And up to a point, this encounter was a success. There were no public embarrassments, diplomatic faux-pas or open clashes between the two leaders as many detractors had predicted. The only public excitement was provided by a stampede at the start of the summit, as the pack of unruly journalists was abruptly pushed away by less-than-gracious security officers.

The conversations between the two presidents lasted less than three hours in total, shorter than originally planned. Still, both leaders said afterwards that the time was more than adequate for conversation, and President Biden even suggested that discussion was very detailed on several topics – not least on weapons systems. Both sides described the talks as constructive. Biden and Putin also agreed on the return of their ambassadors to their respective capitals, thereby reversing the tit-for-tat expulsions and other hostile moves of the past few months. They also decided to start expert-level consultations on cyber security issues and on ‘strategic stability’, including but not limited to possible new agreements to limit nuclear weapons.

Still, the summit’s main achievement is to serve as, at best, an impetus for further negotiations. These may result in the creation of a framework for better management of relations between the two powers. But they are unlikely to generate a truly predictable environment in broader US–Russia dealings.
Misplaced Criticism, Careful Preparations

President Biden’s decision to hold a summit with his Russian counterpart attracted predictable brickbats from the usual assembly of experts, retired diplomats, and media commentators. Some critics objected to the initial timing of the enterprise. Washington and Moscow made public their agreement to hold a summit in April, just as Russian troops were massing at the borders of Ukraine; the summit, critics alleged, would be seen as rewarding Putin’s strong-arm tactics.

Others raised objections to the very principle of a meeting with Putin; the man should be treated as an international pariah, they claimed, and any meeting between the two would – supposedly – be ‘spun’ as a victory by the Russian leader. And then, there was the avalanche of newspaper articles of the ‘here is what Biden should tell Putin’ variety, written by those convinced that the US president could not do without their advice.

The US administration was undoubtedly right to ignore most of these arguments. For, as President Biden repeatedly pointed out, the very act of meeting a foreign leader cannot be construed as approval for that leader’s actions, and ultimately, ‘nothing replaces a one-on-one’ meeting.

Besides, the US administration prepared the summit very carefully. Unlike Donald Trump, who went to such a meeting without preparing the ground with the US’s European allies and therefore elicited plenty of fears and speculation, the latest summit took place after Joe Biden had met with most European leaders, either within the framework of NATO or the EU.

To be sure, the foreign minister of Poland still complained that the central and eastern Europeans were not fully consulted. But some nervousness from the countries formerly ruled by Moscow was to be expected. And the US planners went out of their way to minimise any other risks.

The two presidents, for instance, did not have a meal together; there was no ‘breaking of bread’, as a US official anonymously put it. Biden also turned down Putin’s request for a joint press conference, an event which would have turned into an unproductive duel between the two presidents, with Putin – who faces fewer media restrictions – undoubtedly being able to land a few memorable phrases that would have gone down as the real message of the summit. So, in the early evening of yesterday, the two presidents faced the media one after the other.

Putin may have looked sprightlier in comparison to a somewhat exhausted Biden. But ultimately it was Putin who, at least in media terms, came out worse from this encounter. Every question relating to Russia’s human rights record was turned into Russian grievances over the alleged lack of respect for human rights in the US, the sort of cynical ‘whataboutism’ with which those following Moscow’s tactics are already familiar.

Most of Putin’s supposed comparisons with the US were just absurd – particularly when the Russian leader compared the unjustified arrest of opposition leaders in Russia to the storming of the US Capitol in Washington in January this year, and when he asserted (without naming him) that Alexei Navalny, Russia’s leading opposition figure, knew that he would face a jail sentence after seeking medical refuge in Germany for a poisoning attack perpetrated by Russia’s own security services.

It is questionable whether even ordinary Russians listening to Putin’s perorations were persuaded by such nonsense. But what is not in question is that by allowing Putin to face the media on his own, Moscow’s propaganda was neatly deflected.
Some Results

There are other advantages to being the most experienced US president in foreign policy terms in three decades. President Biden is not known for being soft on Russia. A decade ago, he claimed to have told Putin to his face that the Russian leader ‘had no soul’. More recently, the US president agreed with a reporter’s characterisation of Putin as a ‘killer’.

And, as he prepared to meet his Russian counterpart, Joe Biden did not speak of a ‘reset’ – such as the radical reconfiguration of the relationship between Washington and Moscow attempted by Barack Obama – nor did he plan to invite Putin to a family barbecue in the US, as George W Bush did two decades ago.

Instead, US officials deliberately downplayed the anticipated outcomes. The president – as Jake Sullivan, Biden’s national security adviser, put it – wanted ‘to be able to look President Putin in the eye and tell him: “here are the American expectations”’. The purpose of the exercise was to let Putin know what the ‘red lines’ in the relationship between the two powers were, and to deal with the steady disintegration of the arms control regime.

As soon as he entered the White House, Joe Biden decided to renew the New START treaty for a further five years; this limits the number of nuclear warheads and launchers deployed by Russia and the US. But the rest of the arms control architecture has evaporated. In 2002, George W Bush withdrew the US from the Anti-Ballistic Missile Treaty, which aimed to limit anti-missile defence systems. In 2007, Russia did the same with the Treaty on Conventional Armed Forces in Europe, which regulated conventional weapons. Then, in 2019, it was Trump’s turn to denounce – following a Russian violation – the Intermediate Nuclear Forces Treaty, which affected weapons with a range of 500 to 5,500 kilometres. Finally, as of 2021 both countries have also withdrawn from the Open Skies Treaty.

Now, the two countries have agreed to a return of their respective ambassadors, recalled by Moscow in March and then Washington in April as the disputes between them intensified. They have also agreed to start nuclear negotiations to replace the New START treaty, a longer-term project given that the current treaty expires in 2026.

Depending on how such talks are conducted, they could become important, for they may address other nuclear weapons and delivery systems not covered by New START, non-strategic nuclear weapons that have not previously been subject to nuclear arms control, and particularly delivery systems such as the new Poseidon nuclear-tipped torpedoes and the Burevestnik nuclear-powered, nuclear-armed cruise missile.

Russia also apparently gave assurances that it has no intentions of militarising the Arctic, even though President Putin spent a good chunk of his press conference in Geneva talking about his strategic ambitions in the region. And the two powers agreed on a dialogue about cyber security, notwithstanding the fact that, immediately after the summit, Vladimir Putin returned to the charge that ‘the greatest number of cyber attacks in the world come from the American space’.

There is no question that the US president achieved his primary objective, which was to tell Putin what the US’s ‘red lines’ in the relationship really are. On cyber security, Biden apparently communicated to his Russian counterpart a list of 16 strategic US sites – in sectors such as energy, water, food, health and telecommunications – which should be considered ‘untouchable’ by Russian-based hackers or ransomware crooks under penalty of US reprisals of an unspecified but very serious nature. Arguably, this was one of the most consequential elements in Biden’s statement, especially since repeated references were made by the US president to Russia’s own vulnerable oil pipelines, on which much of the country’s vital hard currency exports depend, as well as to the US’s well-known capabilities in cyberspace. The US president also stressed that he had addressed the issue of Ukrainian sovereignty, as well as that of human rights in Russia, again establishing US ‘red lines’ in these areas.
And Just Aspirations

Ahead of their meeting, the two leaders expressed their hope for a more stable and predictable relationship, and they concluded their summit with the publication of a communique pledging that the two sides would ‘embark together on an integrated bilateral Strategic Stability Dialogue […] that will be deliberate and robust’.

But it is here that US expectations are most likely to be disappointed. For although President Biden was careful to refer to Russia in respectful terms as a ‘great power’, and even once implied that the US and Russia enjoy a sort of global parity in status, the reality is that Russia’s entire economy in purchasing power parity (PPP) terms is just slightly above that of, say, Brazil or Indonesia, and its defence expenditure is not more than a fifth of that of the US, again in PPP terms.

Consequently, the only way Putin can hope to be taken seriously is precisely by remaining unpredictable; to seek predictability from Russia today is tantamount to trying to reinvent a different Russia to the one we currently have.

Perhaps Putin still had the best words in summing up the outcome of the Geneva summit when he quoted the writer Leo Tolstoy: ‘There is no happiness in life, only its glimmers’.

Post Views: 145
Previous UK Must Follow Through on G7’s Commitment to Combat Illicit Finance
Next In Yemen, Competitors Lay the Ground for the Long Haul