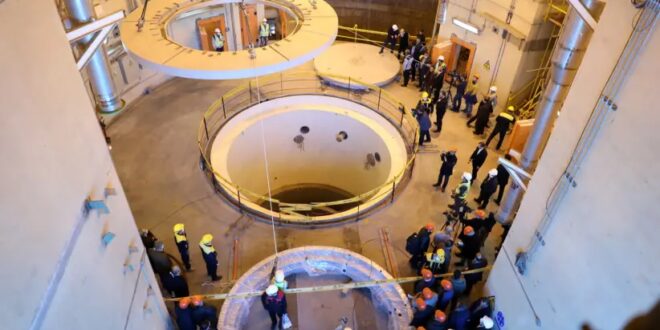 40 years since Operation Opera, attack against Iran ‘would be different’

Unlike the raid on Iraq’s Osirak nuclear project, Iran’s nuclear sites are spread across the country, some deep underground or in mountains, surrounded by air defense systems.

Forty years after Israel destroyed Iraq’s fledgling nuclear program, one of the pilots who took part in Operation Opera warned that an attack against Iran’s nuclear reactors “won’t be the same.”

The strike at the heart of Saddam Hussein’s nuclear program at Osirak outside Baghdad in 1981 was, and remains, one of Israel’s most daring raids.

But any operation to take out the Iranian nuclear program “won’t be the same; it can’t be the same,” Brig.-Gen. (ret.) Relik Shafir told The Jerusalem Post. In Iran, “it’s all very different, especially how they built their program.”

Unlike in Operation Opera, Iran’s nuclear sites are spread across the country, some deep underground or in mountains, and surrounded by sophisticated air-defense systems.

Shafir was one of eight IAF pilots selected for the mission, including one who would one day become the country’s first astronaut. It was Ilan Ramon’s first operational mission, but not Shafir’s, who was the second youngest of the pilots.

While the years have flown by, “the situation remains the same,” Shafir said. “It’s complicated, and pilots need to carry out their missions as best they can.

“It’s a different world 40 years later, but the interests and motivations of humans remain the same. The Middle East and our conflict remains, even though at the time it was with Iraq, and now it’s with Iran.”

“In terms of pilots, they need the same dedication and mentality,” he said. “The weapons will be different; many other things can be different. But the professionalism asked from them will be the same.”

But “only the Americans can stop the Iranian nuclear program,” Shafir warned. “It might not be one strike, but it could be several weeks.”

When he was told about the target of the mission – Saddam Hussein’s Osirak nuclear reactor, some 1,000 miles away in Iraq – he was in shock.

“I didn’t know that there was a nuclear reactor in Iraq; we didn’t have the Internet back then,” Shafir said. “Baghdad was a place that the Israel Air Force never got to before. The F-16 was also a new plane for us, and we had never flown it before. It seemed a little out of place. It was a few seconds of shock, and then we recovered and started to understand and train for the mission.”

It took another six months of training, including learning how to strike a target surrounded by air-defense systems, before Shafir and seven other pilots got into their planes and took off for Baghdad.

On June 7, 1981, Shafir was in one of eight F-16 fighter jets that flew into enemy territory and executed the attack. They had two missions: to take out the reactor “and to return home,” he said.

According to Shafir, before the pilots took off, IDF chief of staff Lt.-Gen. Rafael Eitan gave them food and 1,000 Iraqi dinars should their plane be shot down and they needed to purchase a way back to Israel.

“The chief of staff told us the most important thing would be to return home,” he said. “We thought at least two planes would be shot down, and Ilan [Ramon] and I both thought we would be shot down because we were last. It was a tough feeling that we couldn’t get rid of. But we knew it was a historical mission; that we knew that even if we died, it was a mission we had to do.”

Once the pilot closes the cockpit of his plane and until he lands, he is a “RoboCop” on autopilot, with only his mission in mind, Shafir said.

“You are alone with your feelings,” he said. “It’s something that we are aware of, and we learn how to control our emotions so we can carry out our professional duties. You need to be like RoboCop as long as you are in the cockpit, because the moment you start thinking of what could happen, it’s not good.”

Ten Iraqi soldiers and one French civilian were reportedly killed in the strike. All Israeli pilots landed safely at their bases.

When they all landed safely, “it was like I returned to life,” Shafir said. “Ilan and I hugged for a minute, without talking. When our feet touched the tarmac, the pressure we had on our shoulders for half a year had been lifted.”

Shafir later commanded the Tel Nof Airbase and Hatzor Airbase’s pilot school. He also served as a foreign press spokesperson for the IAF during emergency situations. He is now chairman of the board of Yamasee Ltd., a crowdsourced data-driven app that provides pilots with real-time turbulence information.

But 40 years after the strike on Iraq and another Israeli strike on Syria’s nuclear reactor in the province of Deir Ezzor in 2007, tensions are now at an all-time high between Israel and Iran.

Jerusalem has warned that it will not allow Tehran to succeed in its nuclear project, and senior officials, including Defense Minister Benny Gantz and IDF Chief of Staff Lt.-Gen. Aviv Kohavi, flew to Washington to warn against reentering the nuclear deal with Iran.

And that has led Israel to once again ready plans to potentially strike the Islamic Republic’s nuclear facilities before it’s too late, the source said.

“There will be no choice [now] but to go back and prepare attack plans for Iran’s nuclear program,” the source said. “This will require budgets and the reallocation of resources.”

Israel has warned repeatedly about Iran’s nuclear ambitions, as well as aspirations of regional hegemony. Jerusalem has admitted to hundreds of airstrikes as part of its “war between wars” campaign to prevent the transfer of advanced weapons to Hezbollah in Lebanon and the entrenchment of its forces in Syria, where they could easily act against the Jewish state.

The Israeli pilots who might get the order to strike at Iran’s nuclear program need to internalize the responsibility that might be placed on their shoulders, Shafir said.

“There is one pilot for every plane, and if he doesn’t take off, no one else will,” he said. “There’s no way to turn around. There’s 20 seconds from when the pilot identifies the target to when he drops the munition. That’s 20 seconds of your career that you trained for to deliver the munition to the target. That’s your responsibility.”

Post Views: 440
Previous Turkey is radicalizing extremists to attack Kurdish women
Next Is the ‘hardliner’ talking point about Iran’s Raisi a whitewash?