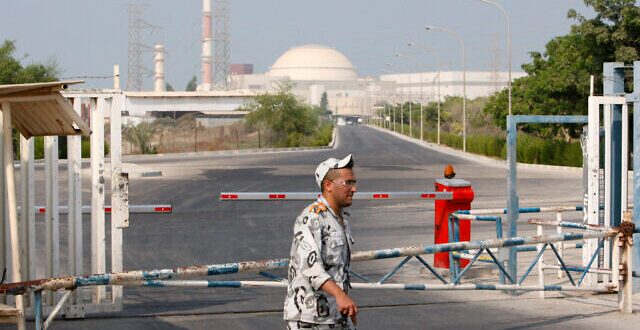 Bushehr facility taken off power grid for a number of days; national electricity company calls on Iranians to minimize consumption during peak hours

Iran’s southern Bushehr nuclear power plant has been temporarily shut down over a “technical fault,” the country’s atomic energy body said in a statement.

“Following a technical fault at Bushehr power plant, and after a one-day notice to the energy ministry, the plant was temporarily shut down and taken off the power grid,” the Atomic Energy Organization of Iran said on its website.

The statement said the plant will be reconnected to the grid and the issue will be resolved “in a few days,” but did not elaborate further.

Iran’s national electricity company had in a statement on Sunday called on Iranians to minimize consumption during peak hours due to a “predicted rise in temperature” and “limitations in power generation due to ongoing repairs at [the] Bushehr plant.” The company said that the repairs may continue until the end of the week, which is Friday in Iran.

The Bushehr plant, which produces 1,000 megawatts of power, was completed by Russia after years of delay and officially handed over in September 2013.

In 2016, Russian and Iranian firms began building two additional 1,000-megawatt reactors at Bushehr. Their construction was expected to take 10 years.

Iran’s Gulf Arab neighbors have often raised concerns about the reliability of the Bushehr facility and the risk of radioactive leaks in the event of a major earthquake.

In April, Bushehr province was shaken by a 5.9-magnitude earthquake, leaving five people injured but causing “no damage” to the nuclear complex, according to authorities. There have been no significant earthquakes reported in the area in recent days.

Construction on Bushehr, on the coast of the northern reaches of the Persian Gulf, began under Iran’s shah in the mid-1970s. After the 1979 Islamic Revolution, the plant was repeatedly targeted in the Iran-Iraq war. Russia later completed the construction of the facility.

The plant, which sits near active fault lines and was built to withstand powerful quakes, has been periodically shaken by temblors. There have been no significant earthquakes reported in the area in recent days.

Last month, an explosion at a petrochemical site in the Bushehr province killed one worker and injured two others.

Numerous explosions have been reported over the past few years in complexes vital to Iran’s nuclear program and its energy and military sectors, most notably an alleged sabotage at the Natanz atomic plant and the killing of the regime’s top nuclear scientists in two separate incidents last year.

Some of the incidents have been said to stem from technical malfunctions, while others have been blamed by the Islamic Republic on its enemies, including the US and Israel.