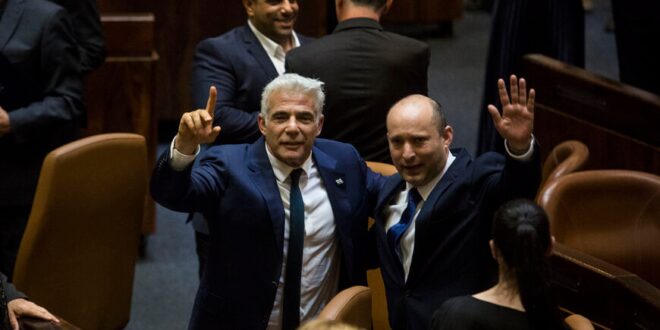 Foreign Minister Yair Lapid plans to travel to the United Arab Emirates June 29-30 in the first ever Israeli ministerial visit to the country.

The Israeli press reported June 20 that Foreign Minister Yair Lapid is planning to travel to the United Arab Emirates next week for a two-day visit. It will be his first foreign trip since taking up his post, and the first visit ever of an Israeli minister to the country. Lapid’s spokesperson said June 21, “Israel-UAE ties are an important relationship whose fruit is enjoyed not only by the citizens of the two countries, but the entire Middle East.”

The Israeli minister is set to meet with his Emirati counterpart Abdullah bin Zayed Al Nahyan. It is not yet known if he will also meet with the Emirati monarch. Lapid is also expected to inaugurate the Israeli Embassy in Abu Dhabi and the Israeli Consulate in Dubai.

After the signing of the Abraham Accords normalizing ties between Israel and the Emirates and Bahrain, then-Foreign Minister Gabi Ashkenazi was invited by his Bharani counterpart Abdullatif bin Rashid Al Zayani to participate in the international 2020 Manama Dialogue conference. Ashkenazi was thus set to be the first Israeli minister to officially visit to Bahrain, where he would inaugurate Israel’s embassy in Manama. Eventually, the visit did not take place, as then-Prime Minister Benjamin Netanyahu decided no ministers would visit either Bahrain or the Emirates before he made the trip.

Netanyahu was scheduled to visit both countries during the last election campaign. But on March 11, shortly before he was due to depart, Netanyahu was forced to cancel his visit to the Emirates, as Jordan had delayed its approval for the plane to pass through its aerial space.

Evidently, unlike Netanyahu, new Prime Minister Naftali Bennett has set no conditions for Israeli ministers to visit Gulf countries. The Israeli press reports that Bennett plans to focus on internal affairs, leaving to a great extent Israel’s external relations to his coalition partner Lapid. After the trip was announced, Bennett tweeted, “Foreign Minister Yair Lapid will be the first Israeli minister to arrive for an official visit at the Emirates. This is an important historic event. Israeli-Emirates relations are an important part of Israel’s foreign policy and we will work to deepen them. Good luck Yair.”

Lapid made his intentions clear in his inauguration speech June 14. Addressing Foreign Ministry staff, Lapid said, “Part of our work will of course be to strengthen our presence in the region. Great things have happened this past year. We need to continue the development that started with the Abraham Accords, to work to strengthen the peace with the Gulf states, with Egypt and with Jordan. We will work to sign agreements with more countries in the region and beyond. It’s a process — it won’t happen in a day, but the Foreign Ministry will coordinate those efforts.”

Shortly after taking office, Lapid spoke on the phone with the Emirati foreign minister. The office of bin Zayed noted that the two discussed “bilateral cooperation between the two countries in addition to the Abraham Accords,” adding that bin Zayed congratulated Lapid on his new position and wished him success.

On the Bahraini side, Crown Prince Salman bin Hamad bin Isa Al Khalifa issued a statement June 14 congratulating Bennett and Lapid on the formation of a new government, expressing his wish that the newly formed government will enhance development, stability and peace in the region and the world.

Lapid and Bennett’s early engagement with the Emirates and with Bahrain and the two states’ positive reactions are building the framework for the new government to deepen Israel’s relations with both Gulf countries and to explore possibilities of ties with other Muslim and Arab countries. But the moves go further, signaling a change of modus operandi.

During the Netanyahu era, contacts with the two Gulf states, with Sudan and with other Muslim countries, were mostly handled by Mossad Chief Yossi Cohen and national security adviser Meir Ben Shabbat. Both men served as personal emissaries of Netanyahu, who sidelined the Foreign Ministry completely. Since then, Cohen has finished his mandate and Ben Shabbat is expected to be soon replaced, probably by Gen. Amos Yadlin. Lapid has said very clearly that he intends to bring the Foreign Ministry back to the forefront of Israeli diplomatic relations.