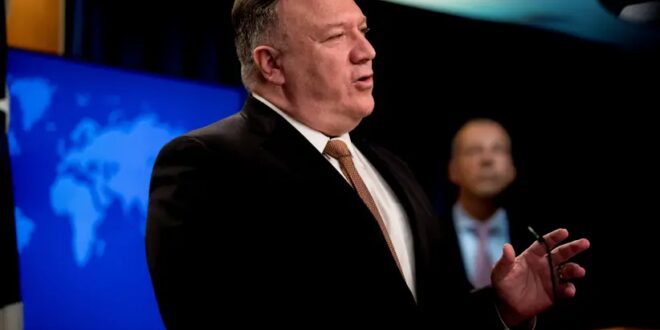 Pompeo to ‘Post’: Iran unwound nuclear deal in a matter of months

The Mossad-CIA story in the Mike Pompeo, Yossi Cohen era

It would be foolish for the Biden administration to return to the Iran nuclear deal when it can see the Islamic Republic was able to unwind from the nuclear limitations in a mere matter of months, former US secretary of state Mike Pompeo has told The Jerusalem Post.

Pompeo was addressing questions about whether Trump administration sanctions policies were effective when one of the results was a jump by Iran to higher levels of uranium enrichment, such as the 20% and 60% levels.

“Regarding the level of enrichment issue – the fact that now they are at 60% doesn’t prove the decision to withdraw from the JCPOA [Joint Comprehensive Plan of Action, the Iran deal] was a mistake. A commitment not to enrich when you have the capacity to do research on advanced, more capable centrifuges is folly,” he said.

The former secretary of state and CIA director continued, “If I have the capacity to do centrifuges, I can turn up the pressure. You can enrich anytime you choose: in 2017, 2019, 2021, 2029. It is foolish to think that for anything which you can do in a matter of months, you should sacrifice: 1) billions of dollars, 2) allow assassinations throughout Europe, 3) allow the missile program to develop and 4) allow terror in the Middle East.

“It is foolish and naïve. I hope the Biden administration will have learned its lesson,” he added.

Next, he was confronted with criticism even from some who criticized the JCPOA, but thought the US should not have withdrawn so early in 2018, but should have waited to withdraw until near the end of the deal’s nuclear limits in 2024 or 2029. The idea would have been to reap the benefits of Iranian compliance with uranium enrichment limits and to challenge Tehran only when those limits were close to expiring.

“It would have been too late, and it is not too late today. Iran has not been in full compliance with its undeclared sites promises. The [Mossad-obtained Iranian nuclear] archives released [show] they lied about past military dimensions,” stated Pompeo.

Moreover, he said, “The entire basis of the deal was fundamentally flawed. We now know for sure that they lied about that. They continue to lie today. Probably – and I can’t say a whole lot more – we picked the precise [right] moment to begin the effort. They have increased enrichment for Iran to receive massive concessions…. The EU wants to give [concessions to] them. The Russians and the Chinese are in league to give them. I hope the Biden administration will see this isn’t 2015.”

In addition, he explained, “The Iranians have no intention of ceasing to seek a nuclear weapon…. In spite of the fact that [former US president Barack] Obama said it was put in a box to prevent this. That was a lie. The AMAD program and derivations of that program spread out.”

“The SPND [Organization of Defensive Innovation and Research focused on nuclear issues] – they were continued. They used the tools they had available to be closer to the moment when they could deliver a nuclear weapon. That is dangerous. There is no reason to give billions of dollars to fortify those programs,” Pompeo declared.

SHIFTING TO discuss his uniquely close relationship with Yossi Cohen, who directed the Mossad from January 2016 until June 1, 2021, Pompeo said, “My relationship with director Cohen began very shortly after I became director of the CIA. He had been in place for just over a year.

“I knew two things. President Trump wanted to prevent Iran from getting a nuclear weapon – to push back the theocratic revolution of Iran’s efforts around the world. In order to deliver those outcomes for the president, we needed partners, not just the Mossad, but we needed the Mossad as well,” he said.

He recounted, “I talked to director Cohen. We built out an important [organizational] relationship. But the more important relationship was between he and I. There is always tension with these things [between intelligence organizations]. People want to take [compete over] credit. We made clear to our entire teams that we were partners together on behalf of president Trump and [prime minister] Netanyahu.”

The former CIA chief commented, “I could see he was a professional, career Mossad officer. I was not…. He had also spent time as Israel’s national security adviser…. We came from different backgrounds which complimented each other.”

In fact, the relationship was so close that Pompeo flew into Israel in late May just to attend Cohen’s retirement ceremony at the Mossad – and this despite the fact that Pompeo has had no official government capacity since January.

Pompeo and Cohen have another thing in common: religion plays an important role in both of their lives.
Pompeo is affiliated with the Evangelical Presbyterian Church, served as a local church deacon from 2007 to 2009 and taught Sunday school.

He has also at times invoked references to the Bible in public remarks.

Cohen grew up an Orthodox Jew and even met his wife in Orthodox youth groups. His children attended Orthodox schools, and he has helped build a local Orthodox synagogue near his home.

During the course of his career in the Mossad, much of which was overseas, he has not necessarily kept up with all of the strictures of Orthodox Jewish law, but remains very religiously committed.

Asked about this connection, while Pompeo wanted to focus on their professional ties first, he did offer that “I also knew he was a disciplined believer, which gave us a basis for which we could relate personally and could help to drive our organizations to excellence.”

This was especially true “whenever a moment came that one of our leaders asked for a particular piece of information for a particular operation – we would be in a world-class position to deliver that for them. I think we did that, and am confident that will continue, and I hope our successors build that out.”

In a recent interview with Yediot Aharonot, Pompeo also complimented Cohen for showing a readiness to share intelligence from the get-go of their relationship, as opposed to the standard intelligence industry transactional horse trading of information.

Asked about his comment in that interview, he replied, “I was speaking to, I want to be very clear, that director Cohen and I wanted to build a partnership, not a transactional relationship. It was not X for Y. You need to give us X so we will give you X.”

“We’ll do it because we are good partners. We won’t say X equals Y, and maybe throw in Z. It was about delivering, about our two democracies. For me: America first. For director Cohen, it was about his allegiance to the Israelis. We executed, and our two services together built out a capacity to let our leaders make good decisions and to execute,” he said.

The Post understands that Cohen also had excellent professional relations with Gina Haspel, who ran the CIA after Pompeo and worked in parallel to Cohen from May 2018 until January 2021.

In that case, why did only Pompeo attend the retirement ceremony and not Haspel?

Pompeo responded, “I talk with Gina all of the time. I don’t want to draw any conclusion from the fact that she was unable to attend.”

He added, “I wanted to be there for America. I am no longer in governmental office. I was there in my capacity as Mike. I wanted to be there. We had done good work. He was someone who would soon not be the director of the Mossad, but Yossi. I wanted to make sure that I thanked Yossi for the work that he did, to make America and Israel more safe.”
THERE ARE still some question marks about the timeline of the Pompeo and Cohen relationship.

In the Yediot report, the narrative was that Cohen visited in early 2017 with Pompeo at “the Farm,” where the clandestine agency trains its operatives.

Shortly after, Pompeo and his wife, Susan, then paid a reciprocal visit to Cohen and Mossad headquarters in Israel.
After this point, the timeline got a bit hairier.

For example, it is unclear whether Pompeo was given a tip-off from Cohen about the Mossad’s heist of Iran’s nuclear archive soon after the January 31, 2018, operation, at a Munich conference in February 2018 or during a trip by Cohen to Washington in March 2018.

The Post previously exclusively reported that Pompeo was blown away by the Mossad’s achievement during a March 2018 meeting with Cohen and has been told different versions of this part of the timeline.

In any event, Pompeo was Cohen’s go-to counterpart to give then-US president Donald Trump intelligence evidence that would encourage him to withdraw from the nuclear deal in May 2018.

POMPEO ALSO discussed the controversy about whether there was intelligence showing Islamic Revolutionary Guard Corp Quds Force chief Qasem Soleimani was coordinating imminent attacks on US targets at the time that the Trump administration assassinated him on January 3, 2020.

Critics of the strike, including some within the CIA who spoke to the media, have said there was no such special or imminent threat that would justify assassinating a high-ranking Iranian state official, as opposed to non-state terrorists.
Pompeo responded, “If they said there wasn’t [intelligence about imminent attacks], they didn’t see what I saw. There was clearly an effort by Iraqi terror forces and the Quds Force to kill Americans [being planned]. As he [Soleimani] was traveling from Beirut to Damascus to Baghdad, he was engaged in a project which, if fruitful, would lead to the death of Americans.”

With the internal debate in the US about the killing of Soleimani dating back to 2017, portions of the Trump administration wanted him removed from the board long before he was taken out on January 3, 2020.

However, when questioned about whether the Trump administration’s April 2019 declaration of the IRGC as a terrorist group was done partially to lay the legal groundwork for eliminating Soleimani, Pompeo shot down the idea, saying simply, “No, they were declared a terrorist group because they are terrorists.”

Whether one agrees or disagrees with Pompeo, he is always remarkably clear about his views – views that will be important to follow for a potential future US presidential candidate – and does not beat around the bush.

Post Views: 170
Previous As France Draws Down in the Sahel, How Will it Impact Regional Stability?
Next Six takeaways from Iran nuke negotiations – analysis