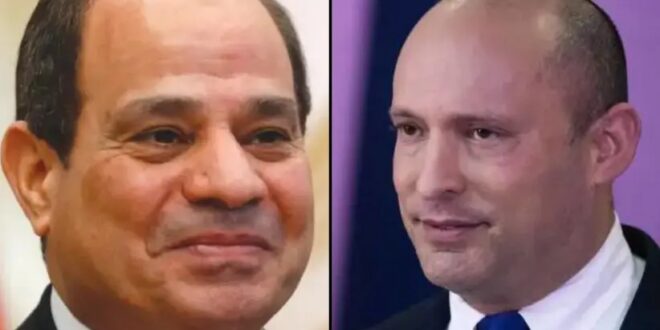 Leaders spoke in phone conversation about bilateral issues and affirmed the importance of the 1979 peace treaty to regional stability.

It was the first phone conversation between the two leaders, as efforts continue to consolidate a permanent ceasefire between Israel and Hamas.

Both Bennett and Sisi agreed to set up a face-to-face meeting as soon as possible.

Sisi emphasized the importance of a Gaza Strip ceasefire and the need to improve the civilian and humanitarian situation for the Palestinians living there, the Prime Minister’s Office said.

Bennett spoke of the importance of Hamas returning the remains of two soldiers killed in 2014 during Operation Protective Edge, Hadar Goldin and Oron Shaul, and the release of Avera Mengistu and Hisham al-Sayed.

The conversation took place hours after Israel allowed fuel for the Gaza power plant to enter the Gaza Strip for the first time since Operation Guardian of the Walls last month.

It is another sign that tensions between Israel and Hamas are easing.

Egypt and the United Nations are key brokers in efforts to achieve a permanent ceasefire. Last week, the status of talks to maintain calm between Israel and Hamas appeared fragile. But this week, the process appeared to be advancing.
Bennett and Sisi spoke of the bilateral issues between the two countries and affirmed the significance of the 1979 peace treaty between their countries to regional stability.

Bennett thanked Sisi for his role in maintaining that stability. An Israeli delegation is expected to go to Cairo this week to discuss Egypt’s continued efforts to broker the Gaza ceasefire, according to a report over the weekend in the London-based media outlet Al-Araby Al-Jadeed.

“Under the United Nations framework, the Qatari-funded fuel deliveries for the Gaza Power Plant will resume [Monday], as per the previous agreement between the United Nations Office for Project Services (UNOPS) and the State of Qatar,” he said in a tweet. “I welcome all steps taken to de-escalate the situation. [The] UN will continue to work with all concerned parties and partners to solidify a ceasefire and help the people of Gaza.”

“Good to meet with Qatar’s Deputy Prime Minister and Minister of Foreign Affairs @MBA_AlThani in Rome,” Blinken wrote on his Twitter page. “We discussed advancing regional security and stability, and building international support for humanitarian and development efforts in Gaza.”

Post Views: 202
Previous Bennett expected to meet Biden at White House in coming weeks
Next The wild world of the Mossad in Sudan – analysis