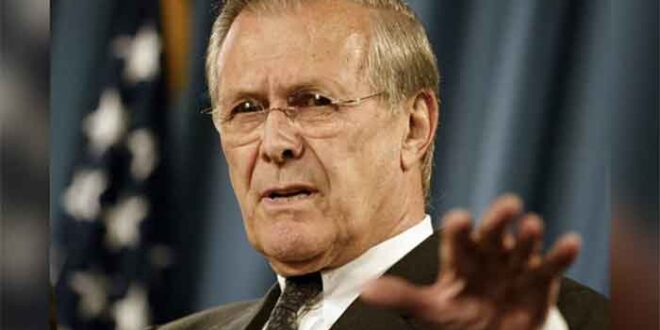 Former US defense secretary Donald Rumsfeld has died a few days back. The death-news pulls back the lie the US political leader uttered and sold forcefully around the world.

The propagation of the lie was so forceful that a lot of the audience went dumb. But, the lie went exposed, and the imperial power, its all-righteous and powerful media machine went exposed – credibility was lost once again.

Rumsfeld was 88 at the moment he left keeping behind his legacy of lies. None came forward to defend either the lie or the liar. That was an imperial lie from the mouth of an imperial liar.

Rumsfeld served as defense secretary under two US presidents – Gerald Ford and George W Bush. The US defense, essentially military, leader was one of the captains who led the Iraq and Afghanistan invasions by the US.

Peoples of those two lands, of Pakistan, and of the US know best, directly, the devastating force of those imperial aggressions. The US people also paid for the invasions. The body bags, the wounded veterans, the taxpayers’ money are the indicators of the payment made by the US people. Peoples of other countries know the consequences of those imperialist invasions through news reports and photographs, through a number of studies, and through leaks including the Wikileaks. All experiences, all reports, all leaks expose imperialism.

Rumsfeld Foundation, established by the US military leader, worked to promote “leadership and free political systems” in the US and abroad.

What type of free political system? The system that doesn’t make leaders accountable for lying to their own people, and to the world audience of the imperialist media? Is that political system free?

Similar lies are abound. The Libya-lie – topple Gaddafi, and the Syria-lie – fabricated story of toxic gas attack by Assad.

On Rumsfeld, Bush said: “All his life, he was […] big-hearted, and he treasured his family above all else.”

What about the devastated families in Iraq and Afghanistan? Years after the invasions, families there, hundreds and thousands, bear scar of the invasions – death of family members. Years after the invasions, families in those lands are struggling to pick up the pieces of life the imperialist wars have destroyed. What sin was committed by those families? Should there be no love, no concern, no pain for those families? Should there be none to treasure those families above all else? Or, is it that families of invaded countries bear no life, no consideration, no pain? Is it that families of those lands require no response to the devastation wrecked on them by invading soldiers unknown to the families? Perhaps, in some solitary moments, some soldier from the invading army sits quietly, and asks his conscience: Why those knocks on doors of homes at mid-nights, and why shooting those people unknown to me? What shall I answer if my son or daughter asks? The political system doesn’t care about these questions.

It has different interests – imperialist interests, which has no connection to human consideration, human feeling. The interests are a-human, but economic and political.

“The only thing tragic about the death of Donald Rumsfeld is that it didn’t occur in an Iraqi prison. Yet that was foreordained, considering how throughout his life inside the precincts of American national security, Rumsfeld escaped the consequences of decisions he made that ensured a violent, frightening end for hundreds of thousands of people.

“An actuarial table of the deaths for which Donald Rumsfeld is responsible is difficult to assemble. In part, that’s a consequence of his policy, as defense secretary from 2001 to 2006, not to compile or release body counts, a PR strategy learned after disclosing the tolls eroded support for the Vietnam War. As a final obliteration, we cannot know, let alone name, all the dead.”

It’s a tale of the political system carrying on invasions in land after land, year after year, and professing rights of all sorts, but forgetting its deeds demolishing rights.

The death-tale carries tricks of imperialist politics. The above mentioned story tells:

“Rumsfeld was hardly the only person in the Bush administration responsible for the Afghanistan war. But in December 2001, under attack in Kandahar, where it had retreated from the advance of US and Northern Alliance forces, the Taliban sought to broker a surrender — one acceptable to the US-installed Afghan leader Hamid Karzai. At the Pentagon, Donald Rumsfeld refused. ‘I do not think there will be a negotiated end to the situation, that’s unacceptable to the United States,’ he said. That statement reaped a 20-year war, making it fair to say that the subsequent deaths are on his head, even while acknowledging that Rumsfeld was hardly the only architect of the conflict.”

No reason to turn astonished with this part of the imperialist politics, a part of which is war. Now, after conceding defeat in the longest war, shall imperialist leaders, its economic interests, political scientists, accountants make a tally? What has been gained? What’s the cost-benefit ratio? What’s the cost-benefit ratio of the taxpayers, and of the war industry? Who paid and who gained? Does the economy demand such wars? Why such wars are needed? Can’t the economy survive without such wars?

All these questions are related to the economy looking and pushing for wars, fabricating logic for giving birth to wars.

But, is it sustainable – going to wars for keeping the economy propped up? A question economists, accountants, planners and politicians upholding imperialist interests may try to answer, if they like. Or, they may follow the famous ostrich policy. It’s their choice. But, people will look for an answer to the question, and the answer will lead them to reject theory, politics and economy of the system seeding wars, taking toll with human lives and livelihood.

Before that happens, Rumsfeld-lie will carry on its work, which it began years ago – taking away credibility of imperialist leaders and media. Since Iraq-lie, imperialist media’s credibility has eroded, as different polls show. It has eroded in imperialist countries. This is a major contribution the Rumsfeld-lie has made. Imperialism itself will despise such (in)efficiency of Rumsfeld. Today, none from the imperialism camp will come forward to defend the lie. Rather, all in the imperialist camp maintain silence on the issue as they find silence is their best shield when lies get exposed. It’s part of the warmonger’s legacy.

Post Views: 182
Previous Massive exercise in Black Sea with US comes after Russia warning
Next The Rumsfeld Rules