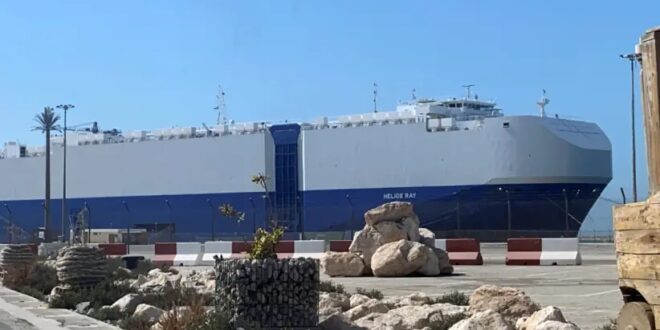 Formerly Israeli-owned ship damaged after being hit in Indian Ocean

Israeli security officials estimate that Iran is behind the attack on the vessel * No injuries have been reported as a result of the attack.

A cargo ship previously owned by an Israeli businessman was struck by an “unknown weapon” in the northern Indian Ocean, causing a fire to erupt onboard the vessel.

The report – which Al-Mayadeen states was based on “reliable sources” – claims that the “Israeli” ship was anchored in the port of Jeddah before moving towards the coast of the Emirates,” adding that “no one has claimed responsibility for this targeting so far.”

The source also mentioned a sabotage operation which was carried out last month against one of the buildings of Iran’s Atomic Energy Organization (IAEO) near Karaj, reportedly causing major damage.

N12 identified the ship as the Tyndall, a Liberian-flagged cargo ship. While the vessel was initially reported to be partly owned by Israeli businessman Eyal Ofer, Israeli sources later confirmed that the ship’s crew is not from Israel.

N12 said the Tyndall is owned by Zodiac Maritime Ltd. A source familiar with Zodiac Maritime’s fleet said the company had sold the CSAV Tyndall several months ago and that no such incident had taken place involving any of its vessels, they said.

Maariv later reported that the ship was sold two months ago, and was no longer under the ownership of the Ofer family, or any Israeli company.

Ship-tracking data from Refinitiv Eikon showed a vessel called the CSAV Tyndall that was last docked in Jeddah was off the coast of Dubai.

Israeli sources claimed that mentioning the attack on the IAEO means that the source was implying that the attack was a retaliation for the attack near Karaj.

Israel has been carrying out its “war-between-wars” against Iran for years, though it focused on weapons convoys from Iran to Hezbollah in Syria. But, according to foreign reports, Israel began to attack ships carrying Iranian oil and weapons through the Mediterranean starting in 2019.

Several Israeli and Iranian vessels have been damaged in the middle of the sea in the maritime war-between-wars between the two countries.

According to foreign reports Israel has hit tankers and ships transporting oil and weapons to Hezbollah. Several Israeli-owned vessels have also been struck in the Indian Ocean, and while there was damage, none sank.

On Friday IDF Chief of Staff Lt.-Gen. Aviv Kohavi hinted at an Israeli covert operation against Iran at the graduation of the IDF officers course at the Bahad 1 base.

Explaining that Israel is dealing with six arenas, including during the recent 11 days of conflict with the Gaza Strip, rocket fire from the North and “even an Iranian drone crossing into Israeli being thwarted.

“Anyone who tries to harm the State of Israel knows that any offensive enemy activity, near or far, will be answered with a significant, overt or covert response,” Kohavi warned. “This is how we have behaved in the past, and this is how we will behave in the future.”