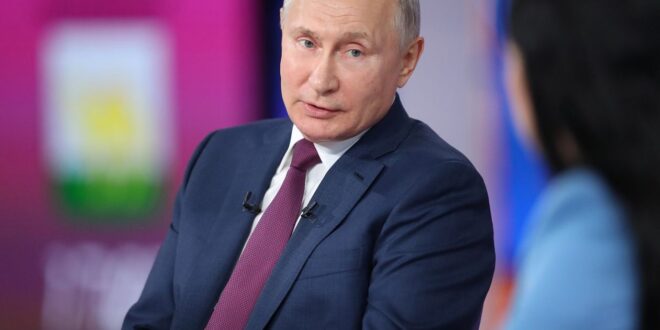 Russian president seeks to portray the U.S. as a waning power during an annual event at which he answers questions from ordinary citizens

Russian President Vladimir Putin challenged U.S. leadership in world affairs on Wednesday, arguing that an era of U.S. hegemony has come to an end as he touted Moscow’s growing military strength and increasingly assertive foreign policy.

Mr. Putin spoke during an annual event at which he answers questions from ordinary Russians. The remarks come two weeks after a summit with President Biden in Geneva where the two leaders sought to ease tensions but achieved little tangible progress. At the same time, Mr. Biden depicted the Kremlin leader as presiding over a country increasingly isolated by sanctions and struggling economically.

At Wednesday’s event, Mr. Putin pushed back, portraying the U.S. as a waning power.

“The world is changing dramatically,” he said. “On the one hand, our partners in the United States understand this, therefore there was a meeting in Geneva. On the other hand, they are trying at all costs to maintain their monopoly position.”

At their meeting earlier this month, Messrs. Biden and Putin acknowledged that relations between the U.S. and Russia have reached a post-Cold War low but both expressed hopes that the summit would allow for greater cooperation over time.

Following their talks, Mr. Biden said he wasn’t confident Mr. Putin would change his behavior without pressure from Western democracies.

The Russian president has denied allegations by the U.S. that Moscow was responsible for a series of cyberattacks against the U.S.

On Wednesday, Mr. Putin said that a British warship that entered the Black Sea waters near Crimea last week was a provocation carried out by the British and the Americans.

Russia has said its armed forces fired warning shots at a British destroyer that was violating what it considers its territorial waters near Crimea, the Ukrainian peninsula Russia annexed in 2014. The U.K. government has said that its ship was “innocently” passing through Ukrainian waters and that no shots were fired.

“It was a complex provocation,” Mr. Putin said Wednesday. “Even if we sank this ship, it would still be difficult to imagine that the world would be on the brink of a world war, because those who do this know that they cannot emerge victorious from this war.”

Asked about Mr. Putin’s allegations about U.S. involvement, White House press secretary Jen Psaki said, “I don’t have anything to detail or confirm for you from the podium.” She referred comment to the U.S. Defense Department.

Mr. Putin on Wednesday accused U.S. social-media platforms operating in Russia of ignoring authorities’ requests to delete illegal content, but stressed Moscow had no plans to block them. The Kremlin has intensified pressure on U.S. social-media companies in recent months to delete content supporting Russia’s political opposition ahead of parliamentary elections scheduled for September.

“As they are working in our country and making good money, they should comply with our laws. We aren’t asking anything extraordinary of them,” Mr. Putin said.

The Putin government has steadily silenced opposition voices in recent years, shutting or co-opting dissenting broadcasters and other media groups and outlawing the organization led by Russian dissident Alexei Navalny.

The annual call-in show offers Mr. Putin a chance to showcase his leadership and mastery of policy details. But the questions have increasingly turned to issues of poverty, inflation, and falling living standards—problems that have stirred increased popular resentment in recent years.

For more than three hours during the tightly choreographed event on Wednesday, Mr. Putin answered questions on everything from dilapidated schools to taxes on cattle and phone scammers, as well his stance on diets.

Mr. Putin urged Russians to get vaccinated, as a new wave caused by the more-transmissible Delta-variant has swept the country in recent weeks and cases have more than doubled. Vaccination rates in Russia have been low, and many regions this month introduced mandatory inoculation for workers in the service sector.

Mr. Putin, who said he was vaccinated earlier this year with the Russian homegrown Sputnik V vaccine, said that while he opposes compulsory vaccination, some regions had to introduce such measures to prevent a lockdown and avoid economic losses.