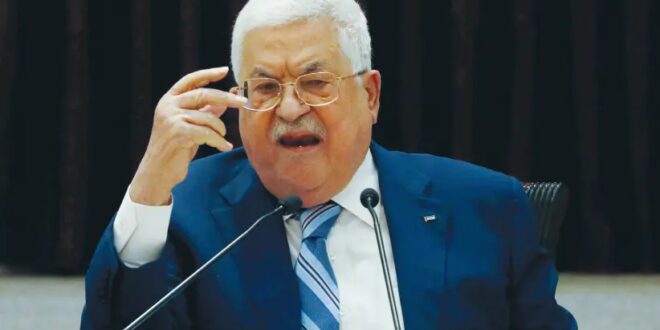 Palestinian Authority President Mahmoud Abbas on Monday called on Canada and the international community to “stop Israeli aggressions that violate international law.” He made the appeal during a meeting in Ramallah with Canadian Foreign Minister Marc Garneau.

Garneau’s visit to Ramallah came as Abbas continues to face widespread criticism over the death of anti-corruption activist Nizar Banat, who was reportedly beaten to death by PA security officers in Hebron on June 24.

In the past week, thousands of Palestinians have taken to the streets to demand Abbas’s removal from office. The protesters have also demanded that those responsible for the death of Banat be brought to justice.

The visit also comes amid a stepped-up crackdown by PA security forces on political activists, social media users and journalists in the West Bank.

The Representative Office of Canada in Ramallah last week said it was “deeply concerned by the attacks on Palestinians protesting the death of Nizar Banat, as well as the unacceptable attacks on journalists covering the protests.” It called on the PA to take immediate steps to ensure that freedoms of assembly and expression are respected and protected.

Abbas told Garneau that the Palestinians are prepared to return to the political process with Israel “to end the occupation and achieve comprehensive peace, in accordance with international resolutions, under the auspices of the Quartet” members – the US, Russia, the United Nations and the European Union.

Abbas stressed the importance of having a political horizon and giving hope to the Palestinians, according to the PA’s official news agency WAFA.

It said that Abbas emphasized the need to expedite the process of rebuilding the Gaza Strip and providing aid to the Palestinians.

Abbas told Garneau that the PA government in Ramallah is prepared to contribute to the reconstruction effort and work towards ending the division between the West Bank and the Hamas-ruled coastal enclave.

He also expressed appreciation for Canada’s support “for the right of the Palestinians to self-determination, its opposition to settlement expansion, its refusal to expel Palestinians from their homes in east Jerusalem, and its repeated calls for respecting the historical situation in religious sites,” WAFA added.

Abbas also thanked Canada for the humanitarian aid it provides to the Gaza Strip, the support provided to the United Nations Relief and Works Agency for Palestine Refugees (UNRWA), and its assistance in combating the coronavirus epidemic.

Abbas told his Canadian guest that he will call new general elections as soon as Israel agrees to allow a vote in Jerusalem.

In April, Abbas called off the parliamentary and presidential elections that were supposed to take place respectively on May 22 and July 31, under the pretext that Israel did not reply to the Palestinians’ request to hold the elections in Jerusalem.

WAFA quoted Garneau as saying that Canada was opposed to the “expulsion of Palestinian residents from their homes in east Jerusalem and the importance of respecting religious sites,” as well as its rejection of settlements.

Garneau also expressed Canada’s keenness to establish peace in the region, its commitment to achieving peace based on the principle of the two-state solution, establishing security and stability and continuing to provide relief and assistance to UNRWA, the agency said.

PA Foreign Minister Riyad Malki, who also met with Garneau, accused Israel of “waging war” on Palestinians in Jerusalem and Area C of the West Bank, which is exclusively controlled by Israel. Malki told the Canadian foreign minister that the international community must “protect the rights of the Palestinians, including the right to self-determination.”