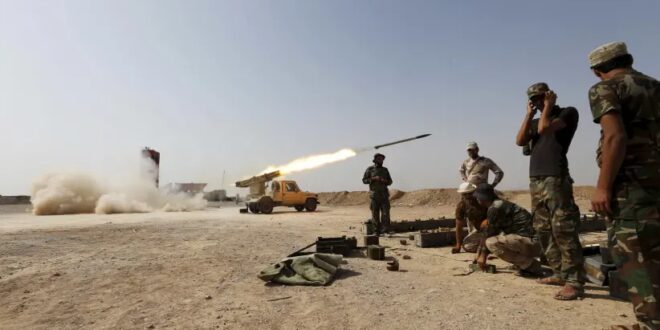 This is the third attack reported in the last two days; the other attacks have targeted US forces in Asad base and near the US embassy in Baghdad since July 4.

An attack on Erbil International Airport in the Kurdistan region of northern Iraq took place on Tuesday evening, reports said.

According to Rudaw, it was a rocket attack and comes a day after a drone attack was reported in Baghdad against US facilities near the US embassy. At least three drones targeted the Union III site near the embassy.

The US has forces at Erbil airport and the attack was said to have been carried out by numerous rockets. In attacks in late June and in April a drone targeted a CIA hangar.

Pro-Iranian militias have increasingly targeted US forces in Iraq, in attacks that take place weekly – and now appear to have taken place daily since July 4. This included the two attacks on July 5, one of which was on Asad base, and then those that unfolded the night of July 5 and now on the night of July 6 in Erbil.

US President Joe Biden ordered air strikes on pro-Iran militias in Syria in late June in response to the drone attack near Erbil that struck near a site for the US consulate. The militias vowed to respond and fired a salvo at US forces in Syria near Omar oil field.

It was rumored that another attack near Omar unfolded on July 4, which the US-led coalition denied. The Erbil attack would therefore be the third attack in 36 hours.

This is a major escalation by pro-Iran groups who seek to eject the US from Iraq. There have been around 50 attacks since the beginning of the year, increasingly involving drones.

The Kurdistan region is under threat from 122mm rockets based in Nineveh and has also been targeted by 107mm rockets smuggled closer to Erbil by militias. Drones have also been used because pro-Iran militias have difficulty penetrating the wall of security that the autonomous Kurdish region musters.

Iran now has America in its sights, however, and has apparently ordered its militias, likely via the Islamic Revolutionary Guard Corps, to begin a full-court press against the US. These militias include Kataib Hezbollah and Kataib Sayyid al-Shuhada.

The attack reportedly involved both rockets and missiles. Sources said at least 20 rockets and three drones were used.

This would make it the largest attack so far on US forces and on Erbil. Iran has used cruise missiles and drone combinations in the past, attacking Saudi Arabia’s Abqaiq oil refinery in 2019 with missiles and drones.

Footage in Erbil showed a fire and sirens as the attack unfolded. The airport was said to be closed due to the attack. Kataib Hezbollah had warned in recent days that it had rockets hidden underground it could use.

This major attack will force the Biden administration to consider retaliation. It is believed that pro-Iran militias have large stores of rockets and drones as well as ballistic missiles in Iraq and Syria.

The US Department of Defense downplayed the attack saying the report of 20 rockets and three drones was likely an exaggeration.

“We are aware of reporting of a UAS incident in the vicinity of Erbil, Iraq,” a Department of Defense spokesperson said. “At this time, initial reports indicate no structural damage, injuries or casualties.”