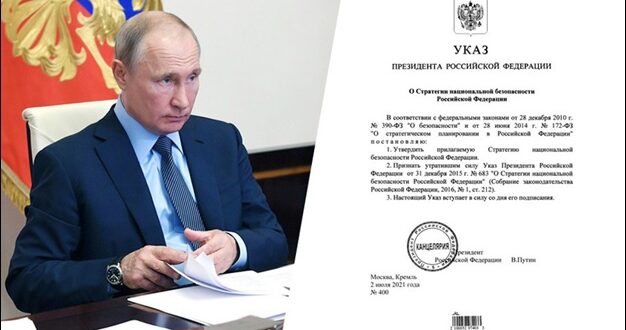 On July 2, 2021, Vladimir Putin approved Russia’s updated national security strategy, the previous version was authored in 2015. The national security strategy gives the appearance of a laundry list. It runs the gamut from military concerns to building internal consensus and defending Russia from pernicious Western ideas. The doctrine does not prioritize goals let alone spell out how they are to be achieved and the timetable for their realization. It therefore can be dismissed as a cross between a rehash of ideas recently articulated by the Russian leadership and a wish list. Nevertheless, the Russian press, in analyzing what is new in the doctrine, believes that it signals new policy directions and a broader conception of national security that places greater emphasis on soft power and competitiveness. The doctrine’s emphasis on cultural issues as a factor in national security also attracted media attention.

Kp.ru, notes that the overarching goal is to save the Russian people and this places first on the national interests list. The specific fight against the pandemic and the increased coronavirus mortality is clearly implicit in the wording. Five years ago, defense was the main national interest, but now it is only in second place – war remains a potential threat, but covid kills here and now.”

Another new emphasis that received separate treatment was the cybersecurity problem to which Russia like all developed states is vulnerable. As opposed to the American attempt to paint Russia as the chief culprit most cybercrimes originate from American territory.

Russia has been moving recently towards embracing a green agenda and now “the threat of global warming has been added to the strategy. The President has already spoken on this topic more than once – we will reduce carbon monoxide emissions. There is even a plan to overtake Europe in terms of environmental friendliness of the economy. But in parallel, the authorities are preparing for the worst scenarios: thawing permafrost and desertification of the southern agrarian regions.”[1]

Tass.ru, took notice of the stress on human capital in the document that posits: “Only a harmonious combination of strong power and human well-being will ensure the formation of a just society and Russia’s prosperity. “

Now ,the main factors of national security, observed TASS, are the quality of human capital, the ability to ensure technological leadership, the effectiveness of public administration and the transition of the economy to a new technological basis as stated in the document: “The state of science, innovation, industry, healthcare, education and culture is becoming a key indicator of Russia’s competitiveness.”[2]

In another comment, Tass.ru, notes the document’s emphasis on the need to push back against the assault on Russia in the soft power arena: “Information campaigns are being conducted aimed at forming a hostile image of Russia. The use of the Russian language and the work of Russian mass media are being curtailed. Access to Russian information resources is restricted. Sanctions are introduced against Russian athletes,”. Furthermore, Russia is “groundlessly accused of violating international obligations, engaging in cyber-attacks, and interfering in the internal affairs of foreign states.”.”[3]

Alexander Perendzhiev, an associate professor in the Department of Political Science and Sociology of the Plekhanov Russian University of Economics and in his other hat a member of the pro-government “Officers of Russia”, expert council applauds the new emphasis:

“There is an understanding in the approved National Security Strategy of Russia that “currently the main instruments of pressure and threats are not military force, but soft force, which is acquiring a threatening character. Soft power actions aim at fighting in the sphere of moral values. This is clearly indicated in the document. Having lost in the system of values, we are also losing the country…There is a constant vilification of the state and the Russian people. All this is an image struggle. The National Security Strategy raises the issue of enhancing Russia’s image. [Russia’s] image appears in the document as a factor of national security.”[4]

Kommersant highlights the realization that Russia must recapture her role as a leader in technological innovation. Economic growth requires state stimulation of ‘scientific, technological and innovative activity, attraction of private investments… and accelerated introduction of innovations into manufacturing.’ The state authorities believe that leadership in the sciences and technological development ‘has become one of the main factors in enhancing [of the country’s] competitiveness and national security.'”[5]

The defense of what the document calls traditional Russian spiritual and moral values and the length devoted to this area attracted attention. The national strategy doctrine specified these values as: “primarily, life, dignity, human rights and freedoms, patriotism, citizenship, service to the Fatherland and responsibility for its fate, high moral ideals, a strong family, creative work, the priority of the spiritual over the material, humanism, mercy, justice, collectivism, mutual assistance and mutual respect, historical memory and generational continuity, unity of Russia’s peoples of Russia. Traditional Russian spiritual and moral values ​​unite our multinational and multi-confessional country … “[6]

Political scientist Alexander Morozov lamented this emphasis and tied it to the reactionary course embraced by Putin since 2014 and the annexation of Crimea:

“Putin signed an updated version of the National Security Strategy. Paragraphs 84-93 are devoted to the protection of ‘traditional spiritual and moral values’. This is a grim innovation. It captures the turnabout that has taken place with Putinism since 2014. In the 2009 [national security] concept, such a description of ‘spiritual threats’ would have been impossible.”[7]

In contrast, the Russian nationalist and anti-Western Tsargrad.tv regarded the upgrading of culture as a factor in national security with enthusiasm. “An even larger bloc (four pages) talks about the protection of traditional spiritual and moral values, culture and historical memory. The propaganda of egoism, consumption and pleasure, attempts to inculcate alien ideals and values, and the ‘Westernization” of culture are marked as negative tendencies. It is openly stated that traditional Russian values ​​are being attacked by the United States and its allies, transnational corporations, NGOs, religious and extremist organizations. In fact, the Strategy unambiguously notes the perniciousness of globalization in its various (and especially cultural) forms of manifestation. It also talks about the need to strengthen the institution of the family, preserve traditional family values, cultural sovereignty and patriotic education, while emphasizing the importance of creating the necessary protection against external ideological and value expansion and pernicious information and psychological influences.[8]
Ria.ru noted the link in the document between the “Westernization” of culture and the Russian Federation’s loss of its cultural sovereignty with the threat to Russia’s cohesion.

Alexey Podberezkin, director of the Center for Military and Political Studies at MGIMO University, noted that the new strategy “for the first time mentions the system of national, moral and spiritual values.” This is a prelude to Russia reclaiming the ideological leadership once possessed by the Soviet Union “which is essential in the world,” that the document names as a priority. “This [the ideological leadership] is the resource which the Soviet Union once possessed, and which we subsequently forfeited voluntarily.”[10]

In the realm of foreign policy, the doctrine reaffirmed the tense relations between Russia and the US and Russia and Europe. Russia would therefore emphasize relations with the CIS [Congress of Independent States] member-states, Abkhazia, and South Ossetia [two regions that broke away from Georgia with Russian military backing] as one of the main areas of its foreign policy.

Outside the CIS, Russia will intensify cooperation with China, India, countries of the Asia-Pacific, Latin America, and Africa, as well as “improve brotherly ties between the Russian, Ukrainian, and Belarusian peoples.”[11] The last phrase is double edged. Putin has stated that he does not regard the Ukrainians as a separate people and Russia is pushing to integrate Belarus into Russia.

Blurring The Distinction Between Dissidents And Subversives.

The document devotes a great deal of attention to the issue of subversion and the need to keep a tight leash on sources of information. Foreign intelligence services, the document warns, remain active in Russia, and use Russian NGOs and individual Russian citizens to advance their purposes:

“Detrimental forces within the country and foreign states manipulate the information domain in an attempt to use genuine social and economic difficulties in Russia to incite negative social processes, exacerbate inter-ethnic and inter-confessional conflicts. The intelligence-gathering and other activities of special services and organizations of foreign states, also include those carried out through controlled Russian public organizations and certain individuals.”

The authors of the strategy also claim that international terrorist and extremist organizations are enhancing their efforts to recruit Russians, create secret cells in the country and involve youth in illegal activities. “The capabilities of global Internet companies are widely exploited to propagate false information and organize illegal public rallies.”[12]

Post Views: 164
Previous Russian Expert Plotnikov: Russia No Longer Is The Only Player In The Trans Caucasus, Turkey’s Influence Is Comparable
Next Duterte’s Ingratiating Approach to China Has Been a Bust