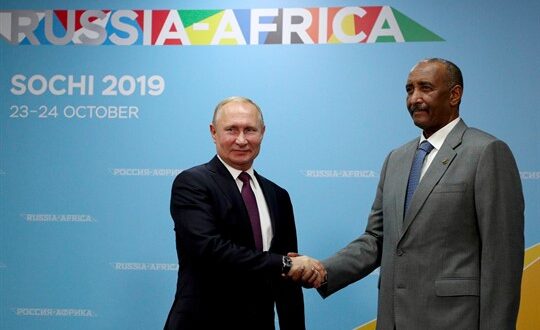 Following Russian Prime Minister Mikhail Mishustin’s approval last month of a new naval base to be built on Sudan’s Red Sea coast, official Kremlin statements have billed the facility as a logistics center that will be defensive in nature—for principal use as a resupply station for Russian warships. In spite of these assurances, Russian media outlets have touted the base as Moscow’s gateway to the Red Sea and Indian Ocean, widening the reach of its naval forces. The basing agreement’s terms, which were released on Dec. 8, appear to support this latter view: In exchange for military aid, Sudan will allow Russia to maintain its facility in Port Sudan for at least 25 years, allowing it to bolster its influence in key maritime theaters.

The new naval base is the culmination of decades of close relations between Moscow and Khartoum. The former dictator Omar al-Bashir, who ruled Sudan for almost three decades after ousting Prime Minister Sadiq al-Mahdi in a 1989 coup, gradually cultivated deeper ties with Russia. Even though Russia supported the 2005 United Nations embargo on arms exports to the parties in the brutal civil war in Darfur, Moscow shipped T-72 battle tanks, grenade launchers and small arms to Sudan in 2008. At a November 2017 meeting with Russian President Vladimir Putin, Bashir accused the United States of supporting rebel forces in Darfur and urged Russia to protect Sudan from supposed American aggression, claiming Sudan could be Russia’s “key to Africa.” This meeting resulted in preliminary negotiations on the construction of a Russian naval base in Sudan.

Post Views: 252
Previous How Will France’s Growing Naval Presence in Asia Affect Its China Ties?
Next What’s Behind the Resurgence in Piracy Off Somalia’s Coast