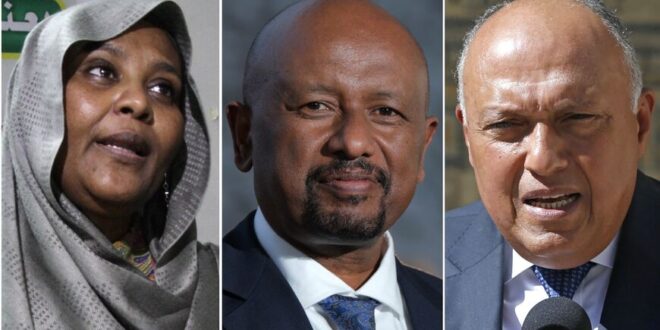 The three countries discussed Ethiopia’s mega-dam at a UN Security Council meeting; significant disagreements remain between the three parties as Ethiopia fills the dam for the second year in a row.

The UN Security Council session on Ethiopia’s Nile River dam got heated Thursday as Egypt and Sudan voiced serious disagreements with Addis Ababa on the issue.

Egyptian Foreign Minister Sameh Shoukry called the Grand Ethiopian Renaissance Dam a “colossal wall of iron and steel that casts a long and dark shadow over the people and fate of Egypt” during the three-hour session.

Ethiopia started building the massive dam on the Blue Nile in 2011 and started filling it last year. The total filling process will take several years to complete. Ethiopia plans to use the dam to provide electricity to its growing population of more than 100 million. For years, Egypt and Sudan have expressed concerns that unilaterally filling the dam sans an agreement could dangerously lower the river’s water levels in their territories. The Nile is a major source of water for drinking, agriculture and other needs in the region.

On Monday, Ethiopia informed Egypt and Sudan that the second round of filling had begun. The filling occurs in the summer during East Africa’s rainy season.

African Union-mediated negotiations have failed to produce an agreement on the dam issue. Egypt and Sudan urged the Security Council to deliberate on the matter, as they did last year before the first filling. Ahead of Thursday’s session, Tunisia proposed a resolution whereby Ethiopia would stop filling the dam and the three countries would finalize a binding deal within six months. It also called for the trio to “refrain from making any statements, or taking any action that may jeopardize the negotiation process.”

The Security Council member states uniformly voiced support for the African Union’s negotiations and called on all the involved countries to show restraint at the start of Thursday’s session. Russia also proposed that Ethiopia, Egypt and Sudan hold talks while their officials are all in New York for the UN session.

Shoukry, the first of the three countries’ representatives to speak, launched into a 30-minute speech that included harsh criticism of Ethiopia. He called the unilateral filling of the dam — also known by its initials, GERD — an “existential threat” and criticized Ethiopia for starting the second-year filling so close to the Security Council session’s date.

“Days within this session, the Rubicon was crossed,” said Shoukry.

The diplomat accused Ethiopia of showing “irresponsibility and callous indifference on what the filling could inflict on Egypt and Sudan,” adding that the “downstream nations are left vulnerable to the evils of the GERD.”

Shoukry did not threaten war, but said “Egypt will be left with no alternative to protect its right” if there is no agreement. Later in his address, he called for “brotherhood” and spoke friendlier of Ethiopia.

“Egypt is committed to Ethiopia’s prosperity and stability,” he said.

He also praised the European Union’s Thursday statement on the dam, which also called for the countries to refrain from unilateral actions.

Shoukry concluded by asking the UN to support the African Union negotiations and enable international partners, including the UN, to help further the talks.

Sudan has expressed a similar position to Egypt’s on the dam in recent years, and Foreign Minister Mariam al-Mahdi continued that trend in New York on Thursday. She said the dam issue threatens Sudan’s future as an emerging democracy.

“Attempts by Ethiopia to impose hegemony in a unilateral manner to fill the dam are extremely serious and threaten to undermine the progress and promising future that is beginning to appear on the horizon in Sudan,” said Mahdi.

She also criticized Ethiopia for resuming filling so close to the UN session.

Mahdi concluded by calling on the Security Council to support the resumption of African Union negotiations, allow international mediators in the dispute and urge Ethiopia to take no more unilateral actions on the dam.

Ethiopia was represented by Water Minister Seleshi Bekele at the session. Bekele echoed Shoukry’s language that the filling of the dam is a matter of life or death, but in this case in reference to Ethiopia’s large and youthful population.

“Catering to the needs of this growing population is imperative and an existential matter for my country,” said Bekele.

He said the two downstream countries oppose any Ethiopian use of the Nile. “Their objection is not to the GERD, but rather to stop any water use by Ethiopia,” he said.

The minister also criticized Sudan for not attending a June meeting on the dam.

He also called filling of the dam inevitable, since water will enter it during the rainy season.

“The filling of the dam is pure physics,” said Bekele.

Bekele also likened the dam to Egypt’s Aswan Dam, on the Nile at a point after the Blue Nile and White Nile merge in Sudan.

He concluded by saying the UN Security Council is not an appropriate forum for discussion of a water issue, since the council is designed to focus on security matters.

“(A resolution) can only come through good faith negotiations,” said Bekele.

The tone and content of the meeting was similar to the first Security Council session on the dam in June 2020. During that event, Ethiopia also said the venue was inappropriate and Egypt called the issue “existential.”