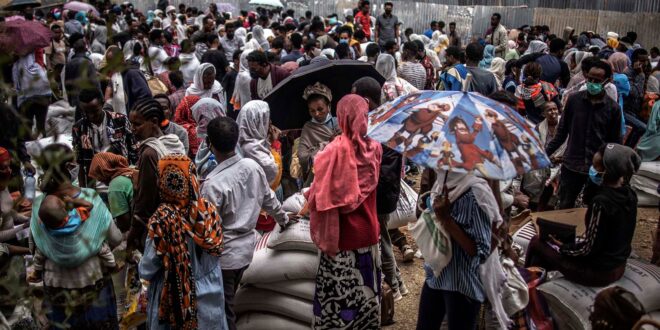 Five Steps to Sustain a Cease-Fire in Northern Ethiopia

The U.S. and others can help strengthen a truce—and avert a famine—in Tigray.

After months of war and amid an intensifying humanitarian crisis in Ethiopia’s northern region of Tigray, the Ethiopian government unilaterally declared a “humanitarian cease-fire” on June 28. If Ethiopia wants this truce to end the war it needs to persuade Tigrayan forces, which have so far vowed to keep fighting, to agree to a deal. As a prelude to wider negotiations, the odds of ending the conflict would improve if confidence building measures are urgently undertaken and five key areas of a truce expanded. U.S. and international partners can promote these steps while recognizing that Ethiopians must own any cease-fire process.

Many unilateral attempts to cease hostilities have quickly foundered, particularly when the party declaring the truce has suffered a military setback. In Ethiopia, suspicion toward the other side and a lack of confidence may be deepened by the actions of the federal government, its allies and Tigrayan forces in the coming days. If the government intends merely to shift from a blunt counter-insurgency campaign to a containment strategy — one that effectively blockades Tigray while providing time for federal forces to reorganize and rearm — then this truce is unlikely to lead to a lasting peace. The withdrawal of ground forces does not change the federal military’s air superiority, nor confirm that damaging airstrikes will be halted. For their part, if the Tigrayan People’s Liberation Front (TPLF) and its allied Tigray Defense Forces (TDF) see the government’s truce as only an opportunity to conduct further military offensives, then violence will also continue.

Therefore, if the federal government wants a truce to last, and for Tigrayan and other forces to accede to a deal, the following steps are urgent:

Truces that do not explicitly bind all parties to a conflict usually fail. In the Tigray war, the Ethiopian military has fought alongside forces from the Amhara region of Ethiopia, to the south of Tigray, as well as from the neighboring country of Eritrea, to the north of Tigray. While reports say Eritrean forces have withdrawn from some areas, it is unclear whether they intend to honor this truce. Little suggests that Amhara state forces intend to withdraw from the areas of Tigray they now occupy, and they also have not made clear whether they feel bound by the federal government’s truce.

Given uncertainty about the intentions of their adversaries, and with their recent successes in recapturing territory, it is unsurprising that the Tigrayan (TPLF/TDF) forces are presently unwilling to commit to a truce. Since these forces have defined their military objective as “degrad[ing] enemy fighting capabilities,” and, in their view, this has yet to be achieved, violence may well continue. Further, a federal spokesman has threatened to retake Mekelle, Tigray’s capital, “in less than three weeks … if it is required.” For the party that offered the truce to openly declare readiness to renounce it so quickly will not help persuade Tigrayan forces to lay down their weapons.

The key question is what else might convince the TPLF/TDF to shift their posture. International pressure is mounting on the Tigrayans to sign up to the truce. Yet if they do so mainly to assuage international concerns, rather than out of any genuine desire to end the conflict, this may ultimately be counterproductive. U.S. and other international partners can do more than simply apply pressure. They can suggest parameters for a more viable truce, including credible monitoring provisions and security guarantees by outside parties. They could also work with the Ethiopian parties to accelerate measures to normalize daily life.

The acting assistant secretary of state for Africa, Robert Godec, voiced U.S. hopes that this temporary truce will become permanent. For this to happen, the geographic and temporal scope of even a temporary truce needs to be negotiated and defined. With regard to geography, the government’s declaration suggests that a “pause in military activities” applies to all of Tigray. However, given that forces from neighboring Amhara state now control areas of western Tigray, it cannot be assumed to which territory a truce applies unless it is explicitly defined (usually, by way of a map). Further, the legacy of the 1998-2000 Ethiopia-Eritrea war complicates matters. Border areas were the focus of that war, and eventually led to the town of Badme and nearby areas being awarded to Eritrea by an international commission. For more than 15 years, the TPLF, which then governed Ethiopia, rejected the commission’s ruling. Soon after coming to power, the Abiy government recognized the Eritrean territorial claim, contributing to Abiy receiving the Nobel Peace Prize. Eritrean forces will almost certainly not withdraw from these areas now, even as Tigrayan forces maintain their claim and aspire to undo the Abiy government’s decision. Some form of demilitarization of these contested areas along the border may be needed to avoid clashes.

Although the government’s statement suggested that the truce would continue for the duration of the planting season, it has no specific end date. Truces with vague timeframes create additional uncertainty. Instead, a more substantive truce could suggest a roadmap toward a more permanent arrangement, by, for example, outlining a sequence for the withdrawal of forces, which may need to occur over a matter of weeks.

All parties to a conflict have obligations to protect civilians and comply with the laws of war. Since violations of these laws and apparent atrocities have been committed by all sides, a good truce agreement could itemize what activities are permissible, building on the basic international obligations but also making further assurances to demonstrate a commitment to peace. For example, the December 2000 Algiers Agreement required Ethiopia and Eritrea to, among other provisions, “refrain from the threat or use of force against the other … without delay, release and repatriate all prisoners of war…[and]…without delay, release and repatriate or return to their last place of residence all other persons detained as a result of the armed conflict.” Tigrayan forces reportedly have taken thousands of prisoners of war; it is unclear whether the federal government or its allies also hold such prisoners.

Additionally, the Algiers Agreement saw the parties commit to an investigation of the key incidents that led to the 1998-2000 conflict. In the current case, similar investigations may also be important. Further, it would be productive for all parties to identify tangible steps to improve humanitarian access and delivery (for example, a commitment to return confiscated or looted humanitarian equipment, or provide compensation). Since access to Tigray depends on traversing either other Ethiopian state boundaries or international borders, the federal government could offer assurances that direct land access to the region for humanitarian deliveries will be maintained and enhanced. Reportedly, and after the truce was declared, river crossings between Tigray and Amhara were destroyed, which undermines the ostensibly humanitarian imperative of the truce. Such links need to be urgently restored.

To improve trust between belligerents, many cease-fire arrangements require conflict parties to declare any intended military movements and resupply activities, commit to demilitarize certain areas and disclose the status of certain military assets and their locations. Contemplating a combination of such measures might help detail a broader truce and provide greater certainty to the parties as to the others’ intentions.

In most modern wars, more people die because of hunger and disease rather than as a direct consequence of combat. Tigray is no exception, and it may already be too late for thousands on the brink of starvation. Even if humanitarian access improves rapidly, it will take time for food security to be restored. In the meantime, action could be taken to normalize other aspects of daily life for ordinary people. International aid agencies have called for the restoration of electricity, communications and transport links to the region to aid the humanitarian effort. Some Ethiopians are concerned about the safety of non-Tigrayan students at the University of Mekelle. The Tigrayan administration could offer explicit assurances that non-combatant civilians such as these will be safeguarded, regardless of their ethnicity, and that Tigrayan forces will be held accountable for any violations of human rights.

Although international actors found little traction in their earlier attempts to end the crisis, the government’s truce provides a window for the renewed involvement of third parties. In an environment of considerable mistrust, third parties could play an invaluable role. For example, in the coming days, third parties could help verify the withdrawal of troops. In the longer term, and with a view to broadening participation in a cease-fire arrangement, the role of third-party monitoring — possibly under the auspices of the region, the United Nations, or a hybrid of the two — could be essential. While cease-fire monitoring is no panacea, credible monitoring can help a truce endure. It can provide a path towards accountability when violations do occur, as well as set the stage for future negotiations.

The international community has called for a cease-fire for months, but most of those calls lacked specificity. Now, with the Ethiopian government’s tentative truce, there is an opportunity to make a cease-fire work in practice and, hopefully, endure. Although a wider, comprehensive process of dialogue and negotiation is still needed throughout Ethiopia to address fundamental causes of conflict and grievance, a better truce in Tigray could help ensure violence subsides and the humanitarian situation stabilizes, before more lives are lost.