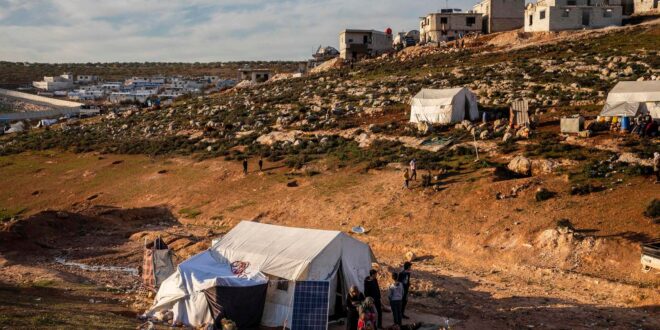 With Syria’s Last Aid Crossing on the Line, Can U.S., Russia Make a Deal?

The upcoming U.N. border crossing vote comes at a time of significant humanitarian suffering across Syria.

A crucial deadline that will determine the future of humanitarian aid to Syria looms this week, as the authorization for the Bab al-Hawa crossing on the Turkey-Syria border expires on July 10. The crossing is the last with a U.N. mandate allowing aid to be delivered directly, without having to first go through the Assad regime in Damascus. While Washington has been insistent that the crossing should remain open, with a senior official calling it a matter of “life and death,” Moscow has said the cross-border aid undermines Syria’s sovereignty. Russia has used its veto power in the Security Council to prevent extensions of three other such aid crossings.

USIP’s Mona Yacoubian explains why the stakes are so high, particularly for the millions in northwest Syria in dire need of aid; why Russia wants the crossing closed and others want to it remain open; and assesses whether Washington and Moscow can come to a deal to keep it open.
Why are the stakes so high for the upcoming vote to reauthorize the Bab al-Hawa crossing? How would you assess the humanitarian conditions in northwest Syria?

The Bab al-Hawa crossing is a lifeline for millions of Syrian civilians. Failure to renew its authorization would precipitate a humanitarian catastrophe. Unfortunately, the Syrian regime’s weaponizing of humanitarian access is nothing new, but the situation in the northwest is particularly perilous. An estimated 3.5 to 4 million civilians currently inhabit northwest Syria. This population is considered particularly vulnerable, as many have been displaced multiple times over the course of the conflict. The United Nations estimates that more than 70 percent of the region’s population depends on lifesaving assistance including food, water and medical supplies as well as pandemic-related assistance. One thousand trucks cross into Syria through Bab al-Hawa each month, providing food baskets to 1.4 million civilians as well as water, medical assistance and education supplies among other items. At a time of record food insecurity across Syria, vulnerabilities are high in northwest Syria where 3 in 10 children under age 5 suffer from stunting and acute malnutrition is rising.

Unfortunately, there is no viable alternative to the current cross-border architecture. No “plan B” exists that could match both the scale and complexity of the U.N. operation working through Bab al-Hawa given the significant level of humanitarian need in northwest Syria. Local and international NGOs do not have the capacity or resources to scale up sufficiently or to address the inherent complexities of flowing humanitarian assistance into a volatile, dangerous conflict zone. The United Nations is able to pre-position some additional supplies, but pre-positioning serves as an immediate patch, not a long-term solution.

The upcoming U.N. border crossing vote also comes at a time of significant humanitarian suffering across Syria. After more than 10 years of conflict, a cruel paradox has set in: while the level of violence and hostilities is at an all-time low, humanitarian suffering has reached record levels. Syria is in the midst of an economic collapse driven by years of conflict, corrupt mismanagement by the Assad regime, financial meltdown in neighboring Lebanon, multiple layers of international sanctions and the economic impact of the COVID-19 pandemic. The collapse of the Syrian pound has triggered triple digit inflation for certain food items as well as widespread shortages of fuel and food. Poverty rates are mounting and those in need of assistance jumped by 20 percent since last year. Some in the humanitarian community suggest that the economic collapse is now the greatest driver of displacement.
Why does Russia want the crossing closed? Why do other regional actors, notably Turkey, want to see the crossing remain open?

Russia wants Bab al-Hawa closed because it considers the U.N. border crossing to be a violation of Syrian sovereignty. Rather than providing humanitarian assistance cross-border, necessarily bypassing Damascus, Russia is demanding that humanitarian assistance pass through Damascus in recognition of its sovereignty. Russia has doubled down on this argument following the May 26 presidential election in Syria. While many countries including the United States and its European allies called the election out as a sham, Russia has cited the election as evidence of Assad’s legitimacy and demands the regime’s acceptance by the international community.

In addition, Russia claims the cross-border architecture is no longer needed and that assistance needs can be fulfilled cross-line (meaning across lines of conflict). However, delivering assistance cross-line in Syria is fraught with numerous challenges. The Assad regime has long instrumentalized and coopted assistance, rewarding areas that are loyal while punishing former opposition held areas. It uses assistance to reward its cronies by insisting that international aid organizations work through local, mukhabarat-vetted partners. In the past, regime operatives have interfered with assistance convoys, “inspecting” trucks and pulling off lifesaving medical kits. Unfortunately, the Assad regime has not respected the foundational principles of humanitarian assistance based on the impartial provision of aid based solely on need.

Turkey would like the border crossing to remain open because of the likelihood that closing the crossing would precipitate a humanitarian catastrophe. Failure to provide adequate assistance into the northwest could trigger massive displacement of desperate civilians either to Turkish-controlled areas in northern Syria or to Turkey itself. A scenario of renewed displacement would undermine one of Ankara’s primary national security imperatives driving its intervention: stopping the flow of additional refugees.
Can the United States and Russia come to a deal to help ameliorate the humanitarian suffering? What would that look like?

Despite ongoing bilateral tensions, a U.S.-Russian deal on extending the U.N. border crossing is possible. Such a deal would be framed by humanitarian issues and focused primarily on expanding humanitarian access, both cross-border and cross-line. In essence, the deal would seek to address each side’s concerns over the delivery of humanitarian assistance by ensuring both cross-border and cross-line access. In exchange for a Russian decision not to veto the Bab al-Hawa crossing, the United States would support greater cross-line access from Damascus as well. In a hint that such a deal could occur, U.S. officials have publicly underscored that the “United States supports all forms of assistance for the Syrian people — we want to make this clear — including cross-line assistance from Damascus.”

An “access for access” deal would be a win-win-win-win solution. Most importantly, it would be a win for everyday Syrians suffering under difficult economic circumstances by maintaining if not expanding humanitarian access. It would be a win for the United States which has underscored that maintaining the crossing is a top priority for the Biden administration and its Syria policy. It would be a win for Turkey, which does not want to see U.N. assistance to the northwest dry up for fear of renewed pressure of Syrian refugee flows. Finally, it would be a win for Russia which has insisted on the importance of cross-line assistance as a reflection of their demands for respect for Syrian sovereignty. Moreover, despite Russian bluster on closing Bab al-Hawa, Moscow may seek an alternative to vetoing the measure for fear of angering Turkey and disrupting its prickly partnership with Ankara in northern Syria.

U.S. officials have emphasized that Russian action on Bab al-Hawa will make or break prospects for future U.S.-Russian cooperation in Syria. While agreement to maintain the Bab al-Hawa crossing is far from assured, a U.S.-Russian deal could potentially unlock other areas for cooperation in Syria, including consolidating the de facto cease-fire on the ground and further enhancing humanitarian access. As the conflict settles into a protracted stalemate and humanitarian conditions deteriorate, additional space for compromise among external stakeholders including the United States and Russia could become apparent. By contrast, if Russia fulfills its threat to veto, prospects for U.S-Russian cooperation in Syria will all but evaporate.