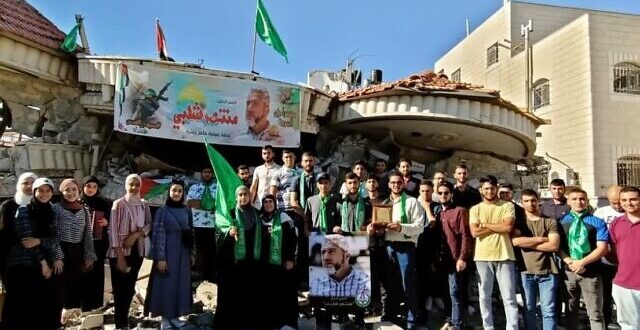 The IDF said it arrested dozens of Hamas activists Wednesday after they paid a solidarity visit to the West Bank village of a Palestinian man accused of killing an Israeli student.

In a joint operation with Border Police and the Shin Bet security service, Israeli security forces raided two buses full of Palestinian university students as they were making their way out of Turmus Ayya. The students taken into custody had visited the home of Montasir Shalabi, which the IDF demolished last week as part of its controversial policy aimed at deterring future attacks.

The suspects were part of Hamas’s student faction at Birzeit University, the IDF said in a statement, adding that “some of the arrested activists were directly involved in terrorist activities, which included money transfers, incitement and the organization of Hamas activities in the West Bank.”

The IDF did not specify how many suspects it had detained, but Hebrew media said that roughly half of the 60 students on board the buses had been brought in for questioning.

An invitation for Wednesday’s student event posted on social media read, “The Hamas student faction at Birzeit University invites you to attend a visit to the family of the heroic prisoner Montasir Shalabi, who carried out the heroic [attack] at the [Tapuah Junction].”

Shalabi has been charged with killing Yehuda Guetta, 19, at the Tapuah Junction in the northern West Bank on May 2. The shooting attack also injured two other Israeli teenagers, one of them seriously.

The 44-year-old is suspected of driving to the northern West Bank’s Tapuah Junction and opening fire at the group of Israeli students from a yeshiva in the nearby Itamar settlement.

The father of seven was eventually arrested following a three-day manhunt, an hour after Guetta succumbed to his injuries.

Shalabi is a dual US-Palestinian citizen, and senior US officials reached out to their Israeli counterparts imploring them not to move forward with the demolition of his home on the grounds that the alleged attacker’s family should not have to pay for the actions of their father and husband. But the IDF went forward with the razing, angering the Biden administration, which vowed to continue voicing its objections over the matter.

The Axios news site reported Wednesday that the move led House Foreign Affairs Committee chairman Gregory Meeks to phone Foreign Minister Yair Lapid, chastising Jerusalem for the demolition, which took place while the US lawmaker was in Israel leading a congressional delegation.