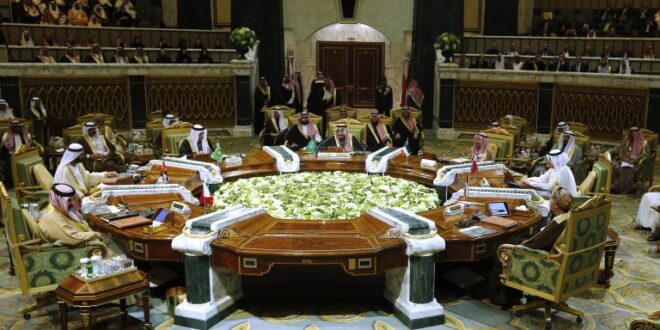 Forty years after the founding of the Gulf Cooperation Council, the six monarchies that constitute the grouping are more divided than ever on key issues.

The leaders of the Gulf Cooperation Council differ over how to counter the threat from Iran—the same threat that prompted the GCC’s initial formation.

U.S. defense cooperation with GCC states is critical to U.S. policy in light of the American withdrawal from Afghanistan and Iran’s expanding capabilities.

The Gulf states continue to struggle with dependence on hydrocarbons exports, COVID-19, climate change, and overtures by U.S. competitors Russia and China.

In response to the outbreak of the Iran-Iraq War in September 1980, the Gulf Cooperation Council (GCC) was formally constituted in May 1981 by six Arab monarchies in the Persian Gulf: Saudi Arabia, Kuwait, the United Arab Emirates (UAE), Qatar, Bahrain, and Oman. The alliance—whose agreements have traditionally focused on either security or economic cooperation—was forged primarily to help Iraq battle revolutionary Iran, an avowed adversary that sought to “export” its Islamic revolution to the Gulf and other Arab states. Forty years since its inception, the GCC remains focused on the multi-pronged threat from Iran, but intra-GCC divisions over how best to counter that threat—along with other issues—have widened in recent years. Three GCC states—Saudi Arabia, the UAE, and Bahrain—believe that the United States must maintain sanctions pressure on Iran and question the Biden administration’s intent to rejoin the 2015 multilateral Iran nuclear deal exited by former U.S. President Donald Trump in 2018. Because they doubt the resolve of the Biden administration to counter Iran’s regional influence, Saudi Arabia and the UAE have recently engaged in their own talks with Tehran to lower tensions. In particular, the two Gulf states have sought to enlist Iran’s cooperation in ending the Yemen conflict, where their campaign against the Iran-backed Houthis has recently stalled.

Three of the GCC states—Kuwait, Qatar, and Oman—have consistently engaged with Iran, asserting that dialogue is preferable to confrontation, and consequently back the Biden administration’s decision to try to reenter the 2015 Iran nuclear accord. Despite their differences on Iran, all six GCC states maintain extensive defense ties to the United States, including hosting U.S. forces and equipment at some of their military facilities. This access and cooperation are pivotal to U.S. efforts not only to deter Iranian aggression, but also to combat terrorist groups in Afghanistan and elsewhere in the region following the completion in August of the withdrawal from the country.

Because defense cooperation with the GCC countries is a pillar of U.S. military and foreign policy strategies in the region, U.S. officials remain concerned about unresolved strains among the Gulf states. The intra-GCC rift between Qatar and Saudi Arabia, the UAE, and Bahrain has not been fully resolved despite the January 2021 Al Ula agreement to end the four-year blockade against Qatar. In June, Saudi Arabia reinstated its ambassador to Doha, but the UAE and Bahrain have not followed suit. Bahrain has not yet resumed trade and travel links with Qatar, and June-July efforts by the two states to convene talks to resolve their bilateral issues have foundered. U.S. officials also have concerns about still modest, but growing, security ties between the Gulf states and U.S. competitors Russia and China. In order to amass the advanced systems needed to counter Iranian threats, the UAE has been acquiring armed drones from China, and several Gulf states are considering buying the sophisticated S-400 air defense system from Russia. U.S. officials have sought UAE pledges to limit its defense ties to China as a condition to proceed with the sale of the sophisticated F-35 combat aircraft to the UAE. In late 2020, Bahrain and the UAE normalized relations with Israel, and while the other GCC states have not joined that effort (known as the “Abraham Accords”), the move has not necessarily added to intra-GCC strains, as all GCC member countries maintain some ties to Israel.

In early July, new intra-GCC strains emerged, this time between Saudi Arabia and the UAE, historically the two closest Gulf allies. Disagreement between the two states on oil production strategy scuttled an effort by major oil producers (so-called “OPEC+”) to set new production targets. The oil policy schism reflects broader challenges facing the Gulf states beyond longstanding security threats. The UAE seeks to reinvest near-term oil revenues in renewable energy technology and other economic diversification initiatives. Saudi Arabia, and to a lesser extent Kuwait, want to preserve the global market for crude oil by keeping current oil prices relatively stable. The longer-term threat to Gulf crude oil exports is, in part, a function of growing global attention to combatting climate change—a trend that is itself making the Gulf states increasingly difficult to inhabit in the summer months. At the same time, the COVID-19 pandemic continues to disrupt the economies of some Gulf states, particularly those of Bahrain and the UAE, which have up until recently relied on relatively ineffective Chinese-made vaccines to inoculate their populations. There are no instantly available solutions to virtually any of the security, economic, health, or other threats to the Gulf states, and the unity the six countries need to face these challenges remains elusive.

Post Views: 266
Previous Russia Increasing its Security Footprint Throughout Central Africa
Next Protests Roil Havana as Cubans Push Back Against the Regime