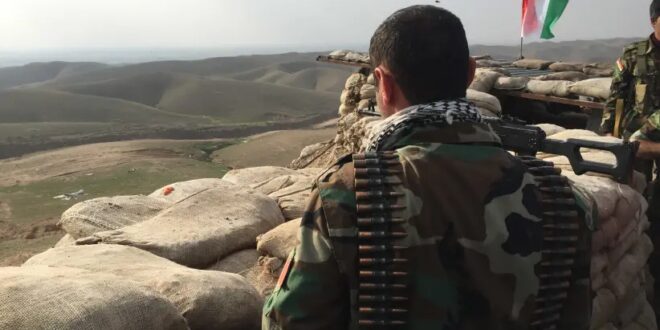 The Patriotic Union of Kurdistan has played a key role in the Kurdish struggle for decades but also has often been at odds with the other major Kurdish party, the Kurdistan Democracy Party.

Iraq is facing numerous crises this year, from pro-Iranian militia attacks on US forces, continuing ISIS attacks and now a relatively minor, but potentially important, power struggle among a political party in the Kurdistan region. The Patriotic Union of Kurdistan (PUK) is the second-largest political party in the autonomous Kurdish region. It has played a key role in the Kurdish struggle for decades but also has often been at odds with the other major Kurdish party, the Kurdistan Democracy Party. The PUK now appears to be rocked by an internal struggle between key figures, Bafel Talabani and Lahur Talabani.

For years, the PUK has appeared to have internal struggles and the area the PUK runs, called Sulimaniyeh and its surrounding governorate, has seen protests and crackdowns. Furthermore, the city and region of Kirkuk, once a PUK stronghold, was taken from the Kurdish region by Iraqi forces and pro-Iran militias in October 2017 in the wake of a Kurdish independence referendum. At the time, key figures in the PUK, recovering from the loss of famed PUK leader Jalal Talabani, agreed to a deal with Baghdad and Iranian interlocutors such as Qasem Soleimani. Among those who were involved in that deal was Bafel Talabani.

The eldest son of Jalal, born in 1973, is Bafel. Described as a former bouncer by one source, which may explain his physique, Bafel has had a serious career; When his father was President of Iraq from 2005 to 2014, Bafel played a key role in the PUK and its security. The New Yorker in 2007 noted, “Jalal Talabani’s wife, Hero, does not live in Baghdad with her husband. She stays in their home city of Sulaimaniya, where she runs a foundation and a television station, and publishes a newspaper. Years ago, Hero taught herself how to operate a video camera, and she filmed battles between peshmerga fighters and the Iraqi Army. She and Talabani have two sons: one, Bafel, runs the counterinsurgency wing of his father’s party; the other, Qubad, represents the autonomous Kurdish government in the US.”

The Talabanis have often had close relations with the UK and also with some US officials. This has led to media accounts of how some of them came back to the Kurdish region to fight ISIS. Polad Talabani, according to one account, came back to lead a “crack unit” after a request from his cousin Bafel. Polad’s brother is Lahur Talabani. Both fled Saddam Hussein’s regime and settled in the UK. According to reports, “Both went to Crofton Park School in Lewisham. Polad later took a motor mechanics course at Bromley College, while his brother, who is also in Iraq running an intelligence organisation, studied business at Greenwich University.”

Lahur and Bafel had similar careers. Both had been in the UK and grown up as leaders in the PUK. Lahur was once a representative of the PUK to Turkey and later received training with the US before helping found the Counter-Terrorism Group with Bafel in 2002. He played a role in the intelligence unit Zanyari, like Bafel did. His brother, Polad, became a commander in the CTG.

Meanwhile, the other son of Jalal Talabani, Qubad Talabani, also lived in the UK where he studied engineering before working in the PUK office in Washington and then working for PUK leader Barham Salih, who later became president of Iraq. He continued his close relationship with the US before coming back to the Kurdistan region in 2012 and became deputy prime minister of the Kurdistan Regional Government.

All of this matters only to show that the trajectories of Jalal’s sons, Bafel and Qubad, and their cousins Lahur and Polad, had much in common up until this power struggle. What has happened in the last week is that Bafel Talabani has appeared to remove Lahur as co-president of the PUK. He claimed it is to stop “smuggling, extortion, threats, and spying… We decided to make changes from the roots in all those security and party institutions that had been used by certain people for personal gains and against the interest of our nation and our PUK for years,” Bafel Talabani said in a Facebook post.

With Lahur pushed out, Bafel has choreographed a visit to various security and intelligence units, and with Qubad they have consolidated control over the Counter-Terrorism Group. They have also raided PUK media that was allegedly close to Lahur. This is difficult news for Lahur and Polad, who had played key roles in the war on ISIS and were generally admired and liked by many who met them.

Lahur was especially credited with close ties to the US and also to operations in Syria. This is a complex story but it’s worth explaining. In 2014, ISIS invaded Iraq and captured Mosul and other mostly Sunni cities. The Kurdish region was concerned but ISIS appeared to stop at the borders of the autonomous region in June 2014, sending hundreds of thousands of refugees fleeing to the Kurdish defensive lines. Many Christians swelled Erbil. The KDP assessed that ISIS would move South to Baghdad. Others in the PUK disagreed, sources told The Jerusalem Post in 2015. The PUK wanted a more active policy to check the ISIS advance, they said. This goes back to the PUK’s battles against Islamist groups such as Ansar al-Sunnah, Ansar al-Islam and Jund al-Islam in the early 2000s. These groups murdered PUK members and the US helped the PUK and its CTG fight the extremists until they were crushed.

In the end ISIS decided to attack the Kurdish region in August 2014, massacring Yazidis in Sinjar and aiming to take Erbil, Kirkuk and Dohuk. Kurdish fighters stopped them. A year later Lahur was encouraging the US to take an active role in Syria, where the US would help the Kurdish People’s Protection Units (YPG) and support the creation of the SDF. This angered Ankara, which claimed the YPG was linked to the PKK. Lahur Talabani, the Iraqi Kurdish intelligence chief, according to Newsweek, said it makes sense for US military planners to think of the Syrian and Iraqi theaters as one battlefield. “The border between the two countries has largely been eroded, and Raqqa and Mosul are only four hours apart,” he said at the Washington Institute for Near East Policy.

In 2017 in an interview he said he travelled to Baghdad every few months to meet intelligence counterparts there. “Even when there are tensions between the Kurdistan Regional Government [KRG] and Baghdad….At times, we have had a better working relationship with Baghdad than we have with our counterparts in Erbil,” he says. In that interview he claimed that he helped broker US support for the YPG in Kobani during the ISIS siege of the Syrian city in 2014. At the time the KRG also sent support via Turkey.

For those who admired Lahur he was a key figure in the defeat of ISIS. However, the wider context of Bafel and Qubad’s rise and the shifting of power away from Lahur, can be attributed to many factors. Ceng Sagnic, Chief Analyst of a multinational geopolitical consultancy firm, and the former Coordinator of Kurdish Studies Program at the Moshe Dayan Center, who is also a DC-based analyst, provided several insights into what has taken place.

In his view Qubad Talabani is close to the KDP in Erbil and had been sidelined in the past by Lahur. Bafel and Qubad have worked together now to secure key strategic positions. Qubad is a rising star in this context. “That can definitely be regarded more stability and less Tehran-Baghdad,” says Sagnic. What this means is that Iran’s inroads in Iraq may be impacted. Iran has been using pro-Iran militias to attack the US and the PUK has often been depicted as closer to Tehran, whereas the KDP is seen as closer to the US and Turkey. “Bafel made an alliance with his brother, and therefore KDP. If it doesn’t change anything, it will at least move Sulimaniyeh more reliant on Erbil, replacing Bagdad to some extent,” says Sagnic. “I think it adds up to a great deal in Iraqi politics.” The role of the CTG is also important for the US in security and stability, especially as the US has drawn down troops and must rely on what few local friends it still has. The new situation of the PUK will also help determine the next president of Iraq. “I’d also add that Barham Salih’s fate as the presidential nominee also rests on inta-PUK alliances,” says Sagnic. Salih might not get a second term. “Barham is known as the nominee of Lahur, hence his first photo after getting elected was with him in a show of force.”

Other factors are at work. In Erbil the KRG Prime Minister, Masrour Barzani, is seen as close to Qubad and Bafel.

Masrour Barzani is the son of Masoud Barzani, the KDP leader. Masrour’s cousin is Nechirvan Barzani, the President of the KRG. Nechirvan has enjoyed good relations with both Iran and Turkey in the past. It is believed that Iran has cautioned the PUK against totally ousting Lahur and that US envoy Brett McGurk, who was in Iraq this week, has also spoken with the PUK about the crisis. Reports say Lahur will be sidelined but not face further repercussions. He may go abroad for a short time.

In the end the struggles facing the PUK will not end. They have lost their onetime power in Kirkuk and they appear weakened. The Kurdistan region as a whole is facing increased action by Turkey fighting the PKK in the mountains. This has led to many villages being abandoned and the border region continues to be a conflict zone. The autonomous region has massive investment, including from Turkey, and no one wants to see it destabilized. However Iran and Turkey have designed on Erbil and Sulimaniyeh. The US and UK also have a role to play. The US, for instance, appears to be consolidating most of its forces in Erbil, having left many facilities.

Pro-Iran militias have used drones to strike at Erbil this year, endangering US forces. In addition a secret CIA hangar at Erbil airport was struck by a drone. Shoring up the CTG and Suli is important. Another side of this is Ankara’s desire to isolate the US role with the SDF in Syria. Iran is also pressuring the US in Syria and so is Russia and the Syrian regime. It is believed that Turkey also pressured Erbil to erode a deal with Delta Crescent company that wanted to do oil work in eastern Syria.

The overall story is not known but Turkey wants the SDF cut off from all support. The SDF had friends in the PUK and especially with Lahur. Members of the CTG, for instance, known as Lexoman Parastin, participated in some battles in Syria aiding the US-led Coalition. Flights from Suli were reported to go to eastern Syria. In an incredibly bizarre, an likely inaccurate account earlier this year, the CTG was even said to have been “involved in the US assassination of top Iranian commander Qasem Soleimani in the first days of 2020 in Baghdad, according to a new piece of investigative journalism.”

How all of this may have played into the removal of Lahur and his sidelining is unclear, but rumors have persisted for a year of differences. “I want to ensure you, when I or any other colleague visit another party, everyone in the party is aware, everyone has agreed to it, and we even set the program together,” Talabani said last year. “We have a united stance.” It turns out they did not have a united stance.

Post Views: 223
Previous US: Iran ‘deflecting blame’ for not returning to nuclear deal
Next Erdan: We’ll defend our right to Jerusalem against Hamas lies