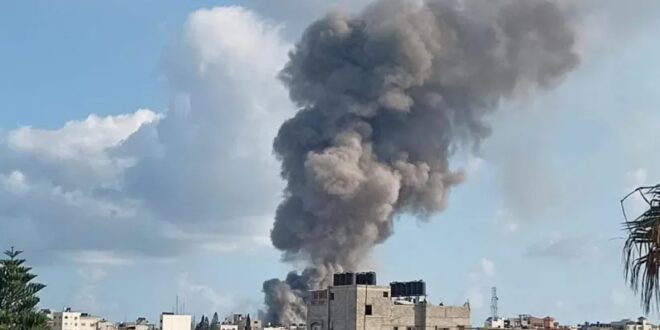 Images reportedly from the scene showed heavily damaged structures and a smoke cloud that could be seen from a distance.

One person was killed and 10 others were injured after a weapons storage belonging to the Palestinian Islamic Jihad terrorist movement at the Al-Zawiya market in Gaza City exploded on Thursday morning, IDF spokesperson for Arab media Avichay Adraee reported on Twitter.

The PIJ seemed to take some form of responsibility on Thursday evening, announcing that it would “rise up to its responsibilities” and follow up with all concerned parties concerning the explosion in the market. The terrorist movement expressed its “full solidarity” with those affected by the explosion.
The injured were transferred to Shifa Hospital in the coastal enclave. The Palestinian killed in the incident was identified by Palestinian media as Atta Saqallah.
“Instead of responding to UN calls for the reconstruction of Gaza, terrorist organizations continue to manufacture weapons and promote the construction of military sites,” added Adraee. “These terrorist organizations store their weapons in the heart of residential neighborhoods and among civilians, exposing them directly to danger.”
The terrorist groups in the Gaza Strip released a statement expressing their “full solidarity” with those affected by the explosion, stressing the need to rise up to national responsibility in order to prevent the accident from occurring again, according to Palestinian media.
Images reportedly from the scene showed heavily damaged structures and a smoke cloud that could be seen from a distance. A number of smaller booms could be heard in video reportedly showing the moments leading up to the larger explosion.
The Hamas Interior Ministry stated that the explosion occurred in a multi-story house in the market, leading to the collapse of large parts of the home and damage to nearby homes and shops.

Explosions caused by weapons stored in civilian homes have occurred in Gaza in the past.

In January, an explosion destroyed a home in Gaza where terrorists were attempting to prepare explosives. At the time, Adraee said on Twitter that “the story of the house is the story of many homes in the Gaza Strip,” that are being used for weapons storage.

“They have turned [homes] into warehouses of weapons, military parts and missiles for terrorist organizations and the people who pay the price in the end are the innocent civilians,” added Adraee at the time.

Post Views: 169
Previous US senator says Turkish actions against pro-Kurdish party like ‘if Biden banned the Republican Party’
Next IDF arrests two suspects who infiltrated into Israel from Lebanon