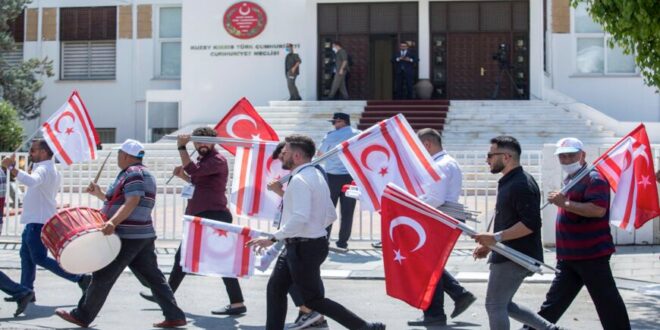 Has Erdogan started a journey of no return in Cyprus?

Unless he is playing a game of brinkmanship to force the Greek Cypriots into a settlement, Erdogan’s tough moves in the Cyprus conflict are raising the specter of Turkey’s eventual annexation of Northern Cyprus.

Having exhausted the yields of his Syrian, Libyan and Eastern Mediterranean ventures, Turkish President Recep Tayyip Erdogan has turned to long-divided Cyprus for the nationalist fuel he needs in domestic politics. Back in 2004, Erdogan backed the so-called Annan Plan to reunify the island, but now he is forging ahead in an opposite lane, advocating a two-state solution in defiance of the long-standing settlement parameters in the conflict.

Accompanied by a large delegation, Erdogan visited the Turkish Republic of Northern Cyprus (TRNC) July 19-20 to mark the 47th anniversary of Turkey’s 1974 military intervention, which followed a Greek Cypriot coup aimed at uniting Cyprus with Greece and has left the island divided ever since. “No matter if 47 years or 147 years or 247 years pass, the Turkish Cypriot people will never back down from their independence,” Erdogan declared in Nicosia in reference to the TRNC, which only Ankara recognizes.

Erdogan’s visit was preceded by much speculation over the “good news” he said he would deliver to the Turkish Cypriots. A widespread guess was that he would announce the full reopening of the coastal resort of Varosha, which was a bustling holiday spot before being sealed off after the Turkish intervention. Despite the outstanding issue of Greek Cypriot properties and a 1984 UN Security Council resolution prohibiting the resettlement of Varosha, the area was partially reopened in October. Yet Erdogan’s visit saw an announcement of a “second phase” in the partial reopening rather than a bolder move. Under the plan, 3.5% of Varosha will be reopened and demilitarized, while Greek Cypriots owning real estate in the area will be able to apply to a Turkish Cypriot reparation commission to reclaim their properties or seek barters or compensations, even though financial strains have been hampering the work of the commission.

Another guess about Erdogan’s “good news” was that Azerbaijan and Pakistan might recognize the TRNC. Yet he only said the issue was a constant topic in his discussions with Azerbaijani President Ilham Aliyev.

Some speculated Erdogan might announce the renaming of the TRNC to the “Cypriot Turkish State” or the discovery of gas reserves in its waters. Others raised the prospect of a move to establish a permanent Turkish air base and a naval base in the TRNC to bolster Ankara’s posture in the energy rivalry in the Eastern Mediterranean.

None of those guesses was even close. What Erdogan announced was a project to build a “splendid” complex consisting of a presidential palace, a parliament building and a park for the Turkish Cypriots, which was essentially a recycle of existing plans. He described the current presidential office as “a shanty house” left from British rule and the existing parliament building as “not befitting” the TRNC, adding that he was personally following the project and construction would begin soon. His words must have been offensive to the Turkish Cypriots, as both buildings are of high symbolic value despite their modest architecture, having borne witness to critical junctures in the history of the island. Erdogan had erected a gigantic palace for himself in Ankara several years ago, but Turkish Cypriot leaders had never asked for one.

Erdogan had already floated plans for a new presidential palace during his visit to Nicosia in November, and funds were allocated for its construction in a Turkey-TRNC financial cooperation deal in March. Thus, the project was hardly something new, and many were left wondering whether Erdogan had planned to announce something else but had to step back. Earlier this month, European Commission President Ursula von der Leyen said she had cautioned Erdogan how sensitive the European Union was on what his visit to the island would entail. Meanwhile, a group of US senators urged President Joe Biden “to pressure Turkey to halt its provocations in Varosha.”

Whatever the truth behind the “good news,” Erdogan has taken an open-ended and contradictory course on the Cyprus issue. On the one hand, he argues that the Greek Cypriots have continued to hamper settlement efforts since their rejection of the Annan Plan and the two-state solution is now the only option left. In an apparent signal that he is bent on Turkish Cypriot independence, he lauded the presidential complex project as a symbol of statehood and noted that Ankara no longer wished to use the term “Northern Cyprus” but instead “Cypriot Turks.” On the other hand, some see his moves as an attempt to pile pressure on the Greek Cypriots to push them into a settlement amid reports that the Turkish Cypriot negotiating team is working on a proposal to reunify the island on a confederation basis.

And even if his steps are not brinkmanship tactics to force a settlement but genuine efforts toward a two-state solution, his treatment of the Turkish Cypriots belies that objective. He treats Turkish Cypriot President Ersin Tatar as his private secretary and the TRNC’s government and parliament as rubber stamps of Ankara’s decisions, while actively promoting an Islamist-conservative transformation in the markedly secular Turkish Cypriot society. This attitude inevitably evokes Turkey’s annexation of Northern Cyprus as the ultimate scenario in his mind.

No doubt, Turkey has always had a decisive say in Turkish Cypriot affairs, but Erdogan feels entitled to dictate, eating into the autonomous space that Ankara has traditionally left to the Turkish Cypriot leadership. Former TRNC President Mehmet Ali Talat said in a recent interview that the current situation was “as if Turkey has seized the administration.”

Tatar, who became TRNC president last year after a stint as prime minister, has displayed unprecedented docility and rapport in relations with Ankara. The Turkish Cypriot opposition likens him to the trustees that Ankara has installed to run dozens of local administrations seized from Kurdish mayors. Erdogan openly threw his weight behind Tatar during the two-round elections in October. Other prominent contenders such as Mustafa Akinci and Serdar Denktash said they came under pressure from Ankara to pull out of the race. Akinci even claimed he received threats from Turkish intelligence operatives. There were also allegations of vote buying for Tatar and, according to Denktash, Erdogan sent a special team to back and guide Tatar’s campaign on the ground.

Yet Ankara’s interventions have not gone without resistance. Two opposition parties as well as Talat and Akinci boycotted Erdogan’s speech at the Turkish Cypriot parliament amid growing grassroot pressure on opposition leaders to stand up to Ankara’s flouting of Turkish Cypriot will.