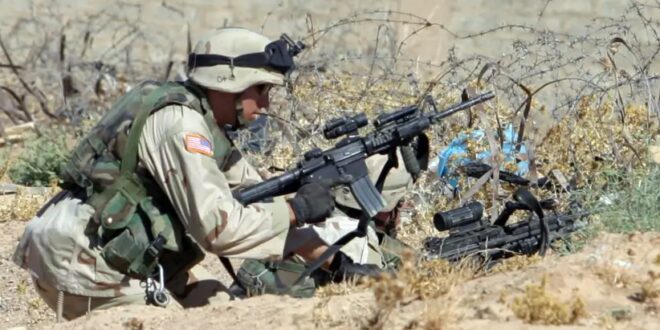 Pro-Iran militias in Iraq warn US over withdrawal doublespeak

The US has indicated that it will withdraw its “combat troops” from Iraq, but do they even exist?

The US has indicated it will withdraw “combat troops” from Iraq. But it doesn’t have combat troops there, and pro-Iran militias have indicated they believe America is being misleading.

The reports of the withdrawal were first reported by Nafiseh Kohnavard, a correspondent who is focused on Middle East issues for the BBC World Service and BBC Persian and is an expert on developments in Iraq. Other networks have reported the same: that the US claims it may be withdrawing some personnel from Iraq and that Iraq’s prime minister will discuss the matter with US President Joe Biden.

For observers of Iraq who have spent years there or covered the US-led coalition that helped defeat ISIS, there are many questions about what Washington is doing. The US has had an “advise and assist” and a “train and equip” role in Iraq in the past. The US-led coalition is in the country at the invitation of the Iraqis. The US returned in 2014 to help fight ISIS, after having left in 2011.

The US works “by, with and through” the Iraqi security forces, including the Kurdish Peshmerga. The coalition has trained some 200,000 people in Iraq, as well as providing equipment. US contractors based in Balad also help maintain Iraqi warplanes.

Since May 2019, US and coalition forces have come under attack in Iraq by pro-Iranian militias.

An American contractor was killed in December 2019, which resulted in US retaliation, including protests at the US Embassy and the killing of IRCG Quds Force commander Qasem Soleimani. The result of these tensions was further attacks on coalition forces; several were killed at Camp Taji in August 2020 while the US repositioned its forces, leaving half a dozen small facilities in the area.

By 2021, American forces were concentrated at Al Asad base in western Iraq, in Baghdad and also in Erbil in the autonomous Kurdistan Region. Pro-Iran militias have begun using drones to attack the US in the Kurdistan Region.
US official Brett McGurk, a former coalition envoy who played a key role in Iraq for decades, recently traveled to Baghdad. The rumors that emerged from that trip were of the US withdrawing “combat troops.” However, this term is misleading because US forces are not engaged in combat in Iraq.

The US provides the Iraqis with training and ISTAR (intelligence, surveillance, target acquisition and reconnaissance) missions, such as drone strikes or support for airstrikes. Generally, the pandemic and US-Iran tensions have meant US forces don’t do much of their old role. Nevertheless, their presence is important.

Currently, the pro-Iran militias have been speaking strongly to Iranian media outlets, including Fars News Agency and Tasnim News Agency, warning the US against any obfuscation or shenanigans.

Qasim al-Kariti, a commander from the Iraqi Al-Hashd al-Shaabi organization, said the US was not serious about withdrawing its troops from Iraq, Fars News reported. “The presence of US forces showed that the statements of the Iraqi government and the American side were false,” he told Al-Ahwd news site.

Pro-Iran militias, which can number some 100,000 fighters, have claimed to have used “thermal cameras” to track US movements and US helicopters. They are grouped under the Hashd al-Shaabi, or Popular Mobilization Units, which are an official paramilitary force, similar to the IRGC in Iraq.

These groups include numerous historically pro-Iranian groups, gangs and militias, including Badr, Asaib Ahl al-Haq, Harakat Nujaba and Kataib Hezbollah. In recent years, few new groups have emerged to take credit for attacks on US forces, but most analysts think these groups are just fake names for elements of Kataib Hezbollah. The Hashd also have a bunch of territorial regiments that are linked to various shrines.

Pro-Iranian forces have been strengthened, Kataib Sayyid al-Shuhada commander Abu Alaa al-Walae told the Associated Press in Baghdad in early July, and he vowed to retaliate against the US for an airstrike in Syria.

The American “occupier” must be expelled, Walae was quoted by Fars News as saying, adding that “all those who advocate for the United States to remain in Iraq must accept the consequences, such as the shedding of blood [of the Iraqi people] and the violation of their dignity.”

The Iraqis have continued to negotiate, while the Iraqi government wants the troops to leave and only military advisers and trainers to remain, but Washington wants to keep some of its troops there, according to the report.

This is the fourth round of “strategic” talks between the US and Iraq. Pro-Iranian groups continue to target logistics convoys that supply US and coalition forces. The vulnerability of these convoys shows the “limitations” of the US mission, the report said.

The security chief of Kataib Hezbollah’s battalions in Iraq “warned that the [pro-Iranian] resistance would continue its operation if the United States did not withdraw its troops from Iraq,” according to Tasnim’s Abu Ali al-Askari. “If the United States does not withdraw its forces from Iraq, the resistance will continue its operations until the last American soldier leaves,” he wrote.

Askari wants the US to explicitly announce the withdrawal of its forces and wants to see them leave. He says attacks will continue and “intensify” if the “resistance” sees the US is not leaving. He believes Iraq may be deceived by the US.
Meanwhile, Iraqi Foreign Minister Fuad Hussein is leading discussions with the US at the behest of Prime Minister Mustafa al-Kadhimi.

“The remarks of the Iraqi foreign minister have provoked a negative reaction from some Iraqi politicians and groups,” Tasnim reported. “Fuad Hussein has spoken of the need for US troops to remain, while former interior minister and current Iraqi National Security Adviser Qassim al-Araji, who is in the strategic talks, has called for an immediate end to the [US presence].”

The presence in future discussions with the US of Araji and other senior figures who are close to Iran, such as Hadi al-Amiri, has raised eyebrows among some more extreme pro-Iran elements who have only complained about their willingness to talk to the US and wait and see if it leaves.

These voices want revenge now against what they see as US “occupation” and airstrikes on allied militias in Syria.

Post Views: 565
Previous Afghan beheaded by Taliban for brief stint as US Army translator – report
Next Right of Conquest – a racist doctrine