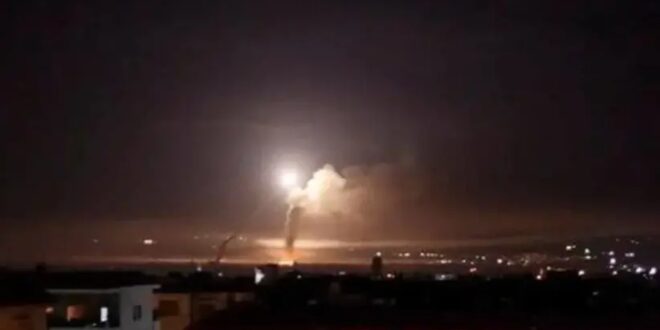 Is Russia sending a message to Israel or to the US, or is someone else trying to create controversy? What is the goal of Iran here – or the Syrian regime or other regional powers?

Russia could be moving to pressure Israel to stop airstrikes in Syria. Reports began to surface this weekend, beginning with an article at London-based Asharq al-Awsat that cited a “well-informed” Russian source.

The report was carried in Turkey and other media in the region with interest. According to these reports, Russia might even strengthen the Syrian regime’s air defenses.

What do the reports say? The Russian source hinted at the possibility of “closing Syrian airspace” to Israeli planes, Asharq al-Awsat reported. This comes in response to allegations that Israel has “intensified their raids in the past two days against Iranian and Hezbollah sites in northern and central Syria.”

Russia released two statements in the wake of a raid “targeting a research center in the countryside of Aleppo, and the other on a site for Iranian forces to be stationed in Al-Qusayr, near Homs,” the report said.

“This is directly related to the talks that were launched with the United States following the first summit that brought together presidents Vladimir Putin and Joe Biden last month,” the Russian source told the Arabic website, adding that “Moscow was calculating its reactions in the past because Tel Aviv [Jerusalem] is coordinating all its movements with Washington, while the Russian communication channels with Washington were cut off, and it appeared, from the current contacts with the American side, that Moscow obtained confirmation that Washington does not welcome the continuous Israeli raids.”

The report highlights a complex puzzle. “The Israelis felt that the air defenses in Syria had been activated, and the fact that practically all the launched missiles had been destroyed, indicates a fundamental change in the mechanisms for dealing with this file and that Israel’s aviation has not since entered the Syrian airspace and is carrying out attacks from the ground,” the report said. Russia supposedly provided the Syrian regime with “modern air defense.”

The source went on to claim that Russia’s demands might involve closing off “all possible targets” inside Syria. The author notes that in the past, Moscow did not object to attacks on Iranian targets in Syria. It has “run out of patience,” the article said, but then also quoted the Russians as saying they are actually not impatient. This hints that high-level talks with the US have some impact on the issue of staying silent about Israeli airstrikes.

But it is not clear from the article what is really going on. Why Moscow would reveal to a newspaper that it heard the US does not “welcome the continuous Israeli raids” is curious.

This “impression left space for Russia to act more freely in supporting Assad forces in Syria with more advanced anti-missile systems and know-how, to make them more capable of shooting down Israeli armaments,” the report said.
A Turkish media said: “Israel has been targeting Iran-linked military targets in the war-torn country’s regime-held areas with airstrikes without entirely acknowledging doing so. The Israeli strikes have also been repeatedly criticized by the Syrian regime ally Russia.”

Meanwhile, reports said Russian Foreign Minister Sergey Lavrov had asked Israel to provide Russia with information on any Iranian threats in Syria so that it could deal with them.

“If Israel is really forced to respond to threats to Israeli security coming from the Syrian territory, we have told our Israeli colleagues many times: If you see such threats, please give us the information,” Lavrov was quoted as saying by Russia’s Sputnik media.

Add to this a third detail noting that airstrikes carried out earlier this year “were carried out with intelligence provided by the US, a senior American intelligence official told the Associated Press.”

This leaves many questions: Is Russia sending a message to Israel or to the US, or is someone else trying to create controversy between Russia and Israel? What is the goal of Iran here – or the Syrian regime or other powers in the region?

It is known that Gulf countries, as well as Egypt, Iraq and Jordan, likely want the Syrian regime to be stabilized and stronger so that it can rejoin the network of Arab states in the region, after having been kept out in the cold since 2011’s Arab Spring.

In short, there are many interested parties eager to see Syria return as a normalized state, and thus the free-for-all of airstrikes by various countries in the beleaguered country may end. This would include a desire to see the US and Israel reduce airstrikes and also have Turkey stop destabilizing northern Syria.

It would also likely mean wanting Iran to stop its entrenchment. Tehran may have reduced forces in Syria slightly in recent years. However, Iran has a network of facilities, such as Imam Ali base near the Iraqi border and the T-4 base. It also backs militias, and Hezbollah has been operating freely in Syria.

THE OTHER interesting messaging here relates to Moscow’s apparent view that the US also may be shifting its views on the airstrikes. It was widely reported in January that the US was backing Israeli airstrikes in Syria. The reports that the US wanted to work more closely with Israel in Syria date from the period of former US president Donald Trump’s administration and were tied to key figures in the administration who appeared to approve of Israel’s policies in Syria, including Mike Pompeo, John Bolton and US envoy James Jeffrey.

The key here is that Washington believed Israel’s “war between wars” campaign was designed to prevent Iranian entrenchment in Syria and weapons trafficking to Hezbollah, and it was important for US policy. In years past, it was reported that Iran moved ballistic missiles to pro-Iranian militias in Iraq and drones to Syria that threaten Israel and that it sought to move precision-guided munitions to Hezbollah. Iran also tried to move the 3rd Khordad air-defense system to Syria in April 2018.

There have been tensions before. Syria shot down a Russian military plane in September 2018, mistaking it for an Israeli jet. This angered Moscow, and Jerusalem sent officials to discuss the crisis. Russia at the time hinted it would send Syria the S-300 air-defense system.

There were also reports at the time that Russia would try to keep Iranian forces away from the Golan Heights as the Syrian regime retook areas nearby. Hezbollah did set up sites near the Golan and sought to launch drones against Israel in August 2019.

The tensions with Syria have also led to other incidents, such as errant Syrian air-defense missiles being fired wildly. One landed in the Negev in April, and in 2017, Syria fired an S-200 at Israeli planes that flew over Jordan.

In November 2019, Moscow revealed alleged Israeli airstrikes, claiming Israel flew over Jordan during a strike on Syria. In January 2019 and February 2020, Russia also expressed concern to Israel about airstrikes in Syria.

In light of all this, the reports on July 24 about Russian views on Israeli airstrikes in Syria could either reflect a policy change or more of the same rhetoric as in the past. It could also be messaging to the US and Iran.

Pro-Iranian militias are increasingly operating in Syria and acquiring land and basing. A member of the Fatemiyoun Brigade, a unit of Afghan Shi’ite fighters that works with Iran in Syria, was reportedly killed in recent airstrikes, according to Al-Hadath. Iran has been relatively quiet about this, but pro-Iranian militias in Iraq have been upping threats to the US and its forces in Iraq and Syria.

This could all be tied together. In the past, pro-Iranian militias in Iraq have accused Israel of airstrikes, illustrating that the issue of airstrikes in Syria or the “war between wars” campaign is not just about Iran’s role in Syria, but rather Iran’s role in the wider region, too.