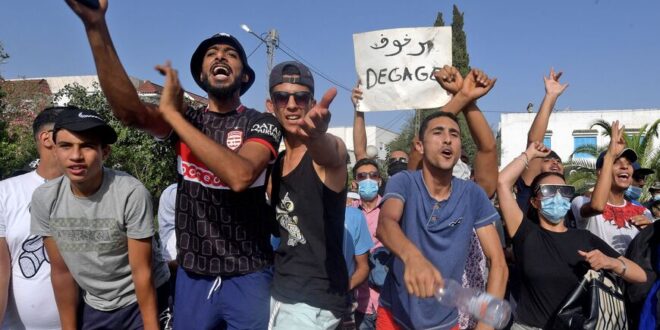 On the streets of Tunis, rumors and anticipation of July 25 demonstrations have been circulating for weeks.

While July 25 is the anniversary of the true birth of Tunisia as an independent republic, this year the date saw widespread protests that climaxed with President Kais Saied suspending parliament and sacking key ministers, including the head of government.

Despite the weekend “lockdowns,” part of the ailing government’s desperate attempts to control the high infection rate of COVID-19 in Tunisia, currently the most infected country per capita in Africa according to the World Health Organization, Tunisia saw widespread demonstrations across the country. Protests ranged from Sidi Bouzid in the south, which was the birthplace of the 2011 popular uprising, to the country’s north.

The most violent demonstration was in the southern city of Tozeur, once a glamorous holiday destination and now one of the remote disfavored regions suffering gross unemployment and financial privation. Videos circulating on social media saw angry men breaking into the Ennahda movement’s regional offices and rampaging through, breaking furniture and televisions. Distressing videos of clashes with police and excessive use of tear gas flooded Facebook. The most disturbing of all showed a male demonstrator in Kairouan waving the Tunisian flag being pushed from the top of a high building by an unknown man.

Rumors involving July 25 demonstrations had been circulating for weeks. Since 2011, December and January have been the traditional marching season, usually beginning Dec. 17, the anniversary of the day that fruit and vegetable stall holder Mohammed Bouazizi set himself on fire, demonstrating against the injustice served to him by a market official who denied him a permit and slapped him across the face. This famously ignited the Jasmine Revolution. Over time, however, it did not meet people’s expectations. While there have been protest marches and angry young people rioted following the deeply unpopular 2018 finance bill, every movement and season of protest has fizzled into exhaustion and apathy.

For the past six months, Tunisia has been suffering under the weight of political insecurity, and a political class who have cared more for personal politicking than for finding the much-needed real solutions to Tunisia’s collapsing economy, the weakening dinar and the growing disparity between rich and poor. What the public saw was a standoff between the “three presidents” — the president of the republic, Kais Saied, the speaker of parliament and leader of the Muslim democratic party Ennahda, Rached Ghannouchi, and the prime minister and interim interior minister, Hichem Mechichi. The enmity between the men deepened without any giving of ground or real effort to overcome the divide.

This instability led to numerous changes of government officials; most notably, multiple changes of health ministers have been perceived to be a cause of the pandemic spinning out of control in Tunisia, with the WHO declaring it the most infected country in Africa with the highest death rate. As a demonstrator working in pharmaceutical science told Al-Monitor July 25 during the protest at the parliament, “There have been some five different health ministers, so no stability, so no strategy for fighting COVID.”

Myriem ben Gayess, a student who is a member of the July 25 Movement, told Al-Monitor that although the movement has deeper roots, “The Facebook group was set up July 10 when Ennahda announced it was due 3 billion euros [$3.5 billion] in reparations” as part of the transitional justice process. The Facebook group has been an engine of the movement, helping ignite countrywide demonstrations. She said that “550,000 members is not a small number of people.”

Zied Jhezaiedi, an administrator in the movement’s Facebook group and pharmaceutical professional, told Al-Monitor, “I don’t think anyone in Tunisia has not been touched by COVID either by infection or they have lost someone.” The past few months have seen a constant chopping and changing of rules of confinement, confusing citizens and seeing cities such as Kairouan and Sousse under the control of the army to enforce confinement.

Citizens have become increasingly frustrated and confused by constant changes in the limitations on movement and controls on business. But the last straw for many took place July 20 when Mechichi accused Health Minister Faouzi Mehdi of a “criminal act” when he opened up “drop-in” vaccination clinics during Eid al-Adha and promptly fired him.

The day before the protests saw 317 deaths from COVID-19; the country has seen 18,600 deaths and 573,394 cases in a population of just under 12 million. The restrictions on commerce have exacerbated an already difficult situation for business and trade in Tunisia. Jhezaied said, “The pharmaceutical industry [in Tunisia] is ready to expand, but we are blocked by bureaucracy and red tape.”

The protest outside the parliament was later dispersed by police, who chased protesters with batons and use of tear gas.

It seemed to be a small popular movement. But then the president announced the “freezing of parliament” by invoking Article 80 of the Tunisian Constitution. He fired three key ministers — Mechichi, Defense Minister Brahim Baragi and Hasna Ben Slimene, the minister in charge of civil service and interim justice minister.

The evening of July 25 saw celebrations in the streets of Tunis and across the country as the president appeared to have brought a brisk solution to their woes by effectively ousting unpopular ministers and seemingly spiking the guns of Ghannouchi and his Ennahda members of parliament. A statement by a member of the Ennahda executive said, “The speaker made his way to the Assembly with his two deputies and a number of MPs to ensure that the Assembly remains in a state of permanent sessions as required by the constitution.” However, the group was not allowed to enter. “They were stopped by Tunisian army personnel who refused him entry saying they had been ordered to deny him entry.” At the same time, Ennadha’s public appeals for democracy to be upheld democracy have fallen on deaf ears.

The morning of July 26 saw a standoff at the parliament once again, this time between Ennahda supporters and supporters of Saied and the popular movement. Separated by riot police and a barricaded no-man’s land, they exchanged insults. Ennahda demanded that their parliamentarians and leader be allowed entry, while the pro-Kais Saied group demanded Ghannouchi “degage” (get out), echoing the calls for President Zine El Abidine Ben Ali to “degage” more than 10 years ago.

As the temperatures rose to over 41 Celsius (106 Fahrenheit), energy dissipated and the crowd dispersed and the ramifications of the president’s sweeping changes began to become clearer.

Said Benarbia, the director of Middle East and North Africa Program of the International Commission of Jurists, said in a press release, “Through his actions and usurpation of power, President Kais Saied represents a direct and imminent threat to the constitutional order and the rule of law in Tunisia.”

Other worrying events July 26 were the forced closure of the Tunis bureau of the Qatari-owned TV channel Al Jazeera and the appointment of the head of presidential security, Col. Maj. Khaled Yahyaoui, as interim interior minister.

The Biden administration said it is assessing the situation and voiced concern, urging all parties “to avoid taking any actions that could stifle democratic discourse or lead to violence.”

Belhassen Ennouri, a lawyer who has been involved in the documentation of the National Dialogue that followed the revolution, said, “Yes, we can say that there has been a deviation from the constitutional law; however, it is within an illegal framework as parliament has failed to vote in the constitutional court, so we are seeing a real challenge of what law really is in Tunisia.”

Ennouri said, “The president invited key civil society groups such as Les Femmes Democratis and UGTT [the General Union of Tunisian Students] to reassure them.” He added, “Civil society was reticent because there is a lot of legitimacy and faith in the presidency because the people are fed up with the failures of the government and parliament. They were shocked that Ennahda demanded damages [for imprisonment and torture under Ben Ali] during a period when Tunisia cannot even afford bleach for its hospital floors and those shocks have been happening on a daily basis for the past 10 years.”

Ben Gayess, who said she was never a supporter of and did not vote for Saied, said she thought the result of Saied’s actions will be a country changed for the better. Her willingness to overlook Saied’s seemingly autocratic actions may be similar to the positions of many of the 550,000-strong following of the July 25 Movement’s Facebook group.

Ennouri said, “We can expect for anything to happen, even something more drastic.”