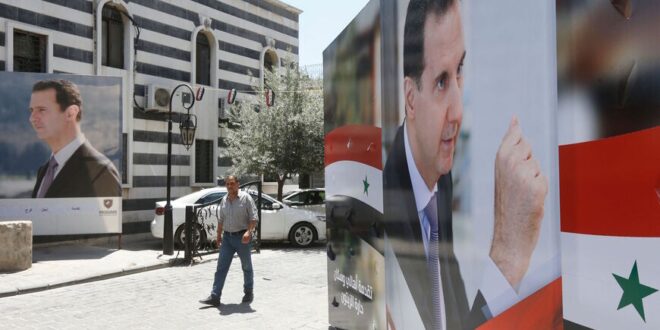 The wave of sanctions targets eight military prisons, including the notorious Saydnaya prison outside the capital Damascus that rights groups have described as a “human slaughterhouse.”

The Biden administration on Wednesday issued its first round of Syria-related sanctions since taking office, designating a number of regime detention centers and prison officials, as well as a Turkish-backed Syrian rebel group.

“The individuals and entities we are designating today are party to gross violations of human rights, including supervising the torture and killing of detainees,” Andrea Gacki, the Treasury Department’s Director of the Office of Foreign Assets Control, told reporters.

The wave of sanctions targets eight military prisons, including the notorious Saydnaya prison outside the capital Damascus that rights groups have described as a “human slaughterhouse.” Also hit with sanctions were five senior officials within the Syrian intelligence apparatus who ran the prisons.

Since the start of the civil war in 2011, hundreds of thousands have been detained in regime prisons, at least 14,000 of whom the Syrian Network for Human Rights estimates have been tortured to death. More than 130,000 people reportedly remain missing or are arbitrarily detained, including American citizens Majd Kamalmaz and Austin Tice.

Omar Alshogre, a former Syrian prisoner and torture survivor who serves as the director of detainee issues at the DC-based Syrian Emergency Task Force, said the designations were the culmination of years of advocacy and documentation work by Syrian activists.

“I feel like we’re getting closer to justice, and that’s so important because accountability and justice is essential for achieving freedom and democracy in Syria,” he said.

Officials also unveiled sanctions on Ahrar al-Sharqiya, a hardline Turkey-backed faction operating in northern Syria that is accused of unlawful killings, abductions, torture, and seizures of private property belonging to Kurds, Yazidis and other minorities. Two of the group’s leaders were also sanctioned.

Ahrar al-Sharqiya’s roadside killing of a prominent female Kurdish politician in 2019 was condemned by the United Nations as a possible war crime, and the Treasury Department accused the group of incorporating former Islamic State members into its ranks.

The sanctions announced on Wednesday are the first under the Biden administration, which critics charge has been slow to make use of the Caesar Syria Civilian Protection Act. Named for the defector who smuggled evidence of war crimes out of Syria, the bipartisan US law allows for sanctions on anyone — Syrian or foreign — who provides assistance to the regime’s military operations or the country’s construction, engineering, energy or aviation sectors.

In its final six months in office, the Trump administration used the Caesar law, which aims to choke off President Bashar al-Assad’s financial lifelines, and other authorities to issue more than 100 sanctions on the Syrian regime, its enablers and members of Assad’s family.

US officials described Wednesday’s actions as targeting perpetrators of human rights abuses, not the regime’s financial backers. None of the designations were applied using the Caesar law.

On June 10, the Biden administration removed designations on two companies linked to Samer Foz, a Syrian businessman sanctioned in 2019 for leveraging “the atrocities of the Syrian conflict into a profit-generating enterprise.”

The announcement, which also included the removal of certain Iran-related sanctions, came as Washington was preparing to enter another round of indirect nuclear talks with Tehran in Vienna. In a letter to the Treasury Department last month, a group of three Republican lawmakers expressed concern over the delistings and said the timing “raises major questions.”

Gacki on Wednesday described the sanctions removal as the result of a “standard reconsideration process” led by the Treasury Department. She declined to say whether the delisted companies had been dissolved or sold outside of Foz’s network.