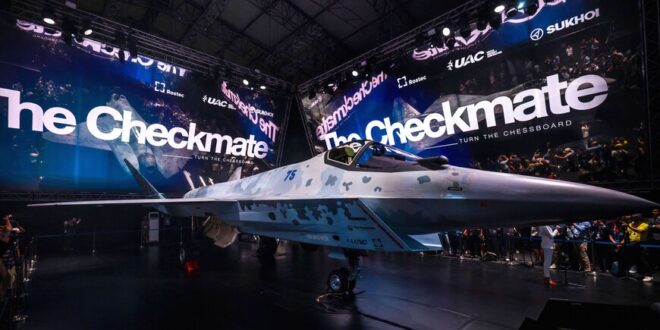 Russia tries to compete with US in Mideast weapons market

Russia’s prospects in the Middle East arms market will depend on its ability to master fast production of the latest models of military equipment.

The MAKS-2021 International Aviation and Space Salon, held in the Russian city of Zhukovsky just outside Moscow, concluded July 25 with over $3.5 billion in contracts awarded to attendees. Modern samples of Russian military equipment were presented throughout the six days of the show, including combat aircraft, helicopters, drones and anti-aircraft missile systems. The greatest interest was aroused by the demo model of the newest Russian tactical fighter, the Sukhoi LTS, which has already received the unofficial nickname of “Su-75 Checkmate.” Russia has especially emphasized that the countries of the Middle East could become its potential buyers. In terms of its characteristics and dimensions, Moscow is marketing the fighter as a close analogue of the American F-35.
While the list of states with which military weapons contracts were concluded has not been disclosed, it was announced that Russia reached preliminary agreements with the United Arab Emirates (UAE) for the supply of civilian helicopters.

Although the first recipient of the Sukhoi LTS fighters will be the Russian Ministry of Defense, there is indication that there are plans for a focus on export. It has already been reported that deliveries of the fighter abroad could begin in about 5½ years. The point price of a new fighter for a foreign customer will be about $30 million, excluding any additional costs. Yet the contract price of the aircraft may turn out to be significantly higher, in the range of $55 to $70 million. This fighter will be able to compete in price not only with the much more expensive fifth-generation aircraft of the F-35 type, but also with the remaining so-called “generation 4+” fighters of the F-type, including the latest F-16.

The Su-75 may indeed garner interest in the Middle East, where many states are in need of modern 5th generation fighters. The states that produce such jets, primarily the United States and China, are extremely reluctant to export them. Therefore, for the time being, most countries in the region with the appropriate financial capabilities are forced to be content with aircraft of the 4+ generation. The only exception is Israel, which has received F-35s. While a deal to sell F-35s to the UAE was announced in the final days of the Trump administration, it has faced difficulties and no date has been set for delivery.

The absence of a Russian-made new 5th generation fighter — ready for full-scale production and export — reduces Moscow’s ability to gain a foothold in the arms markets and those Middle Eastern countries where Russia has already been able to supply certain samples of its modern weapons. The sale of S-400 anti-aircraft missile systems to Turkey was an absolute success of Russia. This has already caused controversy between Ankara and Washington, and led to the United States expelling Turkey from the F-35 program. However, Russia was unable to take full advantage of this development, since it could not offer Turkey an alternative to this American fighter jet.

The Russian fifth-generation aircraft Su-57 is still far from the start of mass production. The jet is still produced in individual copies, a time-consuming process that is unlikely to be able to satisfy the needs of the Russian Aerospace Forces themselves in the near future. The aircraft has not been accepted into service in the Russian military. Moreover, it is prohibitively expensive. In this situation, there are hardly any buyers who would want to get a combat aircraft that is not used by the manufacturing country itself. However, if the Su-57 were launched into mass production, it cannot be ruled out that Ankara could purchase a small batch of these aircraft in order to put additional pressure on Washington to lift the blockage of F-35 sales to Turkey.

In addition to the United States, Russia is also competing with China, which is ahead of Russia in the development and production of fifth-generation aircraft and may bring its jets to the Middle East arms market earlier than Russian ones. We are talking about the heavy Chinese fighter Chengdu J-20, which is used by the Chinese military but will not be exported until the needs of the Chinese armed forces are met. Also in China, a lighter 5th generation fighter — Shenyang FC-31 — has been developed and, unlike the Russian Su-75, it has already passed several stages of flight tests.

Russia’s difficulty in accessing the arms markets of the rich Middle Eastern states, primarily the Persian Gulf countries, is explained by the absence of mass production of any modern types of weapons that go beyond modernized Soviet models.

In the 1990s, Russia had strong military-technical ties with the states of the Persian Gulf, since at that time it possessed types of weapons that were modern for this period, created in the last years of the USSR, which were of interest to the Arab monarchies. It was then that Russia was able to deliver large batches of BMP-3 infantry fighting vehicles, Smerch and Uragan MLRS, Pantsir air defense missile systems and other weapons systems to the UAE and Kuwait. However, in Russia itself the creation and design of new types of weapons ceased until the 2000s.

Thus, Russia will likely return to the arms market of the Gulf states only after new types of weapons enter full-scale mass production in Russia itself. In addition to the above-mentioned Su-57 and Su-75 combat jets, this applies to the T-14 Armata tank, the T-15 and Kurganets infantry fighting vehicles, the Boomerang wheeled combat armored vehicles, the coalition artillery systems, among others. Although these weapons have been shown at parades and exhibitions for many years and Moscow has announced the start of their serial production, in fact they have not yet been made in any noticeable volume and are still a rather experimental series. It is premature to talk about the start of their export.

Also, the statements by various Russian representatives claiming that modern types of Russian-made weapons were successfully tested in Syria, which will now find their buyer, are also far from reality. Russia failed to use its military operation in Syria to promote its own weapons for export to the countries of the Middle East.

In the Syrian campaign, Russia used mainly equipment based on Soviet developments. So the newest attack aircraft Su-34, which Russia used in Syria, is a modernization of the Su-27 fighter and began to be designed back in the USSR, as an analogue of the American F-15E aircraft with similar characteristics. At the same time, the F-15E has been in service with many states for more than 30 years and has significantly more experience in various conflicts than the Su-34. It thus has no export prospects in the Middle East, despite unverified rumors about Algeria’s interest in this aircraft.

Recent large-scale deliveries of Russian weapons to Egypt also did not result from high assessments of their use during the Syrian campaign. The contracts through which Cairo began to buy large consignments of weapons from Moscow were signed in 2014, even before the start of the Syrian operation by the Russian armed forces. Such an arms deal was the result of a change of power in Egypt, when the government of President Abdel Fatah al-Sisi decided to diversify its military ties due to fears of a decrease in the volume of military cooperation with the United States and European countries, after a military takeover in Egypt in 2013. This allowed Moscow to significantly increase its arms exports by supplying Egypt with MiG-29 and Su-35 fighters, Ka-52 attack helicopters, S-300 anti-aircraft missile systems, T-90 tanks, and so on. At the same time, Russian military equipment was purchased by Egypt in parallel with Western equipment.

In addition to Egypt, Algeria is a major importer of Russian military equipment in the Middle East. In particular, in 2019 at the MAKS-2019 exhibition, Algeria signed a contract for the purchase of 16 Su-30MKI (A) fighters and 14 MiG-29M / M2 fighters from Russia. These aircraft supplemented the country’s fleet, which already had these types of fighters. In addition, Terminator tank support combat vehicles, T-90 tanks and other equipment were supplied to Algeria.

Among the operators of Russian military equipment, Iraq should also be noted, which, after being subjected to aggression by the Islamic State, has noticeably intensified its military-technical cooperation with Russia. Since 2014, Moscow has supplied Baghdad with Su-25 attack aircraft, Mi-28NE attack helicopters, T-90 tanks and BMP-3 infantry fighting vehicles.

At the same time, it is too early to talk about the resumption of Russian arms exports to Iran. Tehran needs modern offensive models such as Su-30 fighters, but Moscow would not want to spoil relations with the Gulf countries and Israel and will probably refrain from supplying Iran with such equipment.

Thus, on the whole, Russia’s prospects in the Middle East arms market will depend on the ability of the Russian military industry to master the production of the latest models of military equipment and begin delivering it to the Russian armed forces. Only then will export orders for this equipment be possible. At the same time, as in the case of Egypt or Algeria, there is still the possibility of supplying older types of weapons for those states that will try to diversify their ties in the field of military-technical cooperation.