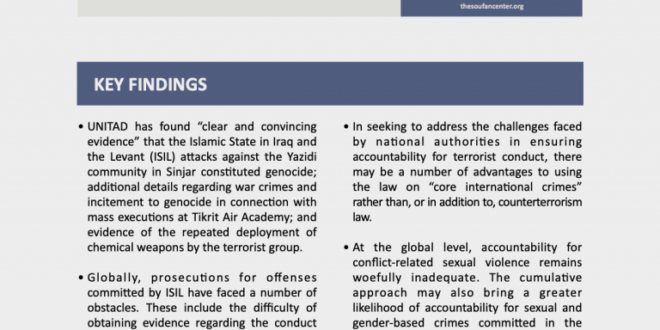 In his final briefing to the United Nations Security Council in May 2021, the Special Adviser and Head of the United Nations Investigative Team to Promote Accountability for Crimes Committed by Da’esh/ISIL (UNITAD), Karim A.A. Khan QC, highlighted their finding of “clear and convincing evidence” that ISIL attacks against the Yazidi community in Sinjar constituted genocide; additional details regarding war crimes and incitement to genocide in connection with mass executions at Tikrit Air Academy; and evidence of the repeated deployment of chemical weapons by the terrorist group. Much remains to be done to turn these assertions by investigators into convictions, following fair trial, of those responsible. But these are undoubtedly significant developments for accountability.

Post Views: 304
Previous Terrorism and Counterterrorism in Southeast Asia: Emerging Trends and Dynamics
Next A Way Forward With Iran? Options for Crafting a U.S. Strategy