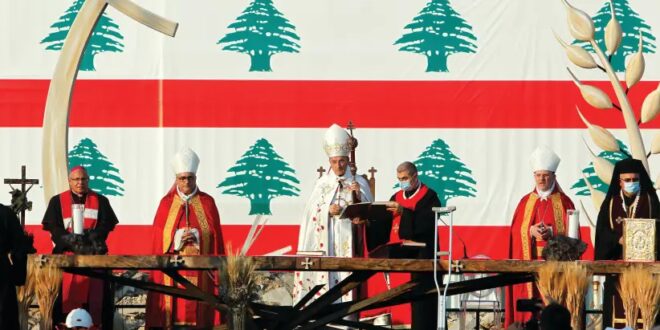 Can Lebanon be cured by Hezbollah’s crisis?

With Lebanon falling apart after decades of Shi’ite domineering, the rest of Lebanon is smelling weakness yet again.

Our future is as the Suez [Canal] of banking” a proud Lebanese finance minister Pierre Edde once told The New York Times.

It was winter 1965, and the country that was still celebrated as the Switzerland of the Middle East was brimming with tourists who packed its ski resorts, gourmet restaurants, glitzy casinos and luxury hotels.

A hundred different banks operated in that gilded Lebanon, including powerful American, Swiss and French firms. Studded with 64 nightclubs, licentious Beirut was a conservative Arab world’s Las Vegas, Chicago and New York, an electrifying metropolis where big money was deposited, lent and spent the way it now is in Tel Aviv and Dubai.

That was then. Now the Land of the Cedars is the Arab Atlantis, drowned by political decay, economic disaster and national despair.

This is the backdrop against which Lebanese villagers last week blocked Hezbollah terrorists who arrived with a rocket-launching truck in Chouya, a Druze town 18 km. northeast of Metulla. By day’s end, an eye-rolling Hassan Nasrallah canted: “If we could target the selected area from our homes, we would have, but we wanted to target a specific area in Israel.”

It takes no Napoleon to figure that the same ranging could have been done from a variety of Shi’ite towns, and it takes no Machiavelli to realize that in firing from a Druze village Nasrallah was hoping to make Israel’s retaliation hit someone else’s flock.

That is how things work in Lebanon, a country where clan, sect and tribe outweigh society, nation and state, so much so that the lira has become the paper money of a government that fails to supply electricity, fuel and bread, not to mention jobs.

Experts now wonder where the Druze response might lead. While important in the short term, in the long run it doesn’t matter because Lebanon’s salvation lies not in its sectarian structure’s rearrangement, but in its disappearance.

LEBANON’S DRUZE have a history of sectarian duels harking back to 1860, when this mountainous population slaughtered Maronite Christians, a feud that re-erupted in 1983 when Druze forces overran dozens of Maronite villages and killed some 1,500 Christians.

Now, with Lebanon falling apart after decades of Shi’ite domineering, the rest of Lebanon is smelling weakness yet again.

That is what made those Druze villagers confront Nasrallah’s gunners, and that is what made Maronite Patriarch Bechara Boutros al-Rahi call last Sunday for the transfer of southern Lebanon to the Lebanese Army’s command “and to prevent the launching of missiles from Lebanese territory.”

It takes guts to talk this way in Lebanon, even more guts than the patriarch displayed in his previous calls on Hezbollah to join his community in declaring Lebanon “neutral,” an idea that to Nasrallah is about as agreeable as gun control is to the National Rifle Association.

Clearly, the spiritual leader of the minority that once dominated Lebanon voices widespread feelings that Lebanon’s economic demise, financial meltdown and political paralysis are the fault of Nasrallah and his Iranian operators.
Judging by the way Lebanon has been run in recent generations, what will now begin to gather is a political siege by the other communities in the hope of suppressing the Shi’ite domination, lest it become the hegemony Nasrallah has in mind.

The pressure on Nasrallah is therefore set to grow and generate Lebanese politics’ typical mixture of negotiation, paralysis, and violence. It may ultimately diminish Shi’ite clout, but it won’t save Lebanon, which will continue to be haunted by the modern Arab tragedy’s three ghosts: Imperialism, tribalism, and fundamentalism.

LEBANON HAS been a battleground for other people’s wars since 1958, when its president, Camille Chamoun, invited an American invasion, fearing his country’s takeover by the newly formed Arab-Egyptian union.

Lebanon’s subsequent takeover by Syria, for which Lebanon was part of Greater Syria, later made way for Lebanon’s encounter with Iran, for which it is part of the Islamist belt the ayatollahs are out to stretch across the Middle East.
The reason all this could happen to Lebanon is the inherent disunity of a confederation of tribes and faiths that foreign powers so easily pit against each other.

The current political system parcels the legislature among 11 odd religious groups, granting each a fixed number of lawmakers. Voters can only elect candidates within this preset structure, while the president is always a Christian, the prime minister is always Sunni, and the speaker of parliament is always Shi’ite.

It is a political cartel that discourages merit and enshrines the tribalism that makes sectarian leadership pass from father to son, as it did with the Sunni Hariris, the Druze Jumblatts and the Christian Gemayels, Chamouns and Frangiehs. Lebanon thus became a compilation of princedoms that live in mutual mistrust, do not add up to a nation and fail to function as a state.

To stand on their feet, the Lebanese must shed this system and let any voter elect any citizen for any office. Only then, when it becomes a true state of all its citizens, will Lebanon be able to start the long march to nationhood, to the restoration of its lost prosperity and to the retrieval of the Atlantis that its leaders have led undersea.