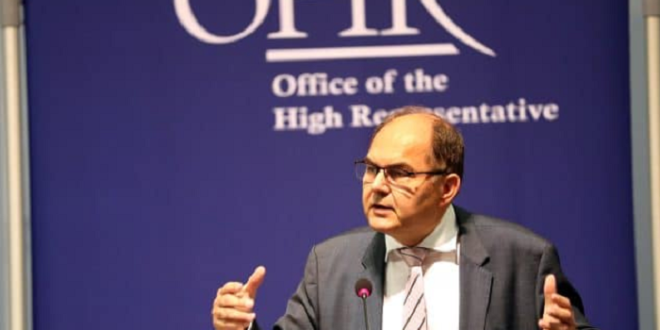 Christian Schmidt will need his wits about him – and the firm backing of Germany, the EU and US – if he is to avert a dangerous escalation in Bosnia.

Bosnia’s new international High Representative, German Christian Schmidt, touched down at the beginning of August, but he will have scant opportunity to enjoy the dog days of the Bosnian summer.

Of his predecessors, perhaps only the first High Rep, Sweden’s Carl Bildt, faced such a tough task in ensuring civilian implementation of the Dayton peace accord and protecting the territorial integrity of Bosnia and Herzegovina.

Some 26 years and seven High Representatives later, many of the improvements made in the first few years after Bosnia’s 1992-95 war have been reversed.

Bosnia, in many ways, appears to have gone full circle, epitomised by the parting decision of Schmidt’s immediate predecessor, Austrian Valentin Inzko, to impose a law forbidding genocide denial.

The move prompted Bosnian Serb parties – partial to questioning whether the 1995 Srebrenica massacre of 8,000 Muslim men and boys constituted genocide or even happened at all – to walk out of all state institutions, threatening the integrity of Bosnia’s entire political and legal system.

In his first official press conference on August 4, Schmidt ticked many of the right boxes.

This senior member of the German centre-right Christian Social Union, CSU, who has held several senior positions in the German government and parliament, said he was ready to use the strong executive powers at the disposal of the Office of the High Representative, OHR. These include the power to dismiss local officials and impose laws and bylaws in protection of Bosnian territorial integrity.

Yet he also indicated he was willing to meet informally with Bosnian Serb officials who have questioned his legitimacy and are boycotting state institutions.

Schmidt will need such flexibility, but firmness too, and above all the wisdom to know when to use which in what seems like his very own Mission Impossible.

Inzko’s parting gift
Schmidt has inherited a country rendered dysfunctional and deeply divided by its populist, nationalist and often corrupt politicians, where most intellectuals and media outlets have joined one or other side in this ethno-political fracas, and whose citizens regularly vote with their feet – leaving Bosnia for good and seeking better lives elsewhere.

Today, Bosnia’s political leaders disagree over its past, present and future; their zero-sum games block the work of most of the state, entity, cantonal and municipal institutions and deprive the population of minimal public services and living conditions.

This general decline has been facilitated over the past decade by the steadily weakening presence of the European Union and United States in the Balkans, creating space for the revival of local nationalist ideas and the strengthening of Russian, Chinese, Turkish and other foreign influences.

The power of the OHR itself has been undermined by a lack of Western resolve and repeated challenges from Russia. Yet the OHR itself bears much of the blame, having squandered its image of impartial arbiter and emerging as a political player in its own right.

Schmidt’s tough task got a whole lot tougher by Inzko, who officially resigned on May 27 but remained on the job long enough to impose the law on genocide denial on July 23.

The law foresees considerable penalties for persons convicted of denying genocide committed during World War Two or the 1992-95 Bosnian war, as well as for glorifying war criminals.

The legal basis and justification for such a law in Bosnia is clear. What can be questioned is the wisdom of such a step, the first time Inzko had used his executive powers since a similarly controversial decision in 2011.

‘Last nail in the coffin’
Several experts argued that the question of genocide denial across the Balkans is one for local institutions and regional forums, not a foreign overseer. Some also question how much is the law implementable, given that it requires that intent to incite ethnic or racial violence be proved, something even more advanced judicial systems than Bosnia’s would struggle with.

Politically, Inzko’s decision was criticised as the perfect pretext for a new escalation of ethno-political tensions. It will “create chaos”, warned Milorad Dodik, leader of the ruling Bosnian Serb party, the Independent Alliance of Social Democrats, SNSD, and the Serb member of Bosnia’s tripartite presidency.

Describing the law as “the last nail in the coffin” of Bosnia and Herzegovina, Dodik said the predominately Serb entity of Republika Srpska had no other option but to press ahead with secession from Bosnia.

Inzko’s decision has, in effect, revived Dodik’s flagging fortunes. Losing political control and popularity in recent months, Dodik had appeared on the verge of losing power in Republika Srpska. Instead, it’s the Bosnian Serb opposition parties that are now on the back foot, forced into forming a joint political front with Dodik and the SNSD against Inzko’s intervention.

With the main Bosnian Croat HDZ party also critical, only Bosniak officials, intellectuals and media welcomed the law as better late than never. As with Dodik, it appears to have put wind in the sails of several Bosniak political leaders who had been under growing pressure of late.

For these and other reasons, a major part of the Western community in Bosnia opposed Inzko’s move, but he went ahead anyway, likely feeling ethically and morally obliged to deliver on a promise he first made several years ago.

Dodik and his chief backer, Russia, appear determined to use the opportunity to advance their agendas.

Bosnian political and legal system unravels
Three days after Inzko’s announcement, all Bosnian Serb parties agreed to withdraw their representatives from the state Presidency, the Council of Ministers and the state parliament. They also agreed to cease all communication and cooperation with the OHR, arguing that the new High Representative had been appointed illegally by sidestepping Russian opposition.

If implemented, some experts say these laws represent the start of Republika Srpska’s legal separation from Bosnia since they create a situation where the two entities apply conflicting legal regulations.

They also mark a major challenge to the authority of the High Representative and to the work and, indeed, the very existence of Bosnian state institutions.

Bosnian Serb sources say Dodik is already preparing “Phase Two” of his response, if and when anyone from Republika Srpska is arrested and prosecuted on the basis of Inzko’s law. Media reports say that as of August 5, state prosecutors had opened 22 cases concerning alleged genocide denial.

The sources say Dodik would push through at least three news laws, effectively declaring null and void state laws on the territory of Republika Srpska and forbidding the operation of state security bodies and judicial institutions inside the entity.

That’s only a step away from territorial separation and would force the US and EU to come clean about whether they are prepared to meet their international obligations stemming from the Dayton peace accord, i.e. blocking the breakup of Bosnia and imposing sanctions on Dodik.

Western words would have to be backed by NATO boots on the ground, beefing up the current 600-strong EUFOR peacekeeping force which, with so few soldiers, is incapable of mounting any serious military operations.

All eyes would turn to Belgrade and Moscow, which both back Dodik in his questioning of Schmidt’s legitimacy and opposition to Inzko’s law.

In the past, behind the scenes, Serbian President Aleksandar Vucic and Moscow have reined in Dodik, but this is no longer a given under the current circumstances.