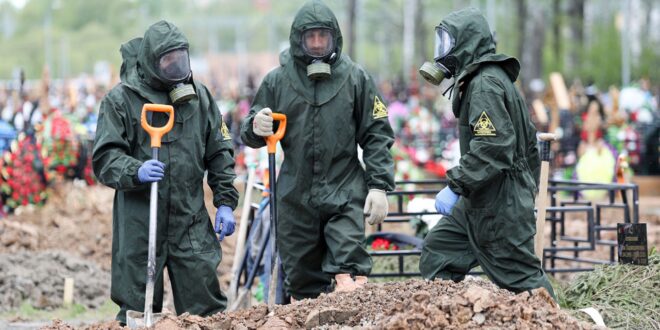 Russia on Friday recorded its highest daily coronavirus death toll for a second day running, even as the country’s outbreak epicenter Moscow lifted some restrictions.

Russia, the fourth worst-hit country in the world in terms of cases, has since mid-June been hit by a new wave of infections driven by the highly transmissible Delta variant.

The new figures bring Russia’s total fatalities from Covid-19 to 168,864 — the highest toll in Europe.

This figure, however, only takes into account deaths where the virus was established as the primary cause of death after an autopsy.

Under a broader definition for deaths linked to the coronavirus, statistics agency Rosstat said that Russia has seen more than 300,000 fatalities as of the end of June.

Authorities have faced a vaccine-skeptic population, with a poll by the independent Levada Center this week showing that 55% of Russians do not plan on getting inoculated.
Sluggish vaccination drive

Moscow as well as a host of regions have introduced mandatory vaccination measures to speed up the country’s inoculation drive, and President Vladimir Putin has repeatedly called on Russians to get vaccinated.

“It’s of course not good that the deaths are rising so quickly. I hope that people will get vaccinated faster,” Nikita, a bank worker in Moscow, told AFP.

While Russia has three homegrown vaccines available to the population, it does not distribute any of Western-made jabs.

As of Friday, just over 30 million of Russia’s around 146 million people had been fully vaccinated, according to the Gogov website, which tallies Covid data from the regions.

Moscow on Friday proceeded with easing virus restrictions, Mayor Sergei Sobyanin lifting a requirement for employers to keep at least 30% of employees working from home.

Sobyanin said on his website that the pandemic “continues to retreat” and the number of new hospitalizations in the capital has more than halved when compared to mid-June.

The measures announced Thursday include the suspension of public transport within Georgian cities and a ban on mass gatherings such as festivals, concerts and sporting events.

The restrictions will be in place from Aug. 14 until Sept. 4.

“The epidemic situation in the country is hard and we expect the new regulations to stabilize the spread of the infection in two weeks,” Georgia’s Health Minister Ekaterine Tikaradze said Friday.

Post Views: 202
Previous Taliban now controls all districts of Kabul — spokesman
Next US Plunders Syria by Smuggling Out 55 Vehicles Laden With Oil