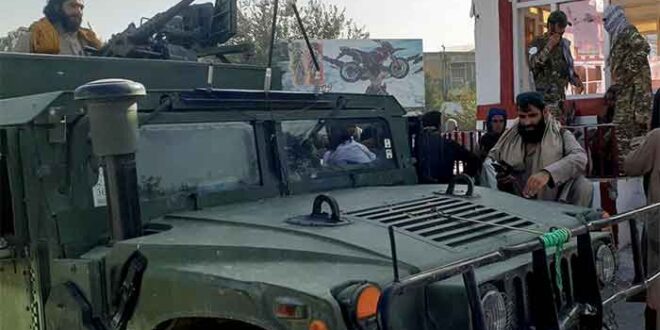 US sending 3,000 troops to Afghanistan as major cities fall to Taliban

The Pentagon announced Thursday that the US is sending 3,000 US soldiers and Marines into Afghanistan with the ostensible mission of securing US diplomatic facilities in Kabul and organizing the evacuation of American civilians. Britain is sending 600 soldiers for the same purpose. The US deployment of one Army and two Marine infantry battalions has been ordered as the lightning offensive of the Taliban—and the unmitigated rout of the US-backed Afghan security forces—has steadily tightened a noose around the Afghan capital.

The collapse of security forces loyal to the US puppet regime in Kabul accelerated exponentially on Thursday with the Associated Press reporting the Taliban’s conquest of Afghanistan’s second largest city, Kandahar, in the south. It came on the heels of the fall to the insurgency of Herat in the west.

Both cities have populations of approximately 600,000. Kandahar is the historic birthplace of the Taliban and constituted a major military center for both the US-led occupation and the Afghan regime. Herat, a predominantly Persian-speaking city, is the strategic gateway to Iran.

These defeats leave the government of President Ashraf Ghani in control of little outside of Kabul. He staged an emergency trip to Mazar-i-Sharif, a besieged city of half a million in the north, in an attempt to mobilize forces loyal to Afghan warlords responsible for some of the worst crimes of the country’s bloody civil war of the 1990s.

In southern Helmand province, the capital city of Lashkar Gah has nearly fallen to the insurgency, with the Taliban capturing the police headquarters Thursday. US warplanes have carried out airstrikes in an attempt to halt the Taliban advance, killing and wounding civilians in the city.

The heavily armed US troops being dispatched to Afghanistan will reportedly be deployed to Kabul’s international airport. Another Army brigade combat team of between 3,500 and 4,000 US troops is being sent to Kuwait to be on “standby” for a possible rapid deployment to Afghanistan.

With some 4,200 employees, the US Embassy in Kabul is one of the largest in the world. State Department spokesman Ned Price said Thursday that it would be drawn down to a “core diplomatic presence.”

US President Joe Biden had initially announced that all US troops would be withdrawn from Afghanistan by September 2021, in fulfillment of an agreement negotiated between the Trump administration and the Taliban in Doha in February 2020. While the overwhelming majority of US troops and military contractors have already left Afghanistan, the official day for the completion of the pull-out was moved up to August 31. Washington stated that it was leaving a force of 650 soldiers and Marines behind to guard the US Embassy and the Kabul airport.

The Pentagon has been providing armed support for the puppet regime’s security forces in the form of “over the horizon” airstrikes, including by B-52 strategic bombers, and drone attacks which have led to an escalation of civilian casualties and destruction in urban areas under siege by the Taliban.

US military and intelligence officials have been cited by the Washington Post as predicting that Kabul could fall to the Islamist insurgency in 30 to 90 days. Previously, these same sources had assumed that no provincial capitals would be taken before the fall. Their latest predictions were made, however, before the stunning defeats suffered by the Kabul regime over the last 48 hours.

There is every reason to believe that the new US deployments are aimed not merely at evacuating US personnel, but at forestalling, at least temporarily, the precipitous overrunning of Kabul by the Taliban and a humiliating spectacle like that in South Vietnam in 1975, with US personnel fleeing from the Saigon embassy rooftop. Whether they are merely the advance guard of another US military intervention in a war that has killed hundreds of thousands of Afghans remains to be seen.

The fall of Kandahar and Herat on Thursday evening followed that of Ghazni, a strategically important provincial capital that straddles the main highway linking the capital of Kabul to the country’s south. Qala-i-Naw, the capital of Badghis Province, in northwest Afghanistan, was also taken by the Taliban Thursday night, leaving it in control of 14 of the country’s 34 provincial capitals.

In one city and district after another, Afghan national security forces have either surrendered without a fight or merely stripped off their uniforms and melted into the general population. Taliban fighters captured the headquarters of the Afghan army corps in Kunduz in charge of the north of the country Wednesday without a struggle, taking control of large stocks of arms, Humvees and a military helicopter.

Washington is desperately trying to broker a deal with the Islamist movement. The perpetual US envoy to Afghanistan, Zalmay Khalilzad, formerly the representative of Unocal oil company’s interests in the country, was dispatched to Doha for talks that have included China, Russia, Pakistan, the European Union, Germany, the United Nations and the former Soviet republics of Uzbekistan and Tajikistan.

Also present was Abdullah Abdullah, chairman of Afghanistan’s High Council for National Reconciliation and President Ghani’s electoral rival in elections that he and his supporters claimed were rigged.

The talks in Doha reportedly produced an offer to the Taliban of a power-sharing agreement in exchange for a cease-fire. Iran declined to take part in the negotiations.

Pakistan’s Prime Minister Imran Khan told the media that any such deal hinged on the removal of US-backed Afghan President Ghani. Khan has bitterly denounced Washington, charging that the US only wants Pakistan to clean up the “mess” Washington has created in Afghanistan. He added that his government, faced with US alignment with India, has “options” in terms of its relations with China.

Washington’s determination to broker a “political settlement” in Afghanistan is driven not by concerns over terrorism or the rights of women, but rather US imperialism’s interests in preventing China, Russia or Iran from expanding their influence in the country.

It is to that end that US troops are once again being deployed in the longest war in American history.

Post Views: 232
Previous The U.S. Is Leaving Behind a ‘Nightmare’ in Afghanistan
Next Ending 20 years of occupation war in Afghanistan