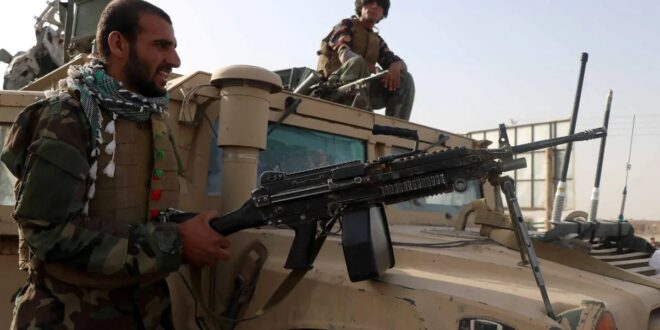 The Collapse of Afghanistan: Blame the Suits, Not the Boots

The lightning-quick advance by the Taliban rapidly overran Afghanistan and led to the absolute collapse of the Afghan army and security forces.

As the Taliban were posing for pictures inside the presidential palace, Afghan President Ashraf Ghani was fleeing the country to Uzbekistan even before the United States could withdraw its own diplomats. Crowds were rushing to the tarmac of Kabul airport trying to get out before the Taliban take over.

The United States had pumped between $80 and $89 billion into training and equipping the Afghan military and police. Nonetheless, they collapsed so utterly even before the withdrawal of the United States and its coalition was even complete.

It is a stunning and humiliating defeat for both the Afghan and U.S. governments.

But how did it happen?

The Handwriting Was on the Wall

Intelligence officials had estimated that the Taliban would threaten many provincial capitals and cities by the fall. But those estimates were woefully inaccurate as they swept aside the Afghan army and security forces with ease. In far too many cases, not even a shot was fired.

General Scott Miller, the last American commander of the coalition forces in Afghanistan, had pointed out that events taking place at the end of June were already hinting at the imminent collapse.

“What we’re seeing is the rapid loss of district centers,” Miller had said. That was a fundamental change in the Taliban’s hitherto strategy. The Taliban had previously exerted influence over rural areas without attempting to seize any larger population centers.

With the corpse of Afghanistan still warm, the finger-pointing in Washington has begun.

President Biden blamed the fall of the country squarely on the shoulders of former President Trump.

“I inherited a deal cut by my predecessor,” the president said. It left the Taliban “in the strongest position militarily since 2001 and imposed a May 1, 2021 deadline on U.S. forces.”

“Shortly before he left office, he also drew U.S. forces down to a bare minimum of 2,500,” President Biden added.

Former Secretary of State Mike Pompeo spoke to Fox News on Sunday and put the blame on the current administration.

“It looks like the Biden administration has just failed in its execution of its own plan,” Pompeo said.

Nevertheless, both military and political factors are to blame for the collapse. And the blame doesn’t lie on the Trump or Biden administration specifically but on the entire American strategy since Day One. This covers four presidential administrations.

An Ominous Beginning and an Incompetent Force

During the early days of the war, the Bush administration’s goals were to disrupt the training and planning of al-Qaeda’s operations, oust the terrorist organization from the country, and punish the Taliban for harboring them.

By March 2002 these goals had been completed. But the mission shifted from a strictly military operation to nation-building a land and people that have always been tribally oriented.

On the military side, the U.S. tried to construct Afghanistan in a mirror image of itself. It was one of the key points that the Obama administration tried to push by turning over the security of Afghanistan to the Afghans with the aim of getting the United States out of there.

Yet, despite the U.S. supplying the Afghans with state-of-the-art weapons, vehicles, and equipment, the Afghan army was still tied to the U.S. in terms of logistics, intelligence, and most importantly air support.

Since 2014, the U.S. had been increasingly turning over security to the Afghans. Nevertheless, the quality of Afghanistan’s military and security forces was low. Many would cut and run at the first sound of gunfire, desert, or, in many cases, fire on the American troops stationed there.

Therefore, they couldn’t be counted on to adequately defend their land, let alone conduct offensive operations against the Taliban. Further, the regular soldier was poorly supplied despite there being plentiful stocks, courtesy of the U.S.-led coalition.

The only unit worth its salt was the Afghan Commandos, the Special Forces unit that was trained, equipped, and advised by USSOCOM. They were ready, willing, and able to stand and fight. Unfortunately, their numbers were too small and they were overtasked with putting out fires all across the country.

They too began feeling the pinch of logistical nightmares. Recently, a Commando unit that was locked in a firefight with the Taliban ran out of ammunition and was forced to surrender. Because of who they were, the Taliban immediately slaughtered them in a brazen war crime that was caught on video.

The Bottom-up Approach Was Bungled

One of the programs the U.S. tried to implement was the bottom-up Village Stability Operations (VSO), with the stated purpose of empowering Afghans on the local level. Instead of American special operators conducting security operations for the local population, the local population would assume responsibility.

Yet, the Afghan government posted VSO troops far from their homes. Thus, they had little in common with the local villagers and little to no inclination to fight for them. Alas, the lessons of Vietnam were forgotten. In that war, Special Forces troops had allowed Montagnard tribesmen to move their families in far-flung and isolated A-Camps. After all, troops will fight harder if their families are right behind them.

The lack of faith in the national government, a constant in Afghan life, further undermined efforts at stability and central control. Tellingly, even the Taliban had allowed a large degree of autonomy at the local level.

But arguably the biggest reason for failure was the rampant corruption of the Afghan military and civilian leadership.

Supposedly, there were 300,000 Afghan troops on the books, but most military analysts believe that the number was substantially lower. Corrupt Afghan commanders wouldn’t report all casualties and desertions to pocket the salary of the “ghost soldiers.”

When the Taliban began attacking the district capitals, officials made side deals with the Taliban and the troops abandoned much of the equipment left by the U.S. without firing a shot.

The collapse was a failure of leadership. A failure of Afghan leaders who instilled no willingness to fight in the Afghan people. All of the M4s, Humvees, and aircraft in the world aren’t a substitute for that. It has to come from leadership.

In 2016, former U.S. Ambassador to Afghanistan Ryan Crocker provided the most damning testimony of this. Speaking to the special inspector general for the Afghan Reconstruction (SIGAR), he said that while U.S. and Afghan Special Forces can “clear an area, but the police can’t hold it, not because they’re out-gunned or out-manned. It’s because they are useless as a security force and they’re useless as a security force because they are corrupt down to the patrol level.”

Afghan leaders are more interested in competing for power than the security of their nation. One Taliban leader recently told Reuters that the collapse of the Aghan government began as soon as the U.S. began to withdraw from the country “as they didn’t have any ideology except fleecing the Americans.”

Despite the well-known corruption, the American government continued to pour trillions of dollars into the country with no stipulations to the Afghan government that it fixes the myriad of problems. That was an American failure at the highest level of both our political and military leadership.

It is no wonder that Afghan soldiers didn’t want to fight for that government.

A former Special Forces officer recently said that “this Afghan debacle is ON the suits. NOT the boots!!” Sadly, this is true.