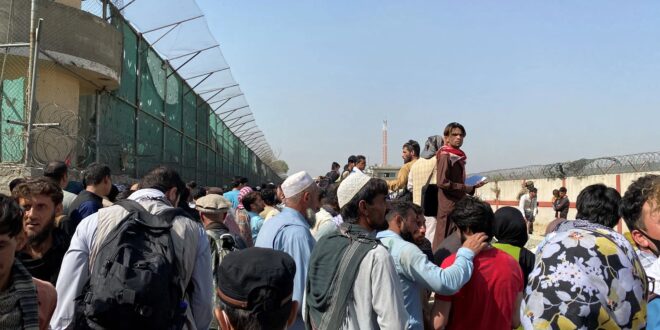 U.S. Turning Away Some Afghan Allies from Kabul Airport to Give Priority to American Citizens

U.S. troops on the ground in Kabul are turning away from the airport some Afghan collaborators and interpreters who supported America during its two decade occupation of the territory.

These personnel are being temporarily refused in order to give priority to U.S. citizens and green card holders, an anonymous State Department official told the New York Times Monday.

American veterans’ organizations working to expedite evacuations for Afghan allies who served in the war effort and some Afghans who have attempted to access the airport confirmed the official’s account.

It is not certain how many qualified Special Immigrant Visa recipients have been dismissed. Many of them shared with the Times that they had received emails from the United States encouraging them to go to the airport for emergency exit.

“Our overriding priority remains to put as many people as possible on departing planes as quickly as possible,” a State Department spokesman said. It remains unclear when exactly U.S. troops began turning away Afghans.

Amid reports that Taliban operatives have been going door to door, hunting down its former enemies, many Afghan allies are desperate to flee the country. After navigating Taliban checkpoints, already a treacherous endeavor, evacuees must stand by at the airport perimeter. The crowds lining the airport have produced a chaotic scene, with thousands of people pushing to secure passage, with some getting trampled and injured in the mob.

After making the perilous journey, an anonymous Afghan woman who worked for the United States Agency for International Development said American officials removed her family from the airport.

“We risked our lives,” she said.

President Biden said Sunday that “our first priority in Kabul is getting American citizens out of the country,” and then Afghan allies must also be rescued.

“We will welcome these Afghans, who helped us in the war effort over the last 20 years, to their new home in the United States of America,” Biden said. “Because that’s who we are. That’s what America is.”

While defense officials confirmed at briefings that the military has evacuated 37,000 people since August 14, when the Taliban conquered Kabul, thousands more American citizens and Afghan allies remain in Afghanistan’s interior.

Biden is crunched for time with the August 31 withdrawal deadline fast approaching and pressure is building on his administration to extend the deadline to allow the military to accommodate for those still left behind. However, a Taliban spokesman warned Monday the U.S. would face “consequences” for not adhering to the original promise to leave by month end.

“We’re focused on American citizens and L.P.R. right now,” the State Department official told the Times, referring to legal permanent residents of the United States. He said Afghans who were already inside the airport, including special visa recipients, were being processed for departure.

Beyond Afghan partners who cooperated with the U.S. military to keep the Taliban at bay for twenty years, reports have emerged that many American citizens have struggled to make it to the airport and have been effectively trapped in Afghanistan. On Saturday, the U.S. Embassy discouraged Americans from traveling to the Kabul airport over “potential security threats,” while a gunfight broke out Monday morning at the airport.

At a press conference Monday, White House press secretary Jen Psaki called it “irresponsible” to suggest that Americans are “stranded” in Afghanistan.

“First of all, I think it’s irresponsible to say Americans are stranded. They are not,” Psaki said. “We are committed to bringing Americans who want to come home, home,” mentioning that the U.S. is in communication with many Americans in Afghanistan to facilitate their evacuation.