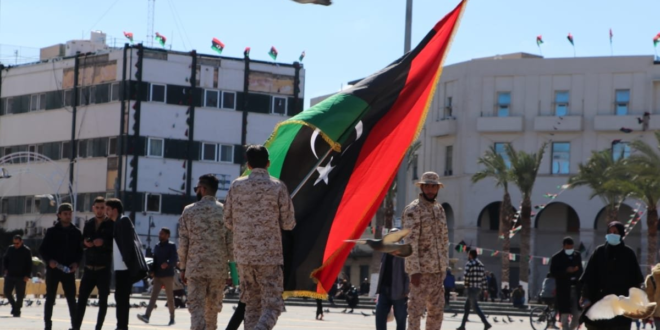 Israeli intelligence officials met privately this month with the son of Libya’s top warlord to discuss his 2021 presidential candidacy, a signal that Israel is suppo

rting his bid, a source familiar with the meeting told the Washington Free Beacon.

Saddam Haftar has been quietly seeking Western backing for his campaign, which is expected to pit him against Saif al-Islam Qaddafi, the son of former strongman Muammar Qaddafi. Haftar is seen as a proxy for his father Khalifa Haftar, a dual U.S.-Libyan citizen and commander of the Libyan National Army.

A victory by Haftar could lead to closer relations between Israel and Libya, which doesn’t recognize the Jewish state. In the past year, Morocco, Sudan, Bahrain, and the United Arab Emirates all agreed to normalize ties with Israel.

During the meeting with Israeli intelligence officials, which took place earlier this month, the younger Haftar discussed “the situation in the region” and “his aspiration for stability of his country,” as well as his professed support for “democracy in his country, law and order,” according to the source familiar with the meeting. “The Israelis are supporting him.”

The Israeli embassy did not respond to a request for comment. Israel’s intelligence agencies have long been believed to support Haftar’s father, but the Israeli government has not stated this publicly.

Libya’s general election is slated for Dec. 24, 2021, its first since 2014. Attempts to schedule the election in 2018 and 2019 were delayed due to the country’s civil war. Earlier this month, the Libyan parliament confirmed an interim government with a temporary prime minister and presidential council.

Israeli intelligence sources expect the election to be a battle between Haftar and Saif Al-Islam Qaddafi, according to a report in Israel Hayom. Qaddafi’s bid is allegedly backed by Vladimir Putin’s administration, which reportedly met with the candidate in Moscow in September, according to Italian newspaper Corriere della Sera. Qaddafi, who served as “de facto prime minister” in the waning days of his father’s regime, is on the lam from the International Criminal Court for crimes against humanity.

A spokesman for the State Department told the Free Beacon that the United States is not taking a position on the prospective Libyan candidates, but added that Qaddafi still remains on the U.S. sanctions list.

“While we are taking no position on candidates, we would note that Saif al-Islam Qadhafi is designated under U.N. and U.S. sanctions, and also remains subject to an outstanding arrest warrant issued by the International Criminal Court,” the spokesman said.

Haftar, a captain in the Libyan National Army, claims to hold a secular, pro-democratic vision for Libya, in line with his father. But he has also drawn criticism from the United Nations and Libyan activists for leading a battalion to allegedly raid nearly half-a-billion dollars from the Central Bank of Libya in 2017.

Haftar’s father, Khalifa Haftar, was a trusted former military leader under Muammar Qaddafi before defecting and becoming a CIA asset in the 1990s. He spent nearly 20 years living in northern Virginia and returned to Libya in 2011.

As leader of the Libyan National Army, the elder Haftar has enjoyed Western support for years. But these alliances were undercut after he launched a 2019 military siege against the United Nations-backed interim government in Tripoli.

The siege, however, didn’t appear to damage Haftar’s relationship with President Donald Trump, who spoke to the warlord by phone at the time and “recognized Field Marshal Haftar’s significant role in fighting terrorism and securing Libya’s oil resources,” according to a White House statement.