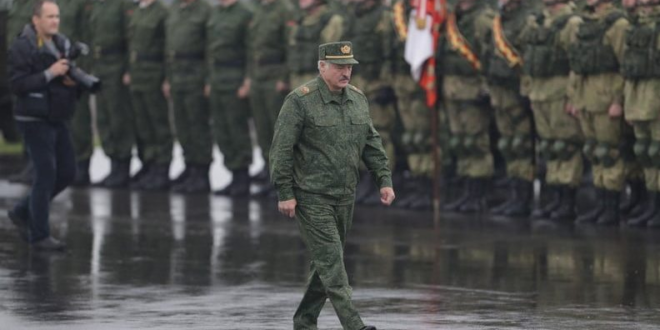 This year’s joint military exercise organised by Russia and Belarus on NATO’s eastern border is an unprecedented attempt to bully the West, in a new context with fresh tactics, argues Polish security expert Anna Maria Dyner.

The culminating stage of the Zapad 2021 joint Russian-Belarusian military exercise will take place between September 10-16, with a core part of the activity concentrated in western Belarus, near that country’s borders with Poland and the Baltic states.

The exercise, which will reportedly involve up to 200,000 soldiers and auxiliary staff, is meant to test Russia’s ability to conduct military operations on its western flank, but also the interoperability of the Russian and Belarusian armed forces.

However, it comes in the context of an already tense situation on Belarus’ borders with Poland and the Baltics, after weeks during which Aleksandr Lukashenko’s regime has been pushing migrants, primarily from the Middle East and Afghanistan, into the EU, partly in retaliation for sanctions Brussels imposed on it for a rigged presidential election in 2020 and a subsequent violent crackdown on demonstrators.

The Polish government, which last week introduced a 30-day state of emergency in the area along its border with Belarus, explicitly referred to the Zapad exercise as one of the reasons for its move.

“A military exercise of such amplitude, involving such a large number of soldiers, could be connected to numerous provocations,” Polish Prime Minister Mateusz Morawiecki told a press conference on September 6.

The Zapad 2021 exercise is indeed important, because of its size and timing in the context of Belarusian domestic politics and the migration crisis, explains security expert Anna Maria Dyner, a specialist on the Russian Federation and Belarus from the Polish Institute of International Affairs (PISM), a Polish governmental think tank.

However, the expert warns that spreading disinformation is also one of the techniques being honed during Zapad 2021, meaning Western actors, and the media in particular, should be cautious when reporting on the level of threat.

A regular exercise with a twist
In an interview with BIRN, Dyner explained that Zapad 2021 is part of a series of military exercises organised each year by Russia to test its capabilities for combat on various fronts – this time, the Western one. It’s also a periodic review of the interoperability of Russian and Belarusian armies, which has, of late, been taking place regularly.

In that sense, the expert says, the exercise is a routine one. However, she is quick to point out that there are several elements which make Zapad 2021 worthy of special attention.

For one, the Lukashenko regime is now more dependent on Moscow than ever before, meaning the military integration between the two countries, which Russia has been seeking and Belarus resisting, is now becoming fact.

“The partial isolation of the Belarusian regime – because of the falsification of last year’s elections and the crackdown – is now being used by Russia to deepen integration, including militarily,” Dyner explains. “Russia is now the main political and financial guarantor of the Lukashenko regime and it’s trying to use this situation to its advantage.”

“Four years ago, the Belarusians rather wanted to cooperate with NATO – they even gave a presentation about the Zapad exercise at the NATO headquarters in Brussels,” Dyner recalls. “Lukashenko was trying to avoid having a permanent Russian military presence on Belarusian territory. He was also trying to depict Belarus as a guarantor of regional stability, a neutral actor where, for example, talks between Russia and Ukraine could take place.”

After Belarus’ rigged 2020 presidential election and subsequent crackdown this all changed. Dyner points out that the scenario under which the Zapad 2021 exercise is taking place assumes an act of aggression on the part of NATO towards Russia and Belarus.

“We should now perceive the Belarusian army – maybe not as totally part of the Russian one – as definitely strongly integrated with the Russian Armed Forces. If there is a confrontation between Russia and NATO countries, there is no way we can assume Belarus’ neutrality anymore,” she warns.

Migrants in the middle
The migration crisis on Belarus’ borders with Poland and the Baltics further complicates matters.

Dyner considers that both Minsk and Moscow have instrumentalised migrants before, though not to the same extent. When it comes to Lukashenko’s use of migrant flows into Europe as leverage, the expert points to 2004, when the Belarusian leader was likely interested in getting EU funds for border infrastructure, and 2011-2012, when a “migrant threat” was used as part of Minsk’s retaliation for the EU response to the 2010 presidential election, also regarded as stolen.

The security services in both countries, Dyner claims, are playing a role in smuggling migrants, in part for economic benefits.

The scale this time, however, is bigger. And the timing, coinciding with the Zapad drill, means Russia has found it useful to integrate the migration crisis into the exercise and thus accentuate the sense of threat.

The expert thinks that fomenting the migrant crisis has been a win-win for Russia and Belarus.

“One of the main goals of Russia especially, in regards not only to Poland and the Baltics but also other Western countries, including the US, is to increase polarisation within societies,” Dyner argues. “When you use such controversial issues as migration, it’s easy to increase internal tensions, which then makes it difficult for authorities in those countries to make the right decision.”

“It’s very difficult, when confronted with the situation at the border, to reconcile the security dimension with the humanitarian one – this is why it’s so difficult for governments to make a decision that is acceptable to everyone in society,” she explains.

This time around, it appears both Poland and the Baltics, and the EU as a whole, have chosen to give precedence to security concerns.

Like the Baltics, Poland has been pushing back migrants trying to cross the border, and more recently declared a state of emergency there that prevents human rights activists and the media from monitoring how the rights of migrants are being respected on the ground. Human rights groups claim Poland is breaching international refugee rights and is putting the lives of migrants at risk with this approach.

According to Dyner, this approach could work to eventually get Belarus to stop the flow, as the regime never wanted to be stuck with migrants from all over the world on its territory in the first place, though she underlines it’s impossible to predict precisely what will ultimately happen.

“It was a test,” Dyner claims, referring to Russia and Belarus’ intention to cause a destabilising effect in the West by using migration. “They didn’t risk much. If it works, they would continue to use this tool. If it doesn’t, they don’t, but they don’t lose anything by trying it.”

The long-term impact on societies like the Polish one and the EU as a whole remain to be seen.

The Polish opposition is concerned that the current state of emergency, which can be prolonged beyond the original 30 days, could open space for the governing Law and Justice (PiS) to potentially use it later if displeased with election results at home. The EU is also playing a delicate balancing game, supporting a government it otherwise criticises for its authoritarian bent to use such extraordinary tools that erode the power of civil society and the media.

What’s important to remember, Dyner says, is that Russia is likely interested in having the West panic over Zapad. The expert points out that, in previous years, Moscow seemed intent on keeping the size of the military exercise quiet, while this year it has been boasting of deploying up to 200,000 soldiers and staff. Dyner says the number then spreads like wildfire through the international media, despite there being no proper way of verifying it.

“It’s extremely important to pay attention to what picture the Russians and Belarusians are trying to paint for us,” the expert warns.