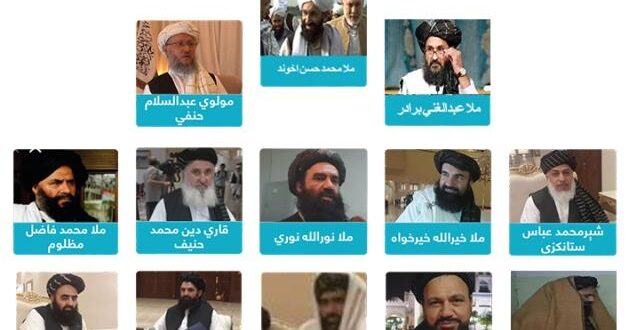 Who is who in Taliban’s caretaker cabinet?

The Taliban announced their caretaker cabinet 24 days after taking control of Kabul, but more than half of the cabinet members are on the UN sanction’s list.

The Taliban seized capital Kabul on August 15 hours before President Ghani fled the country and they are now in full control of the whole country.

The Taliban had said that they would form an inclusive government which would be acceptable to all Afghans and the international community. However, the group on Tuesday announced a temporary cabinet to fill the governance vacuum.

Acting ministers were introduced for 19 ministries while six of the posts have deputies.

Fasihuddin is the army chief of the new interim administration.

Former permanent representative of Afghanistan to the UN, Ghulam Mohammad Essaqzai in a tweet said that 17 members of the 33-member cabinet, including the caretaker prime minister, Mullah Hassan Akhund, two of his deputies, acting interior minister and acting defense minister were in the UNSC’s sanctions list.

Mullah Mohammad Hassan Akhund, is a resident of Kandahar province and he is one of the founders of the Taliban. He has an important position in the leadership council of the Taliban. It is said that Akhund is a close aide to the Taliban’s current leader, Mullah Habatullah in the last two decades.

Mullah Abdul GhaniBaradar born in 1968 in Dehrawood district of Uruzgan province. He is one of the Taliban’s founders. He received some Islamic education in Pakistani seminaries. He was the head of Taliban’s leadership council in Quetta after the fall of the Taliban regime. Baradar is Popalzai by tribe. He was a member of Hizb-i-Islami Afghanistan party under the leadership of Mohammad YounusKhalis during the Jihad against the soviet forces. He and three other people including Mullah Mohammad Omar decided to found Taliban in 1994.

Based on reports, Baradar had requested former president, Hamid Karzai for negotiations after the US-led invasion of Afghanistan in 2001.

Baradar was deputy defense minister in the former Taliban regime, but he was later appointed as deputy to Mullah Mohammad Omar after their regime collapsed. However, Baradar was arrested in Karachi city of Pakistan in 2010 and was imprisoned in Pakistan’s ISI detention facility until 2018, but he was released after that year on the request of US and was appointed as leader of Taliban’s political office in Qatar.

Baradar signed a deal with the US in February 2020 which facilitated the withdrawal of all foreign forces from Afghanistan.

Mulavi Abdul Salam Hanafi was born in Gardan village of Darzab district of Jawzjan province in 1969. He is an Uzbek and received his primary Islamic education in his own province and higher education in Pakistan’s Karachi city. He served as Taliban’s education director for Farah and later as acting education minister in the former regime of the group. Hanafi after the collapse of the Taliban regime was military in charge for Jawzjan province and later became member of the Taliban’s leadership council. He is now deputy prime minister in interim government.

Mullah Amir Khan Muttaqi is originally a resident of Zurmat district of Paktia province. But his family moved to Helmand province years ago. Muttaqi served as culture and information minister as well as education minister during the Taliban’s former regime.

Muttaqi also served as Cultural Affairs Commission of Taliban after the group was toppled in 2001.

Mullah KhairullahKhairkhwa is around 53 years old and he is originally from Kandahar province. He was a member of Taliban’s political office in Qatar and later became a member of the group’s negotiating team. He was a commander during the first Taliban regime, also served as interior minister as well as governor for Herat province until 2001.

Khairkhwa was arrested by Pakistani forces close to the Durand Line on February 16, 2002 and he was extradited to the US. He was imprisoned for 12 years in Guantanamo Bay Jail, and after his release, he was moved to Qatar. He is now acting information and culture minister in the new cabinet.

Qari Din Mohammad is a resident of Yaftal district of Badakhshan province. He received religious studies in Peshawar and had served as higher education and planning minister in the first Taliban regime, during which he also negotiated with the Northern Coalition in Turkmenistan.

He can fluently speak in Dari and Arabic and is a key member of the Taliban. He appeared in an academic seminar in a university in Japan and talked on behalf of Taliban.

He is now acting economy minister in the caretaker cabinet.

Mullah NoorullahNoori is around 53 years old and is a resident of Zabul province. He had served as governor for Balkh and Laghman provinces as well as military in charge for north during the first Taliban regime. After the fall of the Taliban regime in 2001, he surrendered to Gen. Abdul Rashid Dostum militias in November of that year and Dostum handed over him to the US who imprisoned him in Guantanamo bay on January 11, 2002.

Noori was imprisoned in Guantanamo Bay for around 13 years. He became a member of the Taliban’s negotiating team in Qatar and he is now acting border and tribal affairs minister.

Mullah Abdul LatifMansoor is a resident of Zurmat district of Paktia province. He is around 55 years old. He was a member of Taliban’s political office in Qatar and also a member of the group’s negotiating team. He was previously a member of Harakat-i-InqilabIslamiparty which was led by NasrullahMansoor.

Mansoor was agriculture minister in the first Taliban regime, he spent most of his life in Pakistan and graduated from Haqqania Madrasa. He is nephewof former Jihadi leader, NasrullahMansoor. He is now acting water and energy minister in the Taliban’s caretaker cabinet.

A resident of Uruzgan province, Umari is Hotak by tribe and he is the step-brother of Taliban founder Mullah Mohammad Umar. He is the member of the Taliban leadership council and served as member of the Taliban negotiating team in their first government. He also served as Preaching and Guidance Commission head and is currently offered the Public Works ministry slot in the Taliban

SerajuddinHaqqani is the Taliban deputy head and acting interior minister in the new cabinet. He is the son of JalaluddinHaqqani and head of the Haqqani Network. He is on the black list of US and has $10 million US bounty on his head.

“The Haqqani family is part of the Islamic Emirate and has no separate identity, in addition all IEA members were part of Doha Agreement with the US and there was no exceptional group. The Taliban members on the black list should have been removed from the black list — a demand still in place,” says the Taliban.

The IEA strongly rejected US and some other nations provoking interference in the internal matters of Afghanistan.

He earned fame in 2013 after the death of his father.

Abdul HaqWaseeq is the resident of Ghazni province and is 49-year-old. He completed religious education in Pakistan’s Zia-ul-Madares seminary. Waseeq was the assistant intelligence head during the Taliban first regime.

He was arrested in the Moqar district of Ghazni province in 2001 and taken to Guantanamo Prison. After 12 years in prison Waseeq was freed in a prisoner swap deal with the US. He was present in the US-Taliban negotiations and was a member of the Taliban delegation for talks with Afghan government. He is now appointed as general director for intelligence.

Mullah Mohammad Fazel,53, is the resident of Uruzgan province and had served as assistant defence minister, army chief and military commander during first Taliban regime. He surrendered to Gen Dostum’s militia back in 2002 after the defeat of Taliban regime and Dostom handed him over to the Americans who took him to Guantanamo Prison where he spent 13 years.

He served as the Taliban political office head in Qatar and member of the Taliban delegation for talks with Afghan government team. In current Taliban cabinet Fazel is appointed as assistant defence minister.

The son of PachaKhani, Stanikzai was born back in 1963 in the Baraki Barak district of Logar province. He completed higher education in India and served as military commander in the past. He is an important member of the Taliban Qatar office and headed the office affairs in the absence of Mullah Beradar.

Stanikzai could speak fluently in Pashto, Dari, English. He was part of the Mawlavi Mohammad Nabi jihadi party and currently lives in Dubai with his family. In the Taliban new cabinet he is given the foreign secretary slot.

The Taliban spokesperson was repeatedly contacted to get information about the remaining Taliban members, but failed.

Post Views: 466
Previous After Taliban Takeover, Can Afghanistan’s Economy Survive?
Next Are the Taliban descendants of Israel?