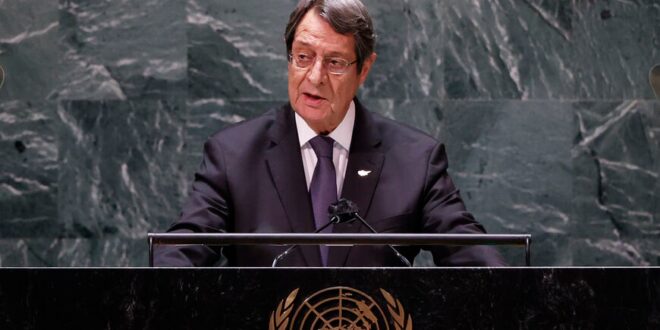 Cypriot President Nicos Anastasiades tore into Turkish President Recep Tayyip Erdogan at the UN summit Friday, criticizing Turkey’s policies not only in Cyprus, but in Iraq and Syria as well.

The UN General Assembly meeting is taking place in New York this week. Erdogan addressed the assembly on Tuesday.

Anastasiades used his speech to call out Erdogan directly. The Cypriot leader took issue with Erdogan’s comments on Turkey’s desire to have good relations with its neighbors. He specifically referenced Turkey’s control of parts of northeast Syria, attacks on Kurdish fighters in Iraq and dealings with post-civil war Libya to this end, insinuating that Turkey is not a friendly neighbor state to anyone.

Cyprus and Turkey have a difficult relationship. The Mediterranean island of Cyprus is divided into the Republic of Cyprus, which has a largely Greek Cypriot population, and the Turkish Republic of Northern Cyprus, which has a largely Turkish Cypriot population. Turkey invaded Cyprus in 1974 following a Greek military coup. Turkish troops are still present in Northern Cyprus, which Turkey is the only country to recognize. Both Greek and Turkish Cypriots suffered displacement as a result of the coup and subsequent invasion.

Anastasiades responded to Turkey’s proposals for solving the Cyprus issue at the summit. Turkey supports a two-state solution to the conflict. In April, Foreign Minister Mevlut Cavusoglu said any agreement should be “based on realities on the island,” a reference to the separate Turkish-backed state that now exists in Cyprus.

Anastasiades took particular issue with this remark, and described what he said were the “true realities on the ground” before the UN. He accused Turkey of “altering the demographic character of the island” due to the presence of Turkish settlers from mainland Turkey in Cyprus. He also referenced the roughly 40,000 Turkish troops stationed on the island.

Cyprus and Greece also oppose Turkey’s drilling plans in waters in the Eastern Mediterranean they and the European Union consider Greek and Cypriot maritime territory. Anastasiades spoke about this issue as well Friday.

For his part, Erdogan spent part of his speech criticizing anti-Muslim bigotry in the West. He also demanded a “stronger will” on the part of the international community on solving the Syrian crisis. Erdogan also mentioned the coronavirus-related assistance Turkey has sent to other countries during the pandemic and Turkey’s conflict with Kurdish groups, among other things.