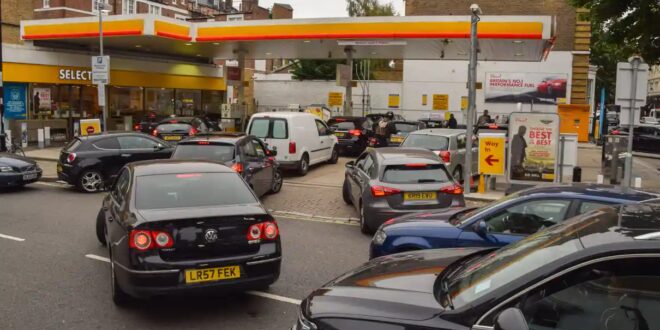 The Observer view on shortages and rationing

Boris Johnson can’t blame Covid for the hardship that lies ahead; deliberate choices by Tory ministers have also played their part

Queues at the pumps, shortages in supermarkets, energy companies going bust and chemotherapy being cancelled due to staff shortages. Welcome to Britain in 2021. Some of this disruption has clearly been caused by a pandemic exerting pressures on supply chains, workforces and healthcare systems all over the world. But Boris Johnson’s political choices have only acted to make Covid’s impact on the national infrastructure far worse.

The lines at petrol stations may be driven more by panic buying than real fuel shortages. But panic buying can become a self-fulfilling prophecy and it is a sign of a more anxious national mood as Britain heads into winter. Food prices are forecast to increase by more than 5% in the coming months. And the government is persisting with plans to cut financial support for low-paid parents by more than £1,000 a year this autumn. The Joseph Rowntree Foundation has estimated that the typical low-income family will be £1,750 a year worse off by next April as a result of all these changes. This is a huge amount to lose for parents already struggling to keep their children warm and well fed, the difference between just about getting by and entering into a miserable downward spiral of debt and poverty.

It is unthinkable that the government is about to let so many families already suffering from intense financial jeopardy end up in this situation. This situation is not just the product of a pandemic-related economic shock: it is the result of sustained government policy. A decade of tax credit cuts has seen many low-income families lose thousands of pounds a year even as Conservative chancellors have spent several billion a year on tax cuts that have disproportionately benefited more affluent households. The government has done too little in the face of longstanding warnings to tackle the fragility of the UK’s energy supply.

One of the reasons that relatively low food prices are so important for household budgets is because of the extortionate housing costs that swallow up renters’ salaries: tenants in the UK, who make up a growing proportion of households, pay the highest rents in Europe. Yet the government has done nothing to reverse the whittling away of the social housing stock that is needed to create more affordable rents: last year, it was depleted by almost 30,000 through sales and demolitions, far exceeding the number of new social homes built.

Brexit has also made things worse. As one of the public faces of the Vote Leave campaign, Johnson promised that a bilateral trade deal with the US would be the jewel in the post-Brexit British crown. The experts who warned that it could never make up for more than a small fraction of the volume of trade lost as a result of Brexit, and that it would never come to pass, have been proved right as all hopes of a quick deal evaporated when Johnson paid his first visit to the White House last week.

All the anticipated costs and frictions of Brexit have materialised, combining with CO₂ shortages to jam up the food supply chain. The end of free movement has generated a lorry driver shortage that has been made worse by the inefficiencies Brexit has imposed on road haulage: European drivers have far less flexibility to work deliveries within the UK into their cross-continent routes. The government’s proposed solution – a temporary relaxation in visa rules – is pitched too incrementally: will European drivers really opt for this given the added inefficiencies of UK work, the short-term nature of the relaxation, and the experience many had of being trapped in their cabs in queues on British roads due to Covid-related disruption last Christmas?

It is not just the food supply chain that Brexit is affecting: there is also a growing crisis in the care sector, with a shortage of care workers both as a result of the pandemic and of post-Brexit immigration rules. This is leaving too many people with disabilities in the intolerable position of struggling to arrange not just the life-enhancing, but in some cases the life-critical care they need. And in the NHS, a lack of workforce planning and a decade of underinvestment have meant that the long-term effect of Covid will be even more detrimental. One hospital in Nottingham announced that staff shortages are forcing it to ration chemotherapy for cancer patients, while a new study out last week predicted that it could take more than a decade to clear the post-pandemic cancer treatment backlog.

A pandemic may have made things worse, but what is happening in energy, to food and to healthcare shows that years of neglect of Britain’s housing, health and essential infrastructure, combined with the political right’s almost fanatical obsession with Brexit, will come at a very high cost for families. The government may not yet be facing the political consequences, but the question for Keir Starmer as the Labour party holds its annual conference this weekend is whether he can articulate the hardships in store. Voters deserve an opposition capable of illustrating that it is a series of quite deliberate political choices that will catapult hundreds of thousands of people into poverty, generate rising homelessness as a result of tenants not being able to pay their rent and lead to growing numbers having their medical treatment cancelled. It is the Conservative government that is to blame for the full extent of the cost-of-living crisis and the precarious state of the NHS and the care sector. But Starmer’s Labour party must play its role in holding Johnson to account.