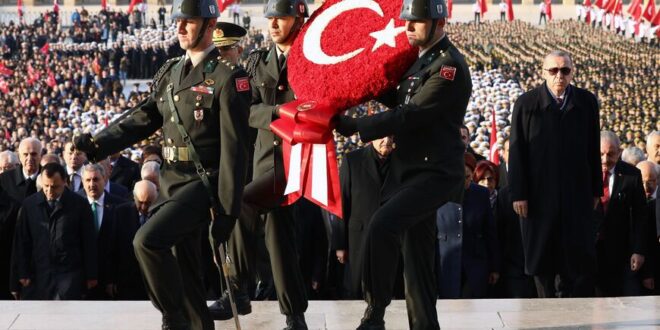 Turkey was rattled last week by reports that five generals serving on Syria-related missions were seeking to resign, including the head of a command center in charge of all Turkish operations in Syria and two others at the helm of commando forces that are deployed in Syria on a rotational basis.

An unnamed Defense Ministry official told the state-run Anatolia news agency that only two generals had asked to retire “due to health and familial reasons” and their requests had been granted. “The presentation of the two generals’ retirement requests as something extraordinary [and a sign of] problems within the Turkish Armed Forces is seen as an effort to create perceptions aimed at discrediting the Turkish Armed Forces,” the official was quoted as saying.

Still, abrupt retirement requests by meritorious generals with ample operational experience and bright careers ahead of them are highly unusual in the deep-rooted traditions of the Turkish military, especially in the middle of critical missions. Early retirement requests by such figures can be read as a gesture of disagreement with their superiors or disapproval of government policies.

In the context of Turkey’s military intervention in Syria, the following reasons seem likely:

Indeed, the situation in Idlib has markedly escalated in recent weeks. Developments in the region suggest that it is becoming harder for thousands of Turkish troops deployed at more than 30 military outposts in Idlib to keep their positions. Intensified air raids by Russian and Syrian warplanes as well as ongoing Syrian military reinforcements around Saraqib have made it almost impossible for Turkish military outposts in the area to operate properly, secure logistical supplies, evacuate sick or wounded soldiers or patrol critical routes.

Most recently, three Turkish soldiers were killed Sept. 11 when an anti-tank guided missile hit their armored vehicle on a road between Idlib city and Binnish.

Turkish-Russian accords on Idlib have thus far allowed Turkey to maintain its military presence in the region. It has effectively served as a barrier to large-scale offensives by Syrian government forces to recapture the province. Turkish President Recep Tayyip Erdogan is scheduled to meet with his Russian counterpart Vladimir Putin in Sochi Sept. 29, a summit that might prove a turning point for Turkey in Syria with serious implications in domestic politics. This time, Russia appears keen on securing the evacuation of six Turkish military outposts in the area between Idlib and Saraqib to the east, clearing the way for Syrian government forces to march on Idlib from the east and the northeast and eventually recapture it. Such a move would mean that Moscow no longer sees a need to collaborate with Turkey in Idlib and limit the Turkish military presence to the north of Idlib. Such a development is likely to trigger a fresh refugee flow to and across the Turkish border and stoke anti-refugee sentiments in Turkey atop the recent public outcry over the influx of Afghans fleeing the Taliban.

Controversy over the Turkish military’s personnel management has been fanned further by reports about a record number of colonels being forced into early retirement — around 200 at the Supreme Military Council in August and about 600 at last year’s council.

Overstaffing at the rank of colonel has long been an issue for the Defense Ministry, but the measures taken have resulted in highly unfair procedures. The service term of military officers was limited to 28 years in 2016 and a promotion to general now requires a decision by the Supreme Military Council, regardless of age and length of service. Those who are not promoted could be sent into retirement as early as their 40s and despite their involuntary retirements, would have to wait until the age of 50 to receive pensions. Hundreds of colonels have reportedly been affected by the policy, left without financial means and social security until the age of 50 after at least 20 years of military service. Their numbers will grow each year unless this unfair procedure is rectified.

By sending young colonels into retirement, the Turkish military is losing officers at their most productive age even as it seems to struggle to find senior-level officers for critical posts. Instead, perhaps the ministry should focus on legal amendments that keep officers longer in lower ranks and prevent them from climbing too quickly through automatic promotions.

Meanwhile, the changes in the military’s long-established assignment and promotion system have fueled questions of whether Erdogan’s government is conducting covert purges to create room for loyalists and the Turkish Armed Forces are on the way to becoming partisan.

The military had already seen massive purges and shakeups after the failed coup attempt in July 2016. Controversial legal amendments removed parliamentary oversight and other checks and balances in the military-government relationship, establishing absolute presidential control. And since Erdogan assumed sweeping executive powers in 2018, the military has become increasingly politicized and embroiled in daily political bickering.

Erdogan’s government has repeatedly shown that it seeks unquestioned control of any changes in the military rather than an inclusive process of reform that is based on compromise and open to public debate, including the views of the opposition. As a result, the military continues to be drawn into the clamor of daily politics. Ultimately, the controversies are not only harming morale and motivation in the military, but also eroding its operational effectiveness.