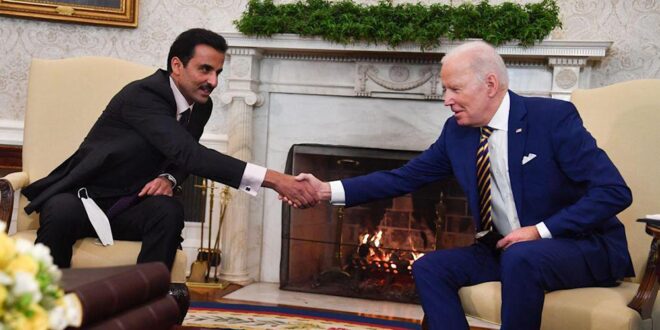 President Joe Biden said on Monday (January 31) he plans to designate Qatar as a major non-NATO ally, granting a special status to a key ally in the Middle East.

Biden made the announcement as he met Qatar’s emir, Sheikh Tamim bin Hamad al-Thani, in the Oval Office. The emir told reporters that he would discuss regional security with Biden as well as push for equal rights for the Palestinian people.

Boeing Co secured a launch order from Qatar Airways for a new freighter version of its 777X passenger jet and a provisional order for 737 MAX jets in a Washington ceremony on Monday coinciding with a visit by the Gulf state’s ruling emir.

Reuters reported last week that the U.S. planemaker was in advanced negotiations with the Gulf carrier for around 34 of the planned twin-engined freighters in a deal provisionally estimated to be worth $14 billion at list prices.

Qatar is also bridging to the new cargo version of the upgraded 777X with a handful of extra current-generation 777 freighters.

Qatar has told the European Union the bloc would need to restrict the resale of gas outside the EU so major suppliers can provide gas in case of a Russia-Ukraine conflict and prevent a short-term crisis, a person briefed on the talks said.

The Gulf Arab state says it is also necessary to resolve a long-running EU probe into Qatar’s long-term gas contracts, for the EU to be less dependent on spot sales and more on long-term contracts to boost its energy security, the person added.

The discussions between the EU and major suppliers go to the core of EU’s gas market liberalisation.

Post Views: 70
Previous US-Backed Forces in Syria Raise Alarm Over Islamic State Resurgence
Next UK PM to visit Ukraine in show of support, urges Russia to step back from conflict