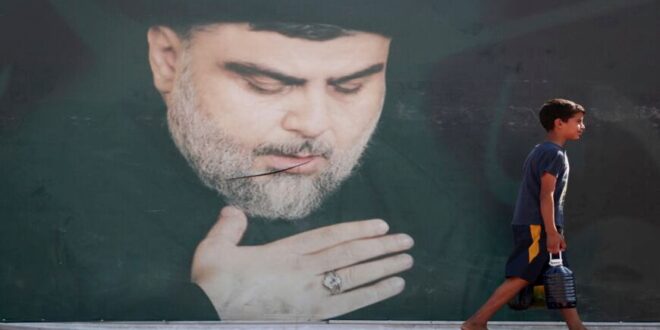 The Coordination Framework, comprised of several Shiite parties is seeking a national unity coalition modeled on previous governments, while Sadr whose bloc won the majority of seats seeks majority government.

The days ahead will tell us if Iraq’s difficult political process is to chart a new path by allowing the formation of a majority government, as promised by the electoral winners of the October parliamentary election, or continues its 17-year tradition of “national unity” governments that have proven ineffective, unmanageable and unpopular with the people.

The Sadrists, with 73 seats, scored a major victory in the Iraqi parliament’s opening session on Jan. 9. Their quiet, behind-the-scenes work to form an ethno-sectarian alliance with Kurdish and Sunni parties bore fruit when the alliance easily elected its Sunni choice for the speakership of the parliament, Mohammed al-Halbusi.

A potentially second major victory was scored during the same session by registering the Sadrists as the biggest bloc with 90 seats after they drew to their bloc an additional 17 members of parliament. This effectively means that once the president of the republic is elected, most likely during parliament’s second session on Feb. 7, he will have 15 days to charge Sadrists with the task of forming the new government, giving them 30 days to achieve this task.

But because of its highly fractious politics, all is not certain in Iraq.

Still, Sadrists have the best chance to maintain their position as the biggest bloc again if a new parliamentary session is needed to settle the issue.

The Coordination Framework (CF), a loose Shiite alliance, is calling for a national unity government and a delay in the formation of the majority government in the hope of pressuring Sadrists into accepting a deal allowing the CF’s various blocs to join the government. The CF has been using these time-gaining tactics in various contexts since the initial results of the election were released in mid-October. The tactics failed to change Sadrists’ insistence on a majority government. Now with the Sadrists in a better-placed position after forming their grand ethno-sectarian alliance and electing the parliamentary speaker and his two deputies, it is highly unlikely they will accommodate the CF.

Neither has Iranian intervention on behalf of the CF changed Muqtada al-Sadr’s determination to go it alone in government formation without other Shiite partners if necessary. The sticking point seems to be the Sadrists’ unwavering rejection to include in the next government the CF’s biggest bloc, former Prime Minister Nouri al-Maliki’s State of Law Coalition, with 33 seats. The several visits to Najaf and Baghdad by Iran’s commander of the Quds Force Ismael Qani could neither broker a deal to bring all Shiite Islamist parties together in a grand alliance nor convince Maliki to go into the opposition.

The new fact is that the CF is still holding together after initial indications that some of its blocs, particularly Hadi al-Amiri’s Fatah Alliance with 17 seats, might join the majority government, basically breaking the CF whose main bargaining chip is to stick together to be able to pressure the Sadrists. In his latest TV appearance, Sadr said that Amiri stepped back from an earlier promise to join the government. With the CF still holding together, the goal seems to protect Maliki from future prosecution if he goes to the opposition. A source told Al-Monitor that the CF, with Iran’s help, has been trying, unsuccessfully so far, to obtain guarantees from Sadr that Maliki and other CF members would not be pursued for past alleged misdeeds.

Sadr’s ethno-sectarian alliance, on the other hand, projects confidence. Prior to a three-way meeting in Najaf with Sadr, the Kurdistan Regional Government’s President Nechirvan Barazani and parliament speaker Halbusi, the latter tweeted that “the time of outside intervention is over,” taking a jab at Iran’s influencing effort. It is unusual for a high-level Sunni official such as Halbusi to criticize Iran in such a thinly veiled manner. Sadr’s tweet following the meeting was even more straightforward in setting “the demarcation line” between his alliance and the CF, stating, “We are still pursuing a national majority government and welcome a dialogue with the national opposition.” By calling for a dialogue with “the opposition,” Sadr seems to have closed the door on further negotiations with the CF about government formation, basically forcing it into parliamentary opposition. Seeing their hopes of being represented in the government dashed, some CF members may jump ship and join the Sadrist-dominated government. A source told Al-Monitor that 25 parliament members from Maliki’s bloc expressed their desire to leave the bloc and join the government.

Barring the unexpected, the path seems clear to a majority government. A possible challenge the CF can throw in the way is to break the quorum for the Feb. 7 parliamentary session to elect the president of the republic. The Iraqi Constitution requires the presence of at least two-thirds of all parliament members to conduct the first round of this election. The CF does not have the needed quorum-breaking third (109 parliament members), but if it draws enough parliament members from independents and smaller blocs, it may be able to pull it off. This is unlikely because many of the independents and small blocs hail from or support the October 2019 protest movement, which greatly distrusts the CF and accuses its armed wing of targeting protesters.