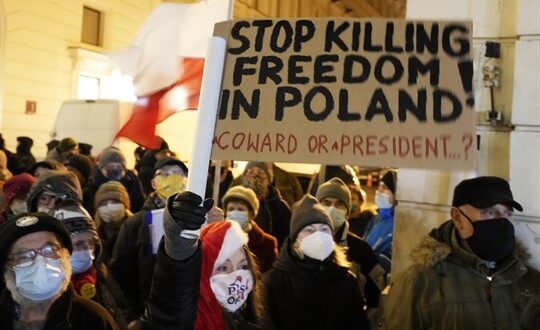 Poland’s Democratic Erosion Is as Worrying as Its Border Crisis

In September 2021, the Polish government declared a state of emergency along its border with Belarus, which is also the European Union’s eastern frontier, in response to a large influx of migrants from countries including Iraq, Syria and Afghanistan. The route and timing of the migrants’ journey into Europe was not random: They were assisted by the Belarusian authorities, led by the country’s authoritarian President Alexander Lukashenko, who has ruled Belarus since 1994. Warsaw went on to accuse Minsk of engaging in “hybrid warfare” backed by Russia.

Both the humanitarian crisis on Poland’s border, where migrants were left stranded in the freezing cold throughout the winter, and the wider geopolitical context have captured the international community’s attention. With tensions between NATO and Russia already high over Ukraine, the Polish-Belarusian border could become another hotspot in the conflict between Russian President Vladimir Putin and the West. Lukashenko just used a purported military buildup at the border by Poland and the Baltic states as a pretext for upcoming joint military exercises with Russia that many observers believe could be a cover for prepositioning more Russian troops for a potential invasion of Ukraine.