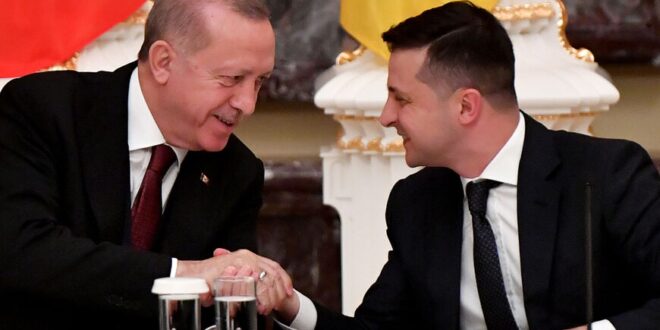 Turkish-Ukrainian trade is on the rise and Ukraine recently used Turkish combat drones against Russia-backed forces.

“We will sign a New Generation Free Trade Agreement with Ukraine as the fruit of more than a decade of negotiations,” Mehmet Mus told reporters, the official Anadolu Agency reported.

Turkish President Recep Tayyip Erdogan will visit the Ukrainian capital tomorrow for the 10th High-Level Strategic Council with Ukraine. The two states are targeting $10 billion in bilateral trade volume. In 2021, bilateral trade jumped 59% in value to $7.4 billion, according to the agency.

Erdogan’s visit comes at a crucial time for Ukraine. Russia has been amassing its troops on the eastern border for weeks. Some in Ukraine fear an invasion may be imminent, though the Kremlin denies it. Russia is opposed to Ukraine joining the North Atlantic Treaty Organization (NATO). Negotiations are ongoing, but the United States has so far refused to back down on Ukraine eventually joining NATO.

Turkey and Ukraine have had good relations for some time. Turkey sold Ukraine its Bayraktar TBT 2 combat drone in 2018. Last year, Ukraine used the drone for the first time in its war with Russian-backed separatists in the east. A Ukrainian commander recently told Al-Monitor that the Turkish drones have boosted the military’s confidence amid the ongoing conflict.

Ukrainian President Volodymyr Zelensky has also been urging Ukrainians to vacation in Turkey. Turkey was the top foreign investor in Ukraine in 2020, investing $400 million there, according to the Kyiv Post.

Amid the recent tensions, Turkish officials have worked to reassure Russia, for example reaffirming Turkey’s commitment to security in the Black Sea.

Post Views: 119
Previous Iran says conditions present for ‘win-win’ agreement with US
Next U.S. to Send Troops to East Europe to Counter Russia