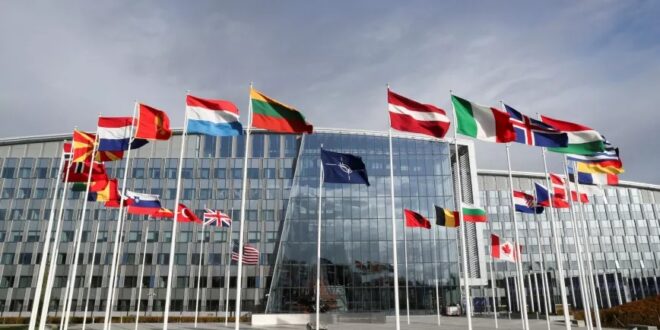 Should NATO Close Its Doors?

In their current confrontation with Russia, the United States and its allies are defending a dangerously anachronistic principle: that all of Russia’s European neighbors should be free to seek NATO membership and that NATO should be free to incorporate them.

Already, since the end of the Cold War the United States has extended security guarantees, in the form of NATO membership, to six former Warsaw Pact states and three former Soviet republics. Now NATO is continuing to insist that its door should remain open, that six remaining former Soviet republics, four of which border Russia, should be similarly free to apply and to be considered for membership.

The disintegration of the Soviet Union left Europe divided between NATO member states, prospective NATO member states, and Russia. Both Mikhail Gorbachev and Boris Yeltsin expressed an interest in NATO membership. Their inquiries were deflected while successive U.S. administrations insisted that all other former Warsaw Pact states and Soviet republics located in Europe could apply and be seriously considered for membership.

Russian President Vladimir Putin’s demand to the United States is that this option be foreclosed, and, in particular, that the United States not seek to extend its defense perimeter further along the Russian border. Washington has rejected this demand, arguing that spheres of influence such as that which Russia is seeking to preserve, represent an outdated and now illegitimate concept.

This argument may seem somewhat unpersuasive as a defense for the continued enlargement of a chief source of American influence, that is the NATO alliance. And one can only imagine how any U.S. administration would react if a potential adversary sought to extend its defense perimeter to the U.S. border. In fact, one does not have to imagine, because the Soviet Union once tried, and Washington’s reaction provoked the Cuban Missile Crisis.

Putin has repeatedly demonstrated that Russia is capable and willing to use armed force to prevent further NATO encroachment on its borders.

NATO’s expansion toward the Russian border has long antagonized Moscow. For many years Russia could do little about it. That has changed. In recent years, Putin has repeatedly demonstrated that Russia is capable and willing to use armed force to prevent further NATO encroachment on its borders. This is one reason why NATO’s open-door policy is an anachronism.

The other reason is the primacy accorded to the Chinese challenge by three successive American administrations. Commitments in Europe and the Middle East were supposed to be stabilized if not reduced in favor of rebalancing toward Asia. Undertaking to defend another of Russia’s neighbors over Russia’s vehement objections would indeed be a major new burden. Even increasing defense resources to Europe merely to hold open that possibility seems wildly inconsistent with settled and bipartisan American policy.

The dangers generated by NATO’s open-door policy are directed, in the first instance, at those who take the United States and its allies at their word. In 2008, at a NATO summit in Bucharest, the alliance’s leaders, prompted by President Bush, promised Georgia and Ukraine that they would one day become NATO members. It’s now 13 years later. Russia has invaded both countries and seized their territory either for itself or for Russian proxy regimes, leaving Ukraine and Georgia further from NATO membership than ever. Becoming a NATO member in waiting on the border of Russia leaves the aspirant in a most vulnerable position, provoking Moscow without committing NATO.

Yet even if one accepts that NATO’s open-door policy is anachronistic and dangerous, abandoning it under current circumstances could be more dangerous still. Closing the NATO door could save Ukraine from a Russian invasion and even enable it to recover some of its lost territory. Nevertheless, to adopt such a posture under Russian pressure would be interpreted, not least by the Ukrainians themselves, as an abandonment. Coming so soon after the U.S. and NATO withdrawal from Afghanistan, this would render such a devastating blow to American credibility and NATO cohesion that continuing to defend an outdated policy and an empty promise of future membership may appear preferable.

Becoming a NATO member in waiting on the border of Russia leaves the aspirant in a most vulnerable position, provoking Moscow without committing NATO.

Throughout the Cold War, Finland, Sweden, and Austria managed to carve out a peaceful and prosperous niche for themselves between East and West. One can imagine the development of an internationally bolstered status of neutrality for those of Russia’s neighbors that do not wish to align with Moscow and have little prospect of securing American-backed NATO security guarantees.

Achieving such an arrangement would require patient diplomacy and an extended period of trust building, which is unlikely while the present crisis persists. Yet however this current exercise in brinkmanship plays out, maintaining an open-ended process of NATO expansion is likely to produce further conflicts of the sort already experienced by Georgia and Ukraine.

Post Views: 81
Previous In Ukraine, Erdogan emphasizes agreements with Moscow
Next The Future and Past of War and Disease