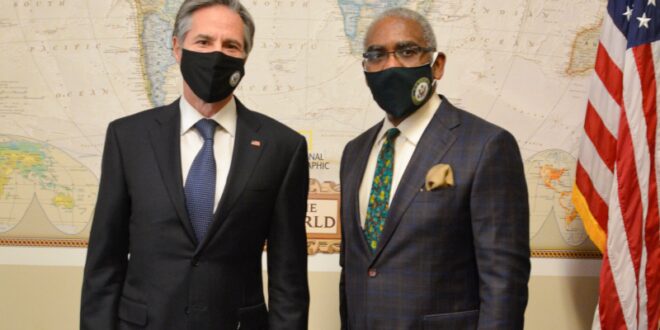 The US Black Political Class And War – OpEd

What should Black people think about the United States manufactured crisis in Ukraine? There are many details worth knowing. The most important being that Ukraine’s current troubles began with a U.S. regime change operation in 2014. The Barack Obama administration and NATO overthrew the elected president and sided with right wing neo-Nazi groups such as the Azov Battalion and the Right Sector. Of course destabilizing Russia was always the goal and should be immediately suspected whenever former Soviet republics experience any upheaval. As important as these facts are to understanding the current situation, there is more basic information which explains any and all international events that are designated as crises by this country.

The United States is determined to have hegemony, full spectrum dominance, over the entire world. This simple fact means that U.S. hands are never clean and Ukraine is no exception. There is no reason to expect a Russian invasion of Ukraine. The threat is as real as Saddam Hussein’s weapons of mass destruction. If nothing else, memories must be long enough to recall the war propaganda used in the past. To sum up, Black people should know that the U.S. has instigated this entire affair and any statements made by Joe Biden, his spokespeople, or his foreign policy team must be disregarded.

Joe Biden has quite literally created this supposed threat out of whole cloth. Any photos purporting to show Russian troop movements should be thought of in the same vein as Colin Powell’s dog and pony show at the United Nations in 2003. Powell said that ordinary trucks were chemical weapons laboratories yet the resulting invasion turned up nothing that George W. Bush claimed to be a legitimate pretext for war.

We must also know that members of the Black political class can never be counted on to work for the benefit of the people they are supposed to represent. Congressional Black Caucus (CBC) member Gregory Meeks of New York is the current chairman of the House Foreign Affairs Committee. Of course he wouldn’t get that position unless he was willing to go along with the war party consensus. Meeks recently traveled to Ukraine with a bipartisan delegation of House members and his comments were all in keeping with pro-war groupthink.

Meeks prattled on endlessly with time worn cliches which amounted to nothing more than demonizing Russian president Vladimir Putin: “Putin wins if he can divide us. He would love to divide some of our NATO allies, some of our EU allies and Ukrainians – divide us on this issue. [That] – would be a victory for him. So we can’t allow that to happen.”

Who is the “we” that Meeks refers to? Putting Black people in the first person with colonizers and imperialists is a sure sign of Black political class handiwork. He couldn’t possibly have meant the neo-Nazi Ukrainians put in power by the U.S. He went further though with even more fallacious reasoning and a disgraceful analogy:

Meeks’ constituents are a racial and ethnic mix, but half of them are working class Black people in his Queens, New York district. They don’t live in a democracy. They overwhelmingly voted for Joe Biden who couldn’t even keep his promise to get them a $2,000 stimulus payment. They depend on the child tax credit which has disappeared. If they are in the mythical American middle class it is because their families worked to send them to college but like most Black people they are saddled with student loan debt that Biden said he would relieve yet he has refused to do so.They live under decidedly undemocratic rule.

It isn’t clear how Dr. Martin Luther King became part of the Meeks fairy tale. King opposed the U.S. war machine and interference in the affairs of other countries. Yet his name is sullied by cynical politicians like Meeks to make the case for the kind of actions that King condemned.

Meeks introduced a House version of a Senate bill, Defending Ukraine Sovereignty Act of 2022 . The bill calls for sanctions against Russia and explicitly states that a key Russian demand be rejected, “…the United States is committed to a strong and unified NATO and will not cede to the demands of the Government of the Russian Federation regarding NATO membership.”

Gregory Meeks was always a CBC lesser light, but what of the members who were once reliably progressive? Barbara Lee of California is well known for being the only member of congress to vote against the invasion and occupation of Afghanistan. She is now a shell of her former self, unable to speak out even mildly against the U.S. threat to peace.

Lee and Progressive Caucus Chairwoman Pramila Jayapal created a joint word salad on the topic of Ukraine: “We continue to watch Russia’s threatening behavior towards Ukraine with alarm. There is no military solution out of this crisis — diplomacy needs to be the focus. We support the Biden Administration’s efforts to extend and deepen the dialogue, allowing for robust negotiations and compromise.”

If one is generous, Lee and Jayapal could be credited with calling for negotiations and compromise. But they couldn’t resist the “Russia-as-aggressor” trope, and in effect go along with Biden, whose dialogues with Russia have only worsened matters. “Russia’s strategy is to inflame tensions; the United States and NATO must not play into this strategy.” The only inflaming has come from Washington. Even progressives fail the people when they need them most.

In 2003, only 4 of 40 CBC members voted in favor of the authorization for use of force against Iraq. Nearly 20 years later, after going along with Obama’s invasion of Libya and now protecting another democratic president, the traditional anti-war consensus of Black people has been whittled down to nothing. Meeks’ chairing of the Foreign Relations Committee is proof of the degradation. Leadership among the democrats is a sign of failing the people. No one gets a position like that unless they are reliably imperialist.

House Speaker Nancy Pelosi is reportedly pushing through a bill which would provide Ukraine with $500 million in case of a Russian invasion. Of course, the provocations are on the U.S. side, and that means any proof of invasion is guaranteed to be spurious. When in doubt, remember the non-existent WMDs.

Colin Powell was the most prominent Black face in a high place before Obama was elected president. As Chairman of the Joint Chiefs of Staff and later as Secretary of State he was a key player in the first Iraq war, the invasion of Panama, the kidnapping of Haitian president Aristide, and of course making the case for a war of aggression against Iraq.

What passes for leadership is always a joke played upon Black people. The high water mark of the CBC being the “conscience of the congress” is long gone. No one can look to them on the issue of Ukraine or anything else. The people only have themselves to depend upon and must restore the historical Black radical consensus as a matter of survival. Unless that happens, WMDs and nonexistent invasions will always be used to make the case for terrible wrongdoing and that never benefits the masses of Black people.

Post Views: 94
Previous The Russians Are Coming: Are Beijing and Moscow at the Cusp of a Formal Alliance?
Next Budget For The Future – Analysis