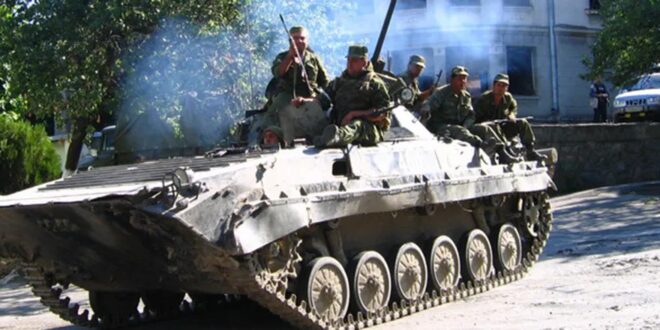 Russia Will Not Stop at Ukraine

The current confrontation is not only about Ukraine; it is also about Moscow’s attempt to stifle Georgia’s sovereign choices.

Late last year, Russia formally issued its extraordinary demands, effectively describing any further NATO enlargement in the post-Soviet region as a red line. Moscow is demanding legal guarantees on reversing NATO’s open-door policy and the decision of the Bucharest Summit of 2008, according to which Ukraine and Georgia will eventually become members of NATO. Moscow is furthermore aiming to achieve a new settlement in Europe by requesting NATO troops and missiles in Eastern Europe to be scaled back.

The tone and substance of the Russian demands provide no grounds for optimism for a diplomatic solution. In the meantime, Russia continues to amass up to 127,000 troops along Ukraine’s border and has started to move its troops and military hardware into Belarus for joint drills. The day after a recent round of intensive negotiations concluded in Vienna, Ukraine was hit by a massive cyber attack targeting major government websites and leaving a message for the Ukrainian public that they should expect worse to come. As diplomacy seems to be failing, the probability that Russia will move in and invade Ukraine once again seems high.

In fact, the current events around Ukraine bear a chilling resemblance to the beginning of the Russian military offensive in Georgia in August 2008, as well as the information operations that preceded the annexation of Crimea and the Russian aggression in Eastern Ukraine in 2014.

In 2008, Russia accused Georgia of starting a military attack and committing genocide in the so-called South Ossetia region, as a result of which Moscow had to intervene in order to defend Russian citizens and its ‘peacekeepers’ that were stationed in the region. Similarly, in 2014, Russian propaganda claimed that ethnic Russians were oppressed in Eastern Ukraine.

Currently, Russia seems to be laying similar groundwork for a new military offensive, by accusing Ukraine of intending to pursue a military attack in the Donbas region. Earlier, Russian Defense Minister Sergey Shoigu made claims that US mercenaries were preparing a ‘provocation’ with chemical weapons in Ukraine. Based on US intelligence, Russia has already planned a false-flag operation in Eastern Ukraine. By pre-positioning operatives who are trained in urban warfare and capable of orchestrating a sabotage operation, Moscow can fabricate a justification for its military action and intervene under the pretext of defending the Russian-speaking population in Ukraine.

As Ukraine faces this extraordinary security threat, Georgia is also on the menu. Both countries chose a democratic future in the early 2000s, with the majority of the Georgian and Ukrainian populations supporting integration into the European and Euro-Atlantic region. Russia, however, cannot afford for either of these countries to slip away from its sphere of influence. Russian frustration is not just about NATO enlargement: Moscow sees the precedent of democratic progress in both Ukraine and Georgia as a direct threat to its authoritarian regime.

Georgia already experienced a devastating war in 2008, resulting in the loss of 20% of its territory. Moreover, Russia is still using active measures, pursuing a policy of ‘borderisation’ by spreading anti-Western propaganda and undermining Georgian democracy from within through local enablers. Despite being a part of the current Russian ultimatum, Tbilisi is preoccupied by its internal political problems and does not feature heavily in the ongoing diplomatic discussions.

At the same time, public opinion has been divided in two. Some argue that Tbilisi must take a more proactive stance by openly expressing support for Ukraine, condemning Russian aggression and pursuing a more dynamic foreign policy agenda alongside the US and NATO allies. Proponents of this view stress Tbilisi’s moral and political responsibility to stand with Ukraine. Others contend that as a small country, Georgia can hardly hope to have a say in the rivalry between the great powers, and that it is better to stay quiet and avoid any possible provocation.

In fact, the last couple of years have been particularly challenging from a domestic political perspective. Georgia has experienced major turbulence, continuous street protests and increased political polarisation that is further deepening by the day. While Ukraine has great value for Moscow from a historical, geopolitical and cultural point of view, when it comes to Georgia, the Kremlin is playing a long game by encouraging chaos and political instability and inserting local enablers to increase its political influence.

The Trap of Neutrality

As the world witnesses how Russia is blackmailing the West, the pro-Kremlin local enablers are reviving the not-so-popular narrative of Georgian neutrality. This time, by pointing to Ukraine, the narrative is built around the idea that seeking NATO membership will bring nothing other than another Russian incursion and the loss of territory. By promoting fear, the Kremlin’s mouthpieces are trying to convince the population that staying neutral and renouncing NATO membership aspirations is the way forward to bring stability to the country.

In fact, by 2014, Ukraine had a ‘non-bloc’ status and was formally a neutral country. During the presidency of Viktor Yanukovych, Ukraine had no intention of joining NATO, yet Russia still went ahead with its military aggression in the Donbas region and seized Crimea. Thus, neutrality does not diminish Russia’s imperial ambitions in the post-Soviet region. The Kremlin’s aim is not just to keep Ukraine and Georgia out of NATO, but to make sure that both states fall directly within its sphere of influence, with political elites that are fully in line with the Russian political agenda. For Tbilisi and Kyiv, neutrality is a codeword for capitulation. Therefore, the only choice that Ukraine and Georgia have is between the Russian sphere of influence and the West.

It is not a coincidence that the question of Georgia’s neutrality is arising at a time of heightened tensions in the region. Recently, Russian Foreign Minister Sergei Lavrov claimed that Georgia is being forcefully dragged into NATO against the will of its people. Russian efforts will further intensify to diminish popular support for Euro-Atlantic integration through the use of disinformation and war scares. As long as the majority of the Georgian population is supportive of the pro-Western agenda, Georgia will always be on the Russian menu. It is only a matter of time until Russia decides to escalate. The only way forward is to increase societal resilience, deepen cooperation with NATO allies and counter Russian disinformation which aims to split societal opinion around Georgia’s future foreign policy trajectory.

The Lessons to be Learned

Both in 2008 and in 2014, the West underestimated the Russian threat. If Russia can get away with aggression yet again in Ukraine, it will fundamentally shift the European security order. European leaders’ flirtation with the Kremlin over the years has resulted in Russia imposing unprecedented demands for security guarantees, including requesting the departure of NATO forces from EU member states such as Romania and Bulgaria and an end to NATO’s open-door policy. The future of Ukraine is now entangled with the future of European security. With Russia testing Western unity, this could be the last chance for the West to unite and stand up against Russian aggression.

Post Views: 69
Previous Putin has Put Ukraine on the Horns of a Dilemma
Next Lessons from the Houthi Missile Attacks on the UAE