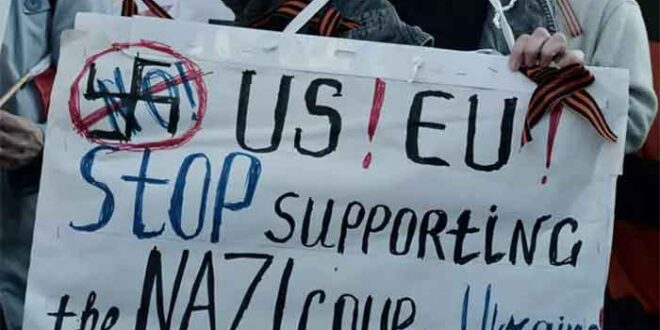 Scenario for a War in Eastern Ukraine: The United States Views Russians Just as the Nazi’s Did in World War II

“There is a sense of open, almost joyful viciousness in all this pro-war, anti-Russian sentiment on opinion pages and television broadcasts. It is certainly racist and demeaning in tone. Such is the first step in convincing the public that the “transgressor” is equivalent to a retrovirus.” John Stanton, Dissident Voice, 2015

Vietnam 2.0 is in the making in Ukraine. The US civil-military establishment, Republicans and Democrats alike, want a shooting war with Russia, even though it was the US that caused the carnage in Ukraine, not the Russians. Yet, that inconvenient reality has been nullified by the US propaganda campaign which, of course, the Russians have responded to with their own.” John Stanton, Counterpunch, 2015

Preparing for War with Russia Since 1992

As President Joe Biden announced the transfer of 2000 US troops to Poland and Germany on February 3, 2022, and the movement of an additional 1000 troops from Western Europe to Romania, I shook my head and looked to the sky thinking, “the United States and its elites really want a war with Russia, both economic and military. US generals want to use tanks, missiles, and aircraft against a near-peer competitor. They can’t beat sandal wearing insurgents in Afghanistan, so they want to mix it up with the A-Team, i.e., Russia.”

The announcement by the US administration that US troops would not be sent into Ukraine does not square with the fact that since post-February 2014 (US sponsored coup overthrew elected pro-Russian government), the US has been providing Foreign Internal Defense (FIDO) to the Ukrainian military, a fighting force riddled with neo-Nazis like the Azov Brigade. The US military and defense contractors have been busy supplying Ukraine with the tools, and training, of war making since 1992 For example, the Joint Contact Team Program-Ukraine (JCTP), the International Military Education and Training (IMET), the Foreign Military Sales/Foreign Military Financing, AeroVironment, Inc. (drones), Harris, Inc, (multiband radios). John Stanton, Pravda.ru 2015

Clark Gets the Last Laugh?

The Washington Post and New York Times and the major networks, NBC, CBS, ABC, CNN, FOX, et al, are salivating at the prospect of a Russian invasion of Eastern Ukraine, specifically the Donbass, home to separatist republics in Luhansk and Donetsk. As I wrote in April 2014, “There is a sense of open, almost joyful viciousness in all this pro-war, anti-Russian sentiment on opinion pages and television broadcasts. It is certainly racist and demeaning in tone. Such is the first step in convincing the public that the “transgressor” is equivalent to a retrovirus.” John Stanton, Dissident Voice, 2014

Presidents Bill Clinton, George W. Bush, Barak Obama, Donald Trump and now Joe Biden have pushed NATO expansion right up to Russia’s border. For example, Estonia and Latvia are NATO members. Estonia is 120 miles from St. Petersburg. NATO is purely a military alliance led by the USA. Its members serve simply military bases (some probably with tactical nuclear weapons) for US military forces and its many military contractors.

Is there any wonder that the President of Russia Vladimir Putin should be concerned? Are NAZI’s in the USA and NATO pushing the expansion of NATO, the racial hatred of Russians, and seeking a hot war? It is revolting.

And then there is the bashing of the Winter Olympics in China. Here is station KDRO in Colorado reporting on the “authoritarian” nature of the Olympics hosted by China. “The attendance of Russian President Vladimir Putin, Saudi Arabia’s Crown Prince Mohammed bin Salman, Egypt’s President Abdel Fattah Al-Sisi and others, will send out an image not just of China’s increasing distance from the West, but of an emerging bloc of Beijing-friendly authoritarian leaders.”

Just who has been selling weapons to Al-Sisi’s dictatorship in Egypt? The USA. Who has supported Saudi Arabia’s war in Yemen? The USA. Who Talk about double standards!

Attack Scenario, just a Guess: If Russia’s Hand is Forced by USA-NATO

Let us take the Dnieper River as a demarcation point for a Russian advance into Ukraine. Specifically, the eastern shores of the river, not the West. Then let us divide that Ukrainian territory that is immediately east of that river into North, Central and South.

There is a lot of talk in the mainstream media about the Russians taking the city of Kharkiv (second largest in Ukraine at 1.5 million) in the North. The Russians are unlikely to expend the manpower and ammunition stocks necessary for a siege of that city. Again, the Battle of Grozny will still be fresh in the minds of the Russian military, plus the fate of cities in Syria that were leveled by artillery and airpower just to get at a few hundred ISIS fighters.

Bypassing Kharkiv and heading West to Poltava might be part of Russian military planning. The city has two rail lines that connect north to Kiev and to Kharkov. The population is roughly 280000. Two large airfields sit just outside the city.

If the Russians advance from the North, they will likely use military resources from Belograd (tank battalion), Kursk (MIG aircraft, Iskander short range missiles) Bryansk (mechanized forces) and Smolensk (recon units), Voronezh (special forces, MIGs). Attacking forces would likely be led by autonomous Battalion Tactical Groups (BTGs) for a ground push to Poltava, if that’s in the cards.

The pattern of attack may be the use, initially, of drones, electronic/cyber warfare, missile fires/airpower and then the BTG advances. Such an attack from the north to the south aiming for Poltava and bypassing Kharkiv and leaving Kiev on the western banks of the Dnieper River alone would split the two largest cities in Ukraine apart.

Of course, there are dozens and dozens of smaller communities in the path that could provide headaches to the advancing forces, but it is apparent that much of the success for a Russian assault into North, Central and Southern Ukraine, just shy of the Dnieper River, depends on the support of the civilians in communities that are overrun, bypassed, or even laid siege. Good military planning suggests that Russians have partisans, sympathetic Ukrainians, or native Russians will have infiltrated areas where the Russian forces are aiming.

Russian military forces are already in Donetsk and Luhansk, just as US military advisors/defense contractors are in the trenches outside those cities training Ukrainian forces in antitank warfare, unconventional warfare.

A Russian offensive could start from any one of these locations or all of them: Millerova (MIGS), Shatky (mechanized troops), Gukovo (infantry), Kamensky (infantry). It is difficult to figure. Russian forces might eliminate the Ukrainian defenses outside the Donbass and drive north toward Pavlohrad bypassing Dnipro. Forces from Poltava in the north could drive south and hook up with those in Poltava. Zaporizhzia, a city split between the eastern and western side of the Dnieper, could be an enticing target for its airfield and its proximity to Western Ukraine. According to Wikipedia, ““Zaporizhzhia is known for its island of Khortytsia and Dnieper Hydroelectric Station. It is also an important industrial center producing steel, aluminum, aircraft engines, automobiles, transformers for substations, and other heavy industry goods.” Roughly 56 percent of the city’s 700,000 plus population are Russian speakers, so avoiding a Grozny scenario would depend a lot on Russian support within the city.

Melitopol is a transport hub with a rail system and a key highway system: the European E58 which runs from Vienna to Rostov-on-Don and the E105 that stretches from St. Petersburg to Yalta. Out of a population of approximately 150,000, 62,000 are Russian, according to the Results of the Intercultural Cities Index. Whether they would help support a Russian takeover of the area is up for question, but control of the highways and rail lines in Melitopol would be helpful perhaps as a Russian military jump off point to targets further in any direction.

Maripol and Kherson have to be in the planning for a takeover. Maripol sits on the Sea of Azov and the key M-14 highway runs through the city along the Ukraine’s southern coast. Kherson, a key Ukrainian port sits on the mouth of the Black Sea. Taking it would provide Russia with another naval base. Kerhson has a population of about 285,000 with roughly 45 percent of them Russian speakers. Mykolaiv, with a population of approximately 450,000 must be of particular interest to Russian military planners for its location right on the eastern side of the Dnieper, its airfield, and the fact that it is a key shipbuilding center. Again, Grozny comes to mind and so overtaking Ukrainian forces would be difficult without Russian partisans and sympathetic Ukrainians in the city.

Russian attack forces will probably come from Armyansk (Crimea, infantry, BTGs), Dzahnskoy (, Crimea, attack and transport helicopters), Tanganrog (airlift/AWACS, A-100s, A-50s). Russian warships and submarines are capable of firing cruise missiles at any of the targets in this attack scenario. It is unclear if Russia will chance an amphibious operations against Ukraine.

The Russians, with their T-90s and upgraded T-72s (tanks) will face US trained antitank platoons armed with deadly tank killer Javelin missiles (not wire guided). They’ll likely face Predator drones of some type armed with Hellfire missiles. The Ukrainians are dug-in all around Donetsk and Luhansk and on the border with Crimea. Minefields are a part of the Ukrainian defense mix of infantry, drones, and weaponry like the M141 bunker buster missile. News reports claim that the Ukrainians have been supplied with Stinger missiles, as well. Ukraine fields a tank called the T-64BV, an upgrade from older models. Ukraine will receive intelligence information from the USA.

No one knows if Russia’s Kaliningrad, sandwiched between Poland and Lithuania, will play any role in an attack on eastern Ukraine or if Transnistria, a separatist enclave in Moldova will play some supportive role for Russia. The Shanghai Cooperation Organization (SCO) that includes China, India, Pakistan, Uzbekistan—and other nations– may or may not support a Russian move into eastern Ukraine.

Post Views: 174
Previous The Hypocrisy of the ‘Diplomatic Boycott’ of the 2022 Beijing Olympics
Next US pips regional states at race for Kabul