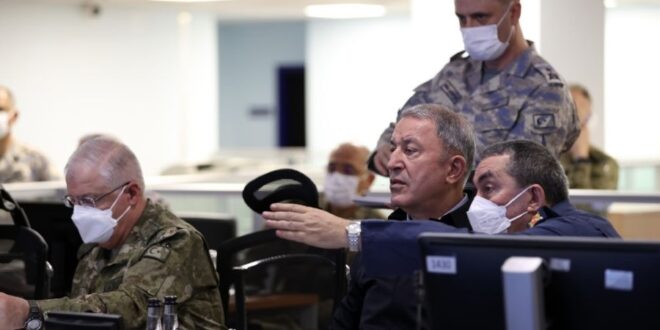 Turkey announced the beginning of an air campaign against “terrorist groups” on the border with Syria and Iraq, according to the Shaam News Network.

On Wednesday, the defense ministry of Turkey announced the launch of an air operation called Winter Eagle against so-called terrorists in the areas of Malikiyah – Derik, Sinjar, and Qarajiq –which they use as bases in northern Iraq and Syria, Turkey’s Anatolia news agency reported.

The operation aims to neutralize PKK / KJK / YPG terrorists and others, eliminate terrorist attacks from northern Iraq and Syria targeting citizens and security forces, and ensure border security, the ministry said in a statement.

“In line with the right of self-defense emanating from Article 51 of the UN Charter, Operation Winter Eagle was carried out against terrorist hideouts in the areas of Malikiyah, Derek, Sinjar, and Qarajiq, which they use as their bases in northern Iraq and Syria.”

The ministry pointed out that hideouts, caves, tunnels, ammunition depots, and the so-called command headquarters and training camps of the terrorists were targeted during the operation. It spoke about showing maximum consideration during the planning and implementation of the operation for the safety of civilian lives and property in addition to protecting the environment. The ministry confirmed the safe return of aircraft that participated in the operation to their bases, stressing the continuation of operations until the neutralization of the last terrorist.

Commenting on the operation, the head of the Turkish presidency’s liaison department tweeted that his country’s strategy of drying up the sources of terrorism contributes significantly to the security of the country’s borders, territorial integrity, and national unity. He explained that this strategy also serves world peace, stressing the need for greater support from the international community.